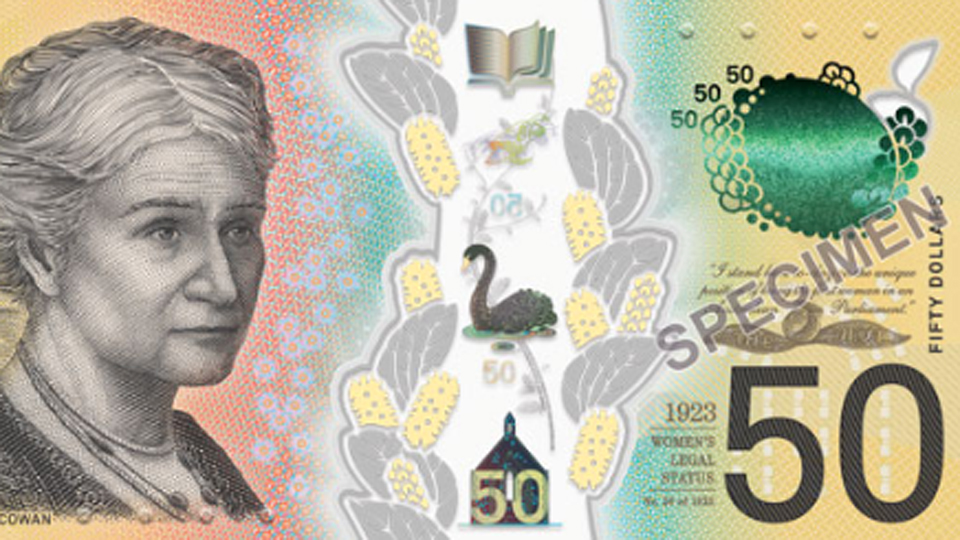 The Reserve Bank has been left blushing after a sharp-eyed consumer spotted a tiny but significant spelling error on the new $50 note.

Putting the $50 note under a microscope reveals an embarrassing typo in the reverse text, which features excerpts from Edith Cowan’s maiden speech to Western Australian Parliament.

The error was revealed by an anonymous caller to radio station Triple M on Thursday. The RBA later confirmed the mistake.

“The Reserve Bank of Australia is aware of it and the spelling will be corrected at the next print run,” a spokesman said.

After a hot tip from the @triplemmelb family, we’ve found the spelling mistake on the new $50 note! #BreakingNews

The new $50 entered circulation last October, and 46 million of them have been printed since then. The new note is similar to the one it replaced, with portraits of Aboriginal author David Unaipon and Cowan, who was the first female member of Australian parliament.

When the current $50 note was unveiled in 2018, Reserve Bank Governor Philip Lowe said its designed featured improved security and ease of recognition.

“David Unaipon and Edith Cowan were campaigners for social change and we are proud to continue featuring them on the $50 banknote. The new banknote provides the opportunity to tell more of the rich story behind these distinguished Australians,” he said.

“With the release of the $5 and $10 during the past two years, we are confident the Australian public are becoming familiar with the new banknote security features.”

Rare currency dealer Jim Noble from Noble Numismatics said this was the first time in its history the RBA had pushed a typo through to circulation.

“They do misprint notes but they’re individual happenings rather than the whole production,” Mr Noble told News Corp.

He said the proof would have gone through multiple approvals.

“Obviously someone would have to have looked at that enlarged and looked at the finished product before going to printing,” he said.

“How could that be approved? I’d say that’s a very serious and embarrassing error for everybody responsible. The buck stops with those who are producing it. It’s a joke for Australia, isn’t it?”

The embarrassing typo on the $50 note that we all missed