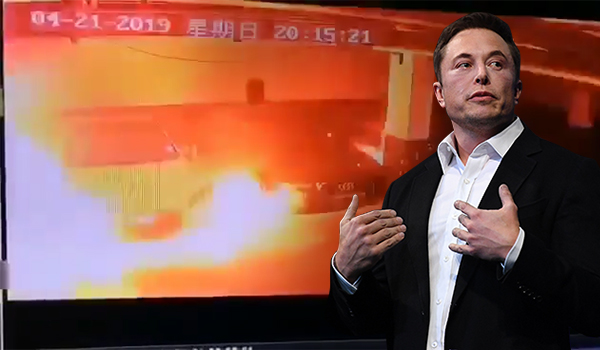 Footage of a parked Tesla appearing to explode has prompted the company to investigate. Photo: The New Daily

Elon Musk’s electric vehicle company, Tesla, has sent a team to investigate footage of one of the company’s cars appearing to explode.

In a statement posted to Tesla’s official Weibo account, the company said it has sent a team to investigate the incident, which the video timestamp indicates took place on Sunday evening (local time).

“After finding out about this incident in Shanghai, we immediately sent a team to the scene,” Tesla said on its official Weibo account.

“We are currently contacting relevant departments to understand the situation. Based on current information, no one was hurt.”

Reuters was not immediately able to verify the origins of the video, which Weibo users said was taken in Shanghai.

The reports of an exploding Tesla come as the company attempts to revive its sales in China . They have been hit by China-US trade tensions.

The company imports all the cars it sells in China, but is building a factory in Shanghai that will manufacture Model 3 cars in the initial phase and help it minimise the impact of the trade war and tariffs.

Earlier in April, Mr Musk unveiled an ambitious plan to convert 86 hectares of farmland outside of Shanghai into a new factory that would produce Model S vehicles within one year.

The detonating Model S is the second setback to rock companies related to Mr Musk this week, after tests conducted on a SpaceX’s Crew Dragon rocket resulted in an ‘anomaly’ which, according to Florida Today,  blanketed NASA’s Cape Canaveral in smoke for several hours.

NASA administrator Jim Bridenstine confirmed that SpaceX had provided the space agency with a report on the ‘anomaly’, adding that identifying issues like this was the reason rockets are tested.

“NASA has been notified about the results of the SpaceX static fire test and the anomaly that occurred during the final test. We will work closely to ensure we safely move forward with our commercial crew program,” he said.

Tesla’s fortunes have oscillated wildly in the past year as investors increasingly question promises made by Mr Musk.

The share price also took a hit in 2018 after the US Securities and Exchange Commission ousted Mr Musk, the company chair, after the billionaire entrepreneur’s joke about a possible share buyback caused “significant market disruption”.