Pressure is mounting on the Reserve Bank to cut rates. Photo: Getty

Australia’s official cash rate will remain on hold at 1.5 per cent for a record-breaking 31st consecutive month, the Reserve Bank of Australia has revealed.

The record low level of interest rates is “continuing to support the Australian economy” while gradual progress in “reducing unemployment and having inflation return to target” is made, RBA Governor Philip Lowe said in a statement following the RBA board’s March meeting on Tuesday.

While the outlook for the global economy “remains reasonable … downside risks have increased” he said.

“The global economy grew above trend in 2018, although it slowed in the second half of the year. The slower pace of growth has continued into 2019.”

Dr Lowe cited trade tensions as a “source of uncertainty”, as well as the slowdown of global powerhouse China’s economy.

On the upside, Australia’s labour market “remains strong”, with a “significant increase” in employment.

The unemployment rate is expected to decline from 5 per cent to 4¾ per cent “over the next couple of years”, with a high vacancy rate and “reports of skills shortages in some areas”.

“The stronger labour market has led to some pick-up in wages growth, which is a welcome development,” Dr Lowe said.

“The improvement in the labour market should see some further lift in wages growth over time, although this is still expected to be a gradual process.”

However, other indicators suggest Australia’s economic growth slowed in the second half of 2018.

“The central scenario is still for the Australian economy to grow by around 3 per cent this year,” Dr Lowe said.

With economic headwinds rising, pressure is mounting on the RBA to cut the already historically low cash rate.

There is a “growing possibility that rates could fall later this year”, CoreLogic head of research Tim Lawless said.

A “sharp slowdown” in residential construction activity combined with “relatively benign” retail trade figures may be hinting that weak housing market conditions are already spilling over to the broader economy, Mr Lawless said.

Australian National University’s RBA Shadow Board found that while keeping interest rates on hold was the “appropriate” decision, the prospect of a rate cut is rising.

While real wages growth has ticked up marginally, consumer and business indicators paint a mixed picture, Chair of the RBA Shadow Board Dr Timo Henckel said.

“The Board is 62 per cent confident that keeping interest rates on hold is the appropriate policy, up six percentage points from February,” Dr Henckel said.

A survey of 31 leading experts and economists by comparison site Finder showed overwhelming bearishness on key issues of employment and wage growth. 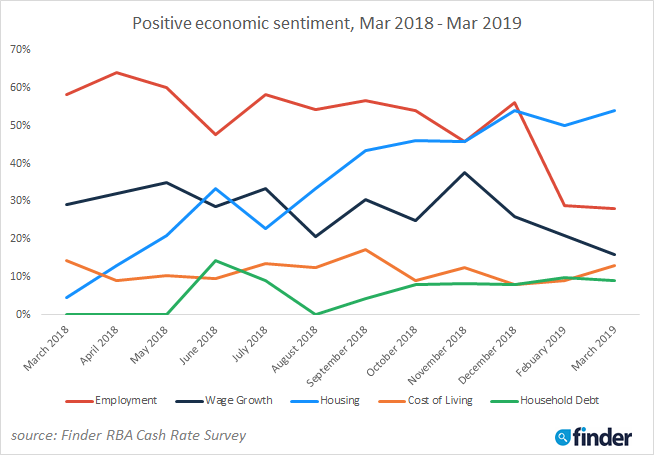 Australians ease up on shopping

Retail trade contracted in February to its lowest level since 2012 as consumer spending dried up, a trend reading by an industry index suggests.

The Ai Group’s Performance of Services Index released on Tuesday recorded a second straight month of contraction in the Australian services sector in February.

Although the index reading improved 0.2 points from 44.3 in January – when a sharp contraction snapped a 22-month positive run stretching back to early 2017 – it still remained below the 50-point mark separating expansion and contraction.

Retail trade slipped further into contraction, falling 2.9 points to 39.9 and the lowest result since August 2012.

“The consumer-focused segments were largely contractionary with weakness in consumer spending across the majority of these sectors with retail and hospitality faring the worst,” Ai Group chief executive Innes Willox said.

“Consumer sentiment has fallen faster and more intensely than the business-oriented sectors as concerns around house prices, residential construction activity and the all-pervasive talk of slowing economic conditions take hold on consumer sentiment.”

Three of the four consumer-oriented sectors monitored by the PSI index contracted in February, with only the “personal, recreational and other services” expanding.

“Services businesses reported weak customer demand in February due to extreme heat and drought conditions in some areas of Australia, flooding in others and a deterioration in consumer spending.”

RBA leaves rates on hold as consumer spending dries up