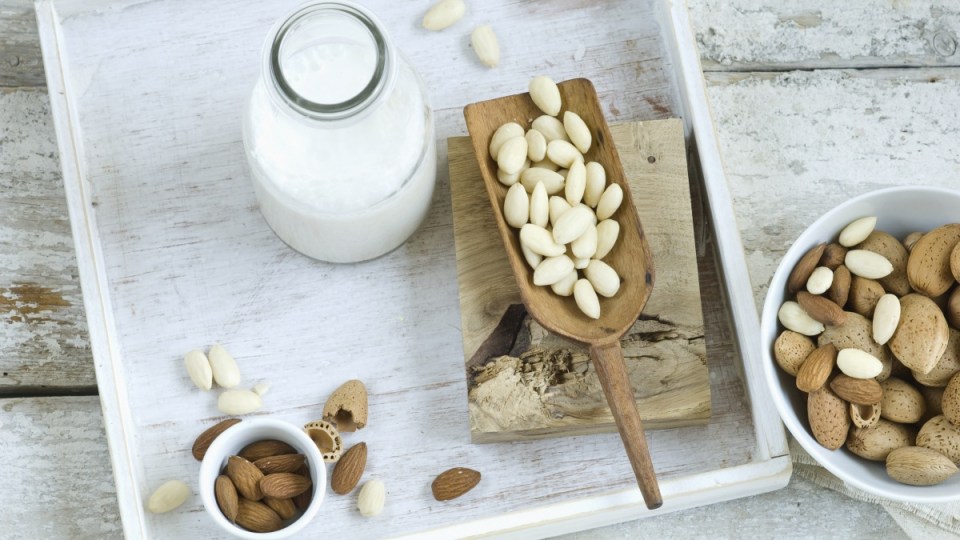 Almond milk and other plant-based milks are not necessarily a direct substitute for cow's milk. Photo: Getty

Consumption of nut-based ‘milk’ alternatives – such as almond milk and coconut milk – have grown by a massive 90 per cent in two years alone, but this new obsession may be depriving Australian consumers of calcium.

“We know that almond milk is generally 5 per cent nuts and the rest is water,” he said.

“It’s a bit of a joke to call it milk because it’s not really milk at all.”

The federal government is pushing for a crackdown on these so-called ‘fake foods’. 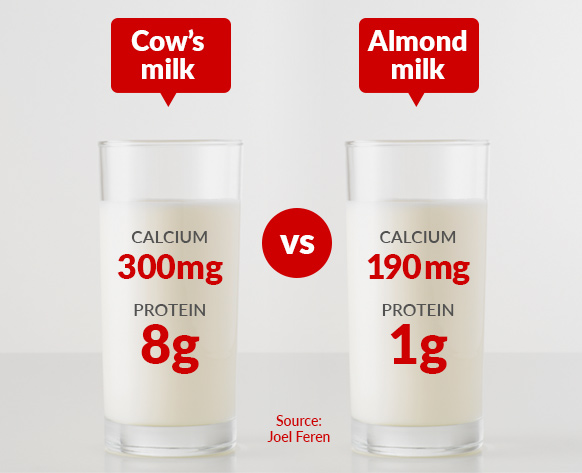 “I want consumers to have confidence that when they buy honey, it’s honey — when they buy meat, it’s beef from an animal, and when they buy milk, it is actually produced by a dairy cow,” Regional Services Minister Bridget McKenzie told the ABC on Thursday.

Dairy advocacy group Dairy Connect chief Shaughn Morgan suggested these products could be labelled as “almond juice” or “almond water” to help consumers recognise it as a separate product. That proposal follows new laws in France that prohibit the use of the term “milk” on labels describing plant-based products.

About 54 per cent of consumers believe milk alternatives are healthier, while just 17 per cent buy them due to allergies or intolerance, according to Dairy Australia.

Senior industry analyst at IBIS World Bao Vuong said the boosted demand of alternative milks has been largely driven by a general perception that these products are healthier than full-fat milk.

But nutritionist Catherine Saxelby said this is not necessarily the case.

“Nut milks are low in protein and unless they are fortified they’re low in calcium. They should not be used as a substitute for cow’s milk,” she told The New Daily, adding “especially for young children, growing teens or pregnant women.” 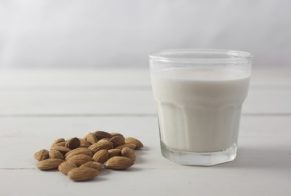 About one-third of alternative milk products do not contain calcium. Photo: Getty“They don’t give you the same amount of protein, calcium or phosphorous.”

Ms Saxelby said that, nutritionally, the best milk – if you’re not going to drink cow’s milk – is soy milk.

“Nut milks like almond milk and macadamia milk shouldn’t be used in the same way as cow’s milk,” she said.

“Most of these ‘milks’ in the supermarket are fortified, so they have added calcium, but there’s a big question mark as to how well that’s absorbed.

“They’re also more processed, and they’re not the same as the fresh cow’s milk you buy in the supermarket.”

“It’s extremely misleading to consumers,” she said. “Even almond milk cannot be compared to soy milk, or rice milk or any other product.

“People need to know what they are getting from a packaged food product, so it’s important to read the ingredients list to check for things like calcium.”

Australians’ obsession with nut milk may be depriving us of calcium