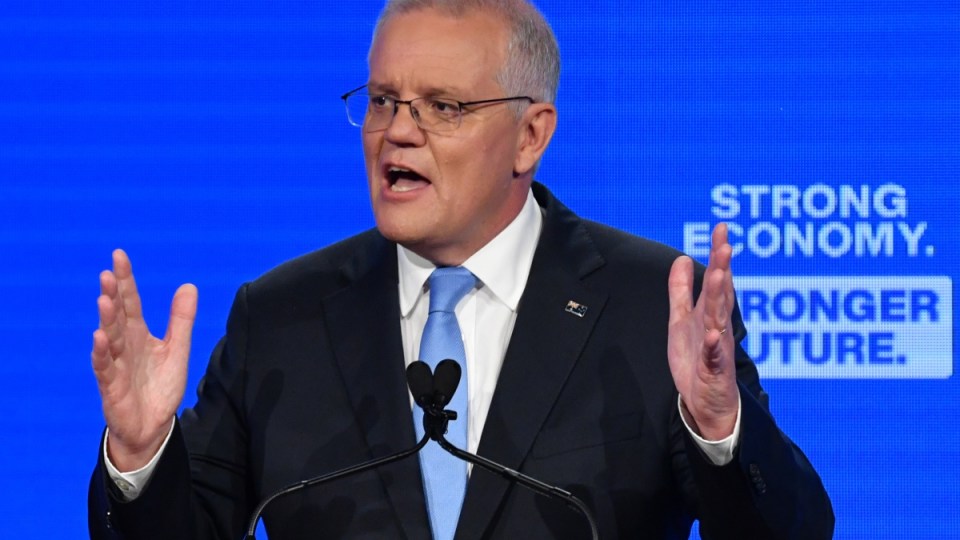 The Prime Minister is promoting the superannuation plan as key to easing the national housing crisis. Photo: TND

Scott Morrison has made housing policies for young and old a central part of his address at the Liberal Party’s official campaign launch, days before Australians go to polling booths.

A re-elected Coalition government will allow first-home buyers to access their superannuation to buy a home, while people over 55 will be able to put $300,000 in their retirement nest egg from the proceeds of downsizing to a smaller home, freeing up larger properties for families.

“Superannuation is there to help Australians in their retirement,” the Prime Minister told the party faithful in Brisbane on Sunday.

“The evidence shows that the best thing we can do to help Australians achieve financial security in their retirement is to help them own their own home.”

Under the Super Home Buyer Scheme, first home buyers will be able to invest up to 40 per cent of their superannuation, up to a maximum of $50,000, to help with the purchase of a first home.

The scheme will apply to new and existing homes with the invested amount to be returned to their superannuation fund when the house is sold, including a share of any capital gain.

Meanwhile, from July 1 up to 1.3 million empty-nesters and pensioners will be able to access incentives to downsize their houses, in a plan to help more families get a home.

Pensioners who downsize will also be given greater flexibility by exempting the proceeds of the sale of the property from the assets test for a longer period.

This change means pensioners will now have two years to structure their assets following the sale of their home without impacting their pension.

Currently this benefit is available to Australians over the age of 65 and making this change will see up to 1.3 million people become eligible to access it.

Housing Minister Michael Sukkar said it had been a successful policy since 2017.

“We know it works, we know it is freeing up housing stock, those larger family homes for other people to be able to purchase,” Mr Sukkar told Sky News’ Sunday Agenda program earlier.

“It is removing the barriers to downsize and essentially for couples being able to put up to $600,000 into a concessionary taxed environment like super.”

Labor senator Murray Watt said his party would always back a good idea.

“We will support this one. We think this is a good idea worth taking on,” he told Sky News.

“But the reality is that just one announcement from this government after nearly a decade in office is not going to fix the housing crisis we see in Australia.”

The Prime Minister has promised to change his ways in the past couple of days in an attempt to lure undecided voters, but Liberal deputy Josh Frydenberg – seen as a future leader – still believes Mr Morrison is the right man for the job.

Asked on ABC’s Insiders program on Sunday whether the Coalition would be faring better under his leadership, the Treasurer said: “No.”

“Scott Morrison is the right person to lead both the government and the country,” Mr Frydenberg replied.

He believes there has been a benefit from having stability at the top of the party and says the prime minister has done an outstanding job in difficult times.