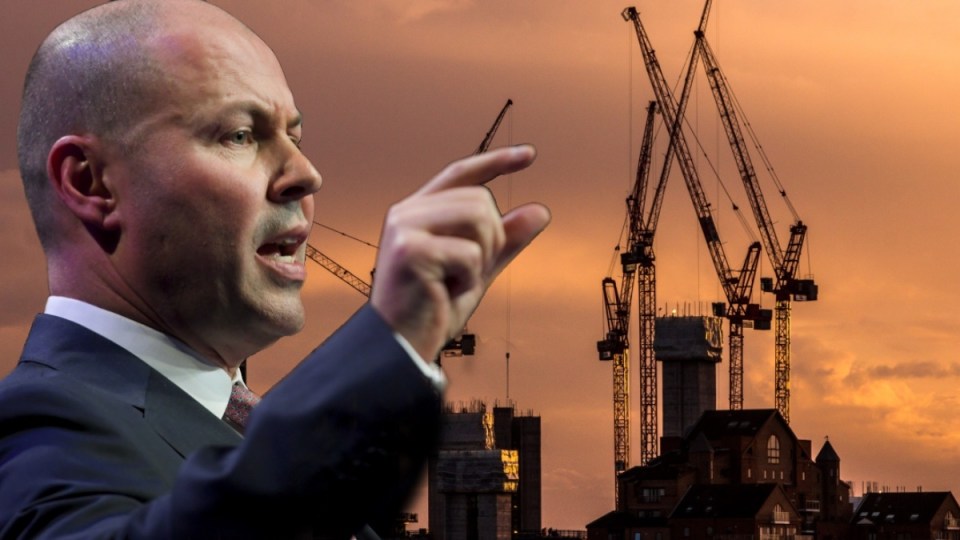 Budget announcements on infrastructure spending should be taken with a grain of salt, Michael Pascoe writes.
opinion

It’s likely the usual recipients of the “drop” will fall for it again, too. And this time the Treasurer will have some bigger figures to purloin as part of his process.

The latest outlook from Macromonitor, an industry research and forecasting company, shows three years of transport infrastructure boom will have that sector overtake spending on houses and non-residential building in the 2023-24 financial year.

After being relatively flat over the past two years, transport infrastructure construction took off this financial year and will keep rising for the next two to peak at $50 billion (in constant dollars). 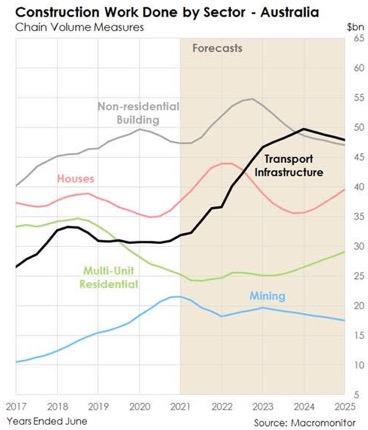 But despite the millions of dollars the Morrison government spends on advertising transport spending, the vast majority of that money continues to come from state and local government.

Since Joe Hockey’s first budget in 2014, the Coalition has run a budget night ritual of plugging a big number for infrastructure spending – a number concocted by adding up an unforecastable number of years to get to it.

Treasurers Morrison and Frydenberg have used a round decade to achieve their headline numbers, never mind that the Macromonitor experts last year observed that “spending programs over a 10-year period should be considered indicative at best”.

In Scott Morrison’s case, the con was used to camouflage that he was reducing infrastructure investment to $7.5 billion a year from the $8.3 billion a year Joe Hockey was promising, which in turn was a reduction from the previous Labor government.

Josh Frydenberg did increase the nominal annual spend pledge to $10 billion in his 2019 budget and tweaked it to $11 billion in the 2020 COVID budget, maintaining that level last year.

In real terms though, by the middle of the promised decade of spending, it will be about the same in real terms as in Hockey’s 2014 budget.

The outlook for cooling house and non-residential construction over the next couple of years makes the transport investment more important from the impact on the overall economy, but a substantially different workforce is involved.

Macromonitor economist and report author Natalie Senga said roads construction accounted for more than half of the increase.

“We are forecasting an additional $8 billion in spending over the next two years,” she said. “This precipitous rise has been made possible through accelerated government spending on shovel-ready projects and a fast-track approval system established since 2020.” 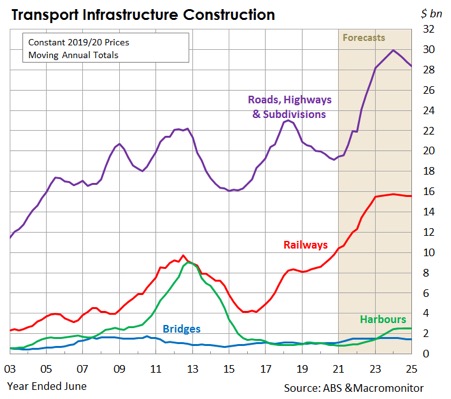 Another Macromonitor graph demonstrates that the recent lift in spending has come primarily from smaller projects, the usual stuff of state and local governments rather than big projects each consuming at least $300 million a year, the projects politicians most like to announce as many times as possible.

There has been little change over the past year in Macromonitor’s major transport infrastructure counting. 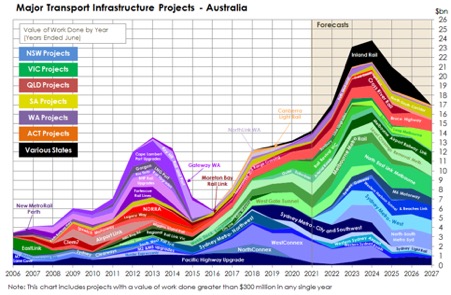 The less promising news is that Macromonitor anticipates a downturn once the current wave of big road and rail projects moves to completion “and as the budget circumstances of state governments become less conducive to further expansions of capital spending”.

Ms Senga said the downturn period is expected to occur from 2024-25, but the long-term outlook will still be characterised by high levels of spending, averaging $40 billion per year between 2026 and 2031.

Macromonitor talks in constant dollars while the federal Treasurer’s spinning is done on nominal dollars.

Thus Josh Frydenberg’s headline pledge will be financing less than a quarter of the investment in the second half of this decade – not that the Commonwealth government advertising would give any hint of that.