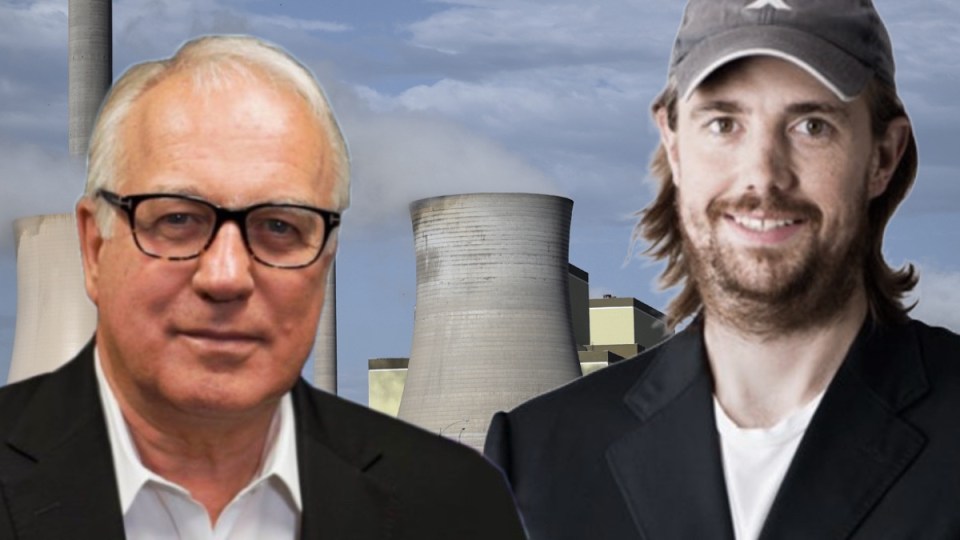 Michael Cannon-Brookes has dug a pit in front of Scott Morrison, which the PM seems quite happy to step into.

Between them, AGL Energy and the Coalition have been among Australia’s biggest emitters of nonsense about climate change, and the biggest roadblocks to the energy transition.

To try to have it both ways and win the election, the Morrison government has made a cardboard cutout of a plan for net zero by 2050, but instead of celebrating the early closure of AGL’s coal-fired power stations offered by Cannon-Brookes and Brookfield Asset Management, the government is talking about preventing it.

And the Minister for Emissions Reduction Angus Taylor said he was “bitterly disappointed” about Origin’s decision to reduce emissions by closing the Eraring power station early.

With urban seats under siege from climate change independents, these may not be great career moves.

Meanwhile, AGL’s acquisitions of the Loy Yang A, Liddell and Bayswater generators between 2012 and 2014 were a colossal disaster for its shareholders, who have lost about $5 billion as a result.

Those acquisitions also turned Australia’s biggest energy retailer into an obstacle to action on climate change at precisely the wrong time for the country.

Now a couple of rich investors want to buy AGL and turn it into a transition accelerant instead of retardant, but Scott Morrison’s immediate reaction is to say: “We need to ensure that our coal-fired generation of electricity runs to its life”.

No, we don’t. We need to ensure they close as soon as possible, which is what Brookfield Asset Management and Michael Cannon-Brookes are proposing to do.

Moreover, after spending $5 billion to buy AGL and taking on $3 billion of its debt, they say they’ll spend another $20 billion on new renewable generation.

But you don’t need to buy AGL to spend $28 billion on renewable energy, so why do it?

Michael Cannon-Brookes told me on Wednesday that it’s about getting access to AGL’s 4.5 million customers as a guaranteed market for the renewable electricity he plans to generate, and control of its sites.

“We’ll reuse the existing grid connectivity from those power stations,” he said.

He also said taking AGL private would make a “huge difference” in bringing forward the transition to renewables, by not having to pay a dividend, not having to report results and having a lower cost of capital.

But the main benefit is that AGL – plus Brookfield’s existing assets – would become a powerful, vertically integrated electricity company, owning generation, transmission, distribution and retail – if the ACCC approves, that is, which is far from certain.

Brookfield already owns transmission and distribution assets in Victoria, so it would be the first private operator to own all four levels of the electricity business in a state since the SEC was sold.

Cannon-Brookes is presenting the deal as an act of altruism as much as an investment, but he wouldn’t tell me whether Scott Morrison was right when he said the deal was 80 per cent Brookfield and 20 per cent him, or whether he will accept a lower return on the investment than Brookfield.

Anyway, it’s clearly an investment, designed to make money, with a big reduction in Australia’s carbon emissions as a by-product.

AGL’s board has rejected the price as “ridiculously low” and it seems Cannon-Brookes and Brookfield are prepared to offer more since they are still talking, but the price already looks quite high.

Specifically, they’re offering about $1000 per customer for the retail business, which is mainly what they’re buying (since the power stations are basically worthless).

But in 2007, AGL paid $2219 per customer for Powerdirect and in 2010 Origin paid $2179 per customer for Integral Energy and Country Energy, so there is a wide range of prices paid for electricity retailers, and Cannon-Brookes and Brookfield could no doubt justify something higher than $1000 per head for AGL’s treasure if they really wanted to.

On the other hand, competition is increasing enormously and churn is up to 40 per cent through cold-calling and comparison sites. Tier 2 power companies that are scrapping for low-margin business pay about $150 to $200 per customer to comparison websites and aggregators.

AGL’s customers are the stickiest – they are the ones that haven’t churned and have shown that they don’t really want to shop around, so they’re worth more.

Nevertheless, the electricity business is getting complicated and risky, because artificial intelligence is increasing churn and driving profit margins lower.

For example, Tesla’s Autobidder software allows the owners of grid-scale batteries to choose the best times to charge them, thereby lowering prices, and a Melbourne firm called SpendWatt has an AI platform that interrogates retail customers’ bills and automatically switches them to the cheapest suitable provider.

Cannon-Brookes told me that he sees AGL as a software play as much as an energy transition play.

Telstra made a lot of this in a submission to the Energy Security Board in September, saying that “consumers who can throttle, defer and accelerate their assets & activities are best placed to take advantage of market conditions for both commercial benefit and improved resilience” and “the potential of the industrial user market for Demand Response is even larger than the residential opportunity”.

If the government ever got serious about encouraging demand response, the opportunity to reduce emissions could be dramatic.

AGL’s plan to hive off the coal-fired power stations into a separate company will make no difference to any of this: It is simply putting its problems into a rowboat and pushing it away from the ship with a long pole.

Michael Cannon-Brookes’ plan is to amputate, and good on him.

If he pays too much and loses money in the process, well, that’s can-do capitalism for you.

Alan Kohler: What the takeover bid for AGL is all about