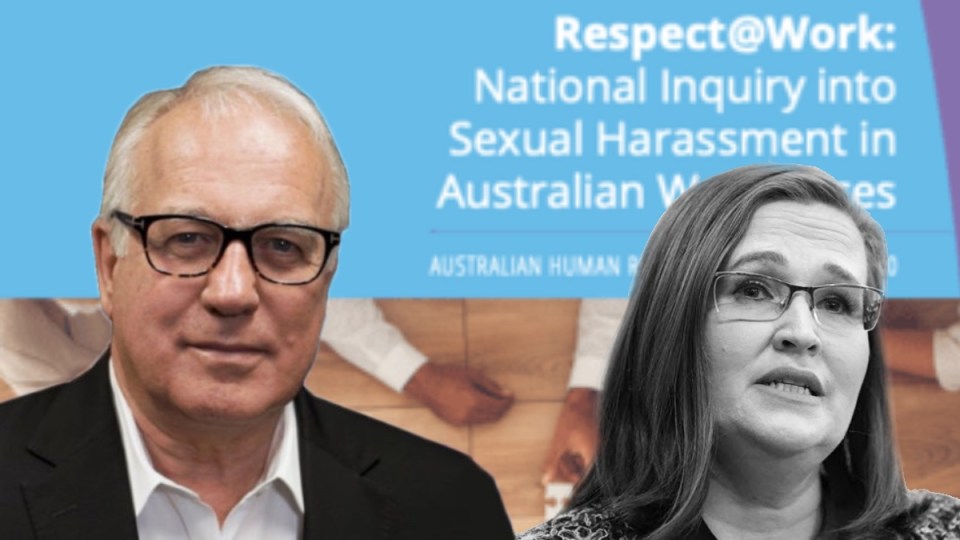 The case of former Victorian judge Peter Vickery last week is a warning to the leaders of every organisation that they should either commission a report into their workplace culture like Rio Tinto did, or act as if they had and got the same, shocking result … because they probably would.

An independent inquiry appointed by the Victorian Supreme Court upheld complaints of sexual harassment against Vickery by two female associates, and on Thursday he issued a 900-word statement protesting his innocence and apologising at the same time.

He clearly had no idea what he had done, or is in denial about it.

“I am a kind, tolerant and fair-minded person, but have been painted in the Investigation otherwise,” he wrote. “I never for a second believed that anything I did may have hurt two of them.”

What he did was attempt to woo an associate 40 years his junior, writing her love poems and asking her out on a date.

She later said: “I wanted to cry but could not because I was at work. I was absolutely paralysed with fear. I did not want to go on a date with him and I did not know what to do. I was so worried that if I rejected him, my career would be over.”

This sort of thing does not just go on in the law, but in all male-dominated hierarchical organisations.

The point highlighted by the Vickery case and to some extent the one involving High Court judge Dyson Heydon, is that what might be called the “managerial male” and the women who work for him can sometimes exist in parallel universes in terms of what is actually happening, let alone what is acceptable.

This puts the onus squarely on the leaders to not only protect women but to better educate men.

But there is a lot more to what’s happening than so-called misunderstandings as bosses try to show their ‘affection’; it’s also about actual assault and rape. Women are not taking it any more.

We are living through another profound shift in the power balance between men and women, and the way relations between us operate.

It was kicked off with the #MeToo movement in 2017, and the allegations against Harvey Weinstein. In Australia it was about Don Burke, at about the same time.

Some call this the fourth wave of feminism, but as Jess Hill wrote in her November 2021 Quarterly Essay: “at its heart, this is an accountability movement …”

“… this time women aren’t just sharing what happened to them – they’re pointing the finger. It’s not just about I was raped, but he is the one who raped me – and they are the ones who protected him.”

Pahari was a rainmaker, a ‘key person’ for AMP, because some of its investment mandates were conditional on him being there, so the complaint resulted in him losing some of his bonus while Szlakowski left the company.

The lesson from AMP is that no employee can ever be above the consequences of sexual harassment or worse, but the experience of Rio Tinto is that sexism, along with bullying and racism, can be systemic, and probably usually is.

After the destruction of the irreplaceable Juukan Gorge by Rio Tinto in May 2020, which resulted in a wave of revulsion against the company and the departure of its CEO, Rio commissioned former sex discrimination commissioner Elizabeth Broderick to review its workplace culture.

The result was both shocking and not. About 28 per cent of its female workforce had been sexually harassed; among women under 25 it was more than a third, and for those aged 25 to 34 it was 38.7 per cent.

Women who spoke to Broderick’s firm described colleagues and managers frequently making sexual advances and/or sexually explicit comments to them.

They talked about being left out of decisions and being overlooked for progression, being asked to take notes and get coffee, of being afraid to tell managers they were pregnant and of so many obstacles to getting flexible work arrangements.

How many companies, especially male-dominated ones like mining companies, can honestly say they wouldn’t get a similar report card if they had the same searching examination?

In any case, all businesses should either find out what’s going on or assume the worst, and take steps to address it as Rio Tinto is now doing.

As Jess Hill wrote in her essay, it’s not just about sexual violence, but about power and safety.

Two years ago, the current sex discrimination commissioner Kate Jenkins equated it with workplace safety in her Respect@Work report, and recommended that the Sex Discrimination Act be amended to include a positive duty for employers to prevent workplace sexual harassment and bullying, with new powers to enforce it.

Jess Hill pointed out that sexual harassment is like a workplace injury, except that the onus is on the victim to complain rather than the employer to maintain a safe workplace.

As she wrote: “Remember – sexual harassment is not just unfortunate, it is illegal. And yet one in three Australians is subjected to it, in every conceivable workplace …”

“Worse still, the process of reporting sexual harassment can end up being so punishing that victims actually get sicker from the process than from the harassment itself.”

The government has implemented just six of Jenkins’ 55 recommendations and last week, almost two years after her report was published, Attorney-General Michaelia Cash began consultation on the rest.

The legislative response has been far too slow and timid, but so has that of the business world.

In particular, the Business Council of Australia should be taking leadership in giving women a fair go, instead of making yet another tired demand for lower wages, more immigration and less red tape, as it did last week in its 2022 budget submission.

Alan Kohler: Business leaders must lead in the empowerment of women