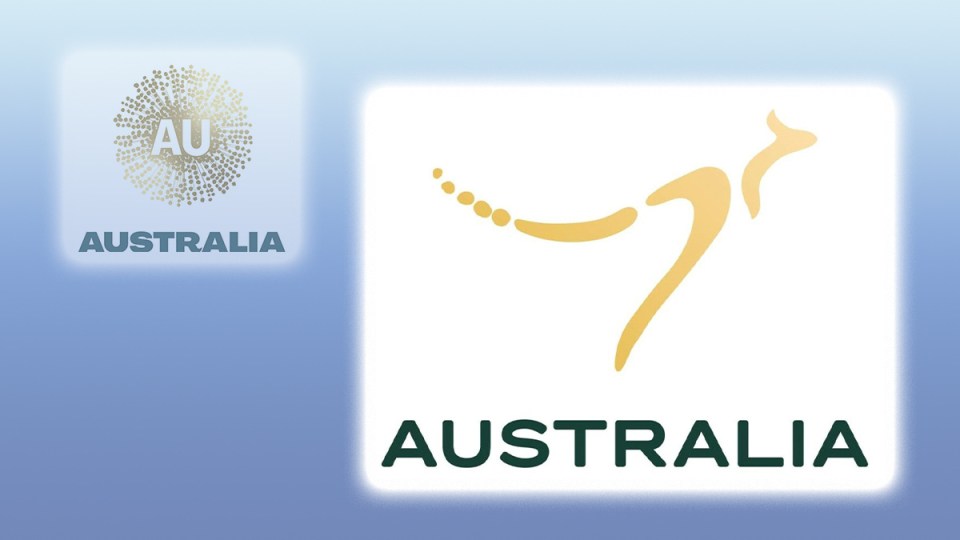 The new Nation Brand logo features a golden kangaroo above the word ‘Australia’ and is accompanied by the tagline ‘Only in Australia’.

It replaces an earlier $10 million logo that was quietly ditched last year after users on social media said it looked similar to a COVID molecule.

The body of the logo’s kangaroo is formed by three boomerangs, with the head a hooked ‘7’ boomerang used in ceremonies as a percussive instrument for song and dance, said Yanyuwa man, Balarinji chair and cultural director John Moriarty.

“The body and tail are boomerangs used for hunting or foraging for food, or to connect with softwood to spark fire,” Mr Moriarty said.

“This kangaroo tells the story of Country, of belonging and of living sustainably.”

Looking for redemption with new logo

The new logo comes after the Brand Advisory Council’s ill-fated 2020 attempt – inspired by Australia’s national flower, the golden wattle – was ridiculed for looking like a COVID molecule.

The previous logo was completed in late 2019 and cost taxpayers $10 million.

But it was released in July 2020, after the pandemic had started.

At the time, then-Trade Minister Simon Birmingham told Sydney radio 2GB the logo was being carefully looked at due the unflattering associations people were drawing.

It was later quietly dumped, as The New Daily reported at the time.

When the first logo was released in 2020, Deakin business school marketing expert Michael Callaghan told TND it drew more on connections with mining, and virtually no real connections towards Australia because it didn’t have “anything memorable in it”, such as kangaroos.

Modelling by Deloitte Access Economics (DAE) found a 1 per cent improvement in Australia’s global brand ranking would increase merchandise exports by more than $3 billion per year and boost tourism by $174 million per year.

Trade Minister Dan Tehan said on Friday that Australia’s Nation Brand is more than just a logo and tagline – it is part of a “holistic approach” to selling Australia’s unique qualities to the world.

“A strong nation brand and tagline will reinforce Australia’s reputation as an internationally competitive investment destination, a great place to visit, a quality provider of education, and a trusted exporter of premium goods and services,” Mr Tehan said.

“Australia’s Nation Brand is more than just a logo and tagline. It is a holistic approach to selling what is unique about Australia to the world,” Dr Forrest said.

The new Nation Brand logo’s golden kangaroo bears a striking resemblance to the Australian Made, Australian Grown trademark logo, which signifies products whose ingredients or production mostly originate from Australia.

Australian Made Campaign chief executive Ben Lazzaro said the Australian Made logo will be unaffected by the new Nation Brand logo, but he emphasised that “appropriate governance and policing measures” should be taken to ensure the Nation Brand is able to “comfortably co-exist” with other brands and initiatives.”

Chris Hemsworth takes on unexpected role in new action flick … and it’s not what you think
Michael Pascoe: Be careful what you wish for to cure inflation
Today's Stories