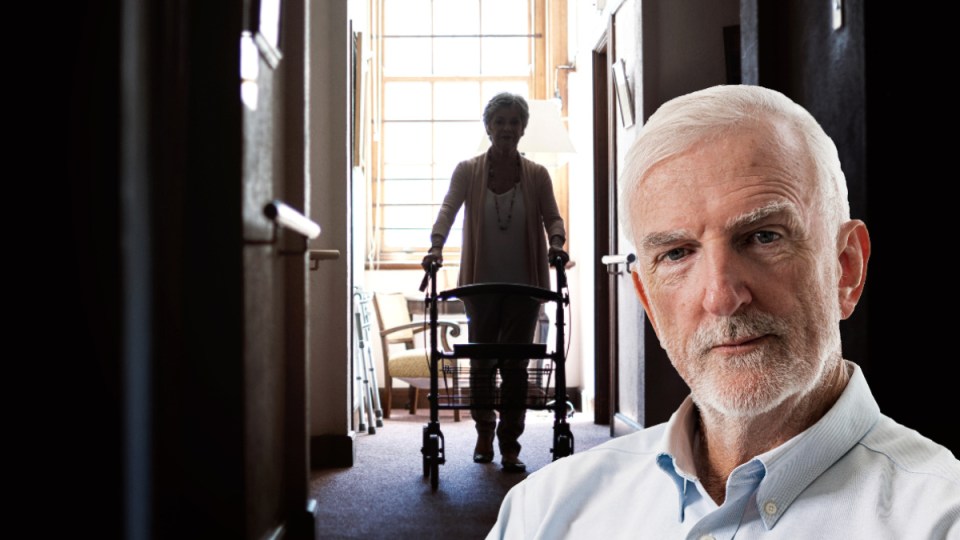 There’s not a physical similarity between Yes, Minister’s Jim Hacker and Richard Colbeck – Hacker seemed more awake – nor chief medical officer Paul Kelly and any of the cast of the ABC’s Hollow Men, but if you’ve watched a bit of television, you’ll feel you’ve seen this show before.

As the spotlight hits the Morrison government’s parsimonious treatment of overworked and underpaid aged-care workers and the senior citizens’ COVID death toll mounts, we’re to have a task force “examine” deaths in residential aged care.

Hot tip: It won’t be reporting before the election.

And neither will the Fair Work Commission reach a decision by then on the application to vary the Aged Care Award 2010 – a process commenced in November 2020.

The relevant union is seeking a 25 per cent pay rise.

That sounds like the sort of percentage that would have conservative commentators frothing at the mouth and had Scott Morrison on Tuesday dissembling about support for healthcare workers with the old “where’s the money coming from” line while offering them retention bonus payments below the inflation rate.

Well, if you didn’t give businesses that didn’t need it somewhere between $20 billion and $40 billion and didn’t run corrupt grants schemes worth billions …

The Morrison government does not want to make a submission to the FWC supporting higher wages for aged-care workers, not even 5 per cent, let alone 25. The (up to) $800 “retention bonus” works out to be less than 2 per cent and, for many workers, barely 1 per cent.

Mr Morrison, Senator Colbeck and Employment Minister Stuart Robert have all been happily hiding behind the line that the FWC process was independent of government.

That’s a canard – a strong submission by the government of the day carries massive weight with the FWC.

The 2021 federal budget “provided enough funding to retain and employ new aged-care workers” according to a spokesman for Senator Colbeck, Minister for Senior Australians and Aged Care Services when aged care was already reeling from staff shortages exacerbated by COVID and closed borders.

That’s obviously false. And then Omicron and “let it rip” made it much, much harder.

The unspoken but obvious thing about aged-care work is that it has been increasingly outsourced to workers imported from low-wage nations.

The Aged Care Royal Commission worked with out-of-date data showing the proportion of overseas-born aged and disability workers increased from 33 per cent in 2011 to 37 per cent in 2016. For new entrants to the sector, it’s 40 per cent. Foreign-born personal care assistants rose from 43.7 to 50.2 per cent in the same period.

What’s more, the composition of the foreign-born workforce has changed, Brits and Kiwis declining “dramatically” and clear growth in workers from South Asia, Africa and the Philippines – low wage countries.

And they do a great work, amazing work – they make it possible for Australians to outsource care of their parents and grandparents.

But now while the borders remain less than open and demand for workers is acute, “can-do capitalism” and faith in the market mechanism is nowhere to be seen.

Left to market forces, aged-care workers would now be paid significantly more – but providers and the government hide behind a regulated wages system and the supply of workers ends up being determined by government via the visas it issues.

At the National Press Club on Wednesday, Reserve Bank governor Philip Lowe was careful not to repeat his 2021 speculation about the role of closed borders in promoting wages growth.

He was attacked by economists at the time for daring to question the orthodoxy that migration doesn’t lower wages, that it lifts them.

He did admit that “the closure of the borders has affected some segments of the labour market” (to state the obvious) but it wasn’t the main game.

All other things being equal, the academic studies show migration grows the economy and, in the real world, migrants tend to be more motivated and entrepreneurial than skippies.

One plus one can equal more than two – I’m personally in favour of a bigger and better Australia – but in artificially constrained sections of the labour market, the lived experience is government conspiring with employers to limit wages growth through use of the visa tap.

Mr Morrison’s miserly “retention bonus” in the face of a supply crisis reeks of a government determined to import cheap labour as soon as possible to solve its problems.

Dr Lowe’s Wednesday speech acknowledged plenty of uncertainty about how the RBA’s longed-for higher wages growth might evolve even with lower unemployment.

If aged-care workers can’t score significant wages growth in the present climate, the outlook will be very uncertain indeed.

Perhaps we need a task force to look into it …

Michael Pascoe: Aged care, COVID, cheap migrant labour and the minister from the BBC circa 1980