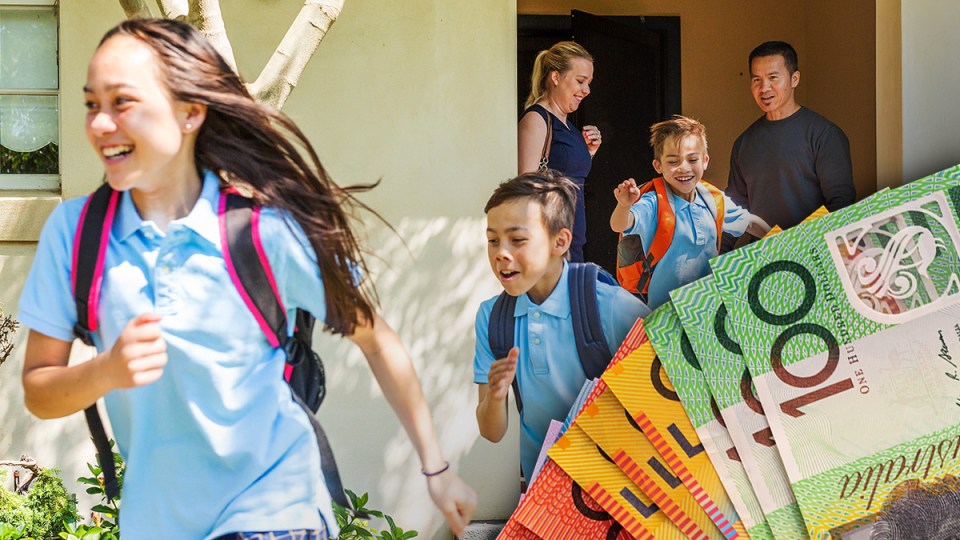 The rise in education costs is seeing parents struggling.

The soaring cost of education is seeing many Australian parents struggle as they plan for their children’s future.

Futurity Investment Group research released on Tuesday shows 39 per cent of government and private schools are likely to increase fees this year.

For Adelaide father-of-two Paul, quickly piling costs are putting the private school plans he had for his children in jeopardy, even as his oldest child begins first grade at a private Catholic school this year.

Paul said the school increased their fees by about $300 last year, and the family is currently paying about $3000 for basic tuition costs.

But their daughter’s uniform cost an extra $800 this year, and the family also needed to buy an iPad for her assignments.

Paul expects to pay around $20,000 per year per child for private school tuition fees when his children reach high school, and an extra $6000 on top for other necessities such as uniforms, devices, and excursions.

But he doesn’t expect his and his wife’s combined income to keep up with the cost of their children’s schooling.

“We have to start saving up because we’re not going to compromise on our kids’ education,” he said.

“We can compromise maybe our travel, maybe eating out, and all those things, which are not that important, but the kids’ education is the most important thing for us.”

“If you’re [not] in a high-bracket income, sending your kid … to any of those big schools is pretty hard, it’s not for a normal person.”

While you might think public schools could be the answer to families getting priced out of private education, the cost of public education is climbing as well.

The average going rate for 13 years of education at a private school in Australia starts at more than $100,000, but Futurity Investment Group data shows government school fees aren’t far behind.

A public school education in Sydney is the most expensive in the country, coming at an average of $92,375 overall.

Although the average wage of an Australian working full-time has reached just under $96,000, Futurity group executive Kate Hill said the cost of public education in cities like Sydney is “quite breathtaking”, and parents’ incomes aren’t going to be able to keep up.

“The cost of education is outstripping any wage growth to parents,” Ms Hill said.

“So it really is becoming more and more of a struggle to find the funds to educate children.”

She said parents asking for “more and more” services is costing schools money, which has led to the cost of education increasing at double the rate of inflation according to Futurity Investment Group’s research.

But keeping students at home is not a get-out-of-jail-free card, as families suffer the consequences of social isolation.

Ms Hill said one of the services schools are spending more money on is mental health support.

For Thornbury-based mother-of-three Jacinta, the need for mental health support was extremely clear from the start of the pandemic in 2020.

She had two children enrolled in a government school at the time, one of whom has since graduated.

Both the children and Jacinta underwent counselling during the pandemic, and her youngest child, who is embarking on year 10 this year, struggled the most with the loss of daily in-person school interactions.

For Jacinta, supporting her family’s mental wellbeing added to the pressure trying to support their education.

The children’s teachers were left struggling to fill the gaps with remote learning, even as the school hired casual relief teachers to check in on students as well.

Jacinta ended up shelling out an extra $90 per week on math tutoring for both of her children, and $30 per week on guitar lessons for her youngest child to help him stay engaged with his learning.

Her family wasn’t alone in facing extra costs for learning from home, as Futurity Investment Group data shows it cost an average of $1856 on top of regular school fees for children to attend school from home in 2021.

While her family was able to pull through the past two years with their education and mental health cared for, Jacinta said she realises not everyone is able to access the same services.

She said the “big equity gap”, which is present even in state-funded education, was highlighted during the pandemic.

“Because I teach … I know that there were families that didn’t have enough devices for the kids at home, they had to share, or they didn’t have good WiFi,” she said.

“I just kept saying to friends and family, ‘What about people that don’t have the things I do? How do they cope with this?'”

When asked to comment on the issue of rising education costs, a spokesperson for the Acting Minister for Education and Youth Stuart Robert said the Federal Government does not set school fees, which are instead set by state and territory governments and the institution for non-government schools.

The spokesperson said $315.2 billion is set to be provided to schools between 2018 and 2029 under the government’s Quality Schools package, with over $24 billion provided in 2022.