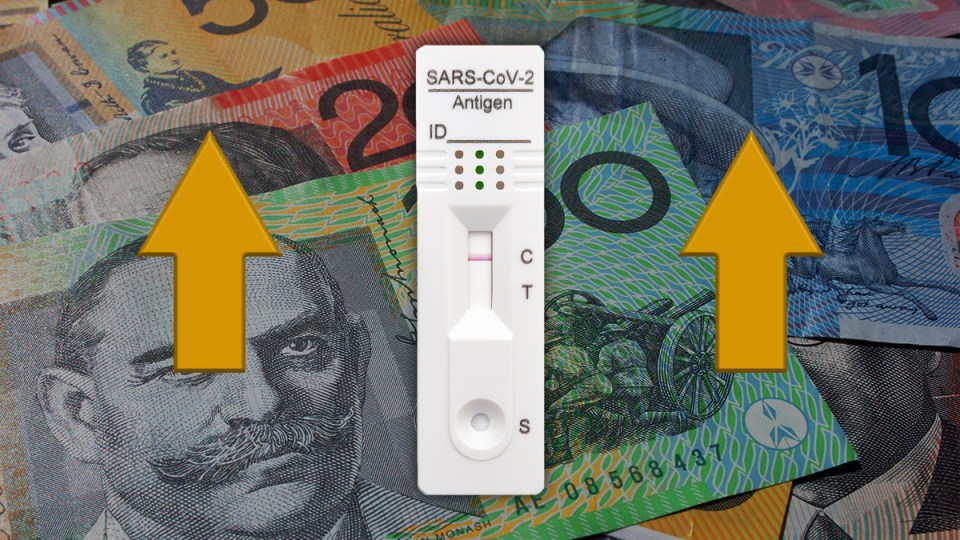 Consumers are being slugged with exorbitant prices for rapid antigen tests. Photo: TND/Getty

Pharmacies, petrol stations and cigarette shops will be named and shamed for ripping off Australians who desperately need to get tested for COVID-19.

The Australian Competition and Consumer Commission (ACCC) says federal police have been given evidence against offenders who are charging up to $70 for a single rapid antigen test (RAT).

New South Wales couple Deborah and Kieran Moore drove for 30 minutes to find a test, only to be ripped off at a service station where multi-packs had illegally been opened and split up for sale at a higher price.

Each test cost them $20 – even though at wholesale a RAT can cost businesses as little as $3.95.

“The funny thing was that on the instructions, it says, ‘Don’t throw away the box’.”

The couple had needed two RATs for a trip to the Gold Coast before Queensland ended its border restrictions, and wanted an extra two for peace of mind as Mr Moore is particularly vulnerable to COVID-19 having had a kidney transplant.

ACCC chairperson Rod Sims said businesses will face “very painful” penalties if caught price gouging, and a mark-up beyond 100 per cent is “hard to justify”.

Mr Sims said although small outlets have been the subject of concerning reports, pharmacies also “have some explaining to do”.

But he said most cases come down to the fact that retailers are being charged inflated wholesale prices for rapid antigen tests by second- or third-hand wholesale distributors.

Mr Foukarre said he had heard some retailers are being charged $25 for single tests wholesale, and are selling them for $30, which he said makes for an “extremely low profit margin”.

“And then it’s seen as price gouging,” he said.

However, the ACCC says its data shows wholesale prices vary between $3.95 and $11.45 per test, depending on the type of test and volumes purchased.

Mr Foukarre said he contacted the Department of Health for clarification on the responsibilities of AACS members, and was told price-gouging restrictions do not apply to retail sales from wholesale supplies.

The Department of Health informed him the restrictions only apply to retail sales by businesses where products were previously purchased in a retail transaction and are then resold (or offered for resale) for more than 120 per cent of the original purchase price.

The ACCC named and shamed King of the Pack and Metro Petroleum stores for having received 70 and 40 price-gouging complaints, respectively.

Specialist tobacco retail franchise group King of the Pack told TND in a statement it “does not in any way condone price gouging and has advised all retailers that it is against company policy”.

It said some stores are trying to make tests more available for communities by going through two or three wholesalers, resulting in a higher cost for customers, rather than waiting for direct sales to become available.

“One of our stores has confirmed the Police Local Area Command visited them and verified their invoices and their allowable sale price to consumers,” King of the Pack said in its statement.

“Unfortunately, there are currently no guidelines for retailers to refer to regarding splitting boxes and selling the tests individually, but once they are in place, we will ensure our stores are informed as soon as possible.

“This practice was originally put in place by local pharmacies all over the country as a means to get more tests out to the public.”