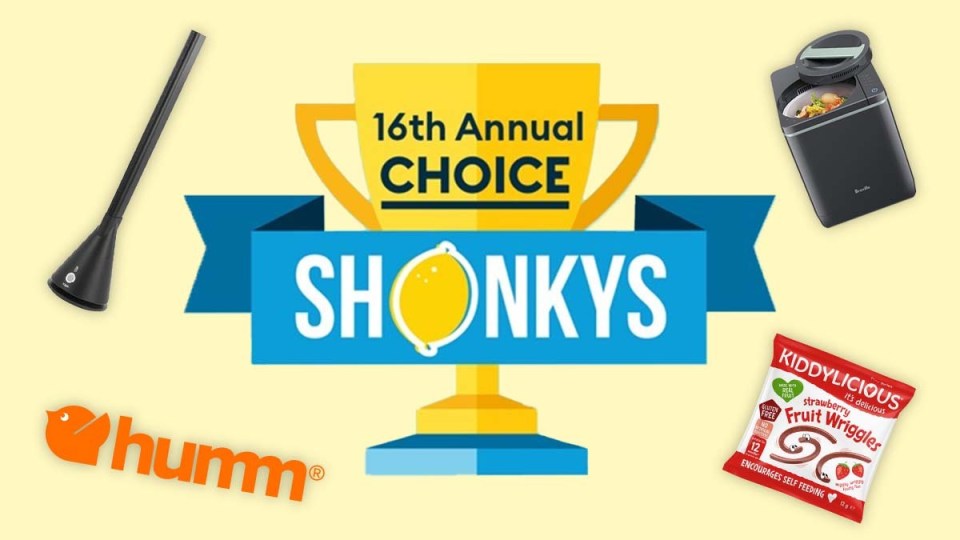 No company is safe as Choice takes aim at ripoffs and dangerous lending. Image: TND/Choice

The awards recognise the worst products and services the consumer advocate has come across in the past year – and this year’s ‘winners’ range from a $499 “compost bin” to a “sugar-laden” children’s snack.

Choice accused Humm of engaging in “unsafe lending” and Breville of selling a pointless appliance that grinds leftovers into food chips to reduce household waste.

Breville says the $499 ‘FoodCycler’ reduces waste by 80 per cent.

But Choice says this claim is meaningless when you take into account the resources that went into manufacturing the device as well as the expensive filters and energy needed to run it.

The other winners are:

A Shonky Award recipient that might come as a shock is buy now, pay later provider Humm.

Humm also received a five-star rating from Canstar, which says the company did well across 84 categories and scored strongly on fees, customer support and spending limits.

However, Choice CEO Alan Kirkland said Humm is lending up to $30,000 without a safe lending check.

“Choice asked Humm four times how they check whether they are lending safely and we could not get a straight answer,” he said.

Choice said Humm evades safe lending laws that require finance providers to verify that a customer can repay a debt before lending them money.

In an interview with Choice, financial counsellor Deb Shroot said Humm “pride themselves” on enabling big purchases such as solar panels or swimming pools.

In a statement to TND, Humm denied that it practices unsafe lending.

The company said it runs a “product suitability” check through third-party credit bureau illion, which provides a score rating the consumer’s suitability for the amount they are wishing to fund a purchase with.

“For [all] purchases over $1000, income verification is mandatory,” Humm said.

Humm said it uses its own credit algorithms to ensure customers have the ability to repay.

Although Mr Kirkland said Choice contacted Humm four times for clarification on Humm’s lending checks, Humm said it had only been contacted twice, and had invited follow-up questions.