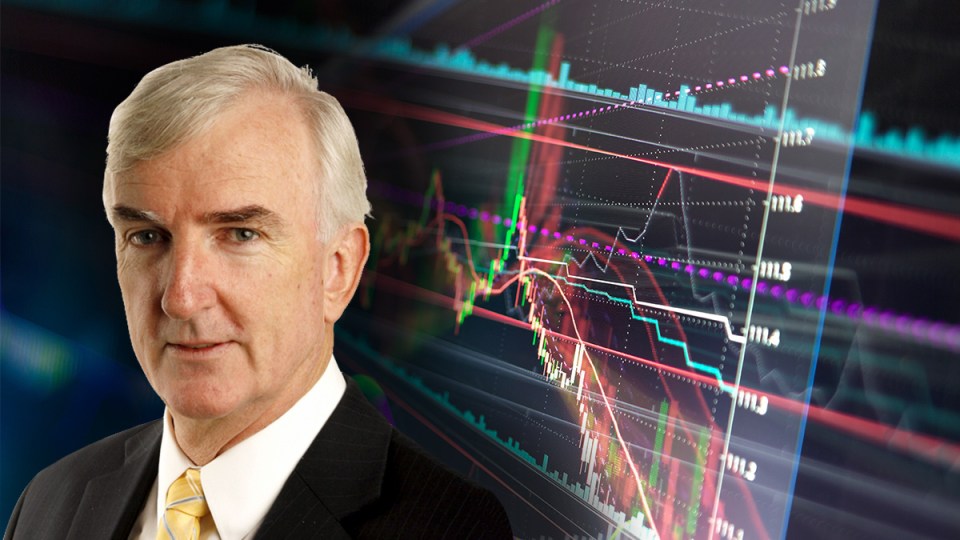 Investment-shy businesses could take us back to stagnation, writes Michael Pascoe. Photo: TND

Money is now free for big business, but that’s still not enough to entice the big end of town to increase investment in Australia.

It’s the $2 trillion question hanging over the Australian economic recovery: Where’s the lift in business investment to sustain the present consumption-driven surge?

There’s no sign of it. It wasn’t there before COVID and it’s certainly not there now.

Despite the collapse in the cost of money, the nation’s boardrooms are clinging to their double-digit hurdle rates, concentrating on cutting costs and squeezing higher dividends out of existing capital, failing to make the investments that eventually increase productivity and lift living standards.

Reserve Bank figures show the average cost of a variable loan for big businesses (defined as having output of more than $50 million a year) was just 1.6 per cent in February. After inflation and tax, 1.6 per cent is effectively free money. 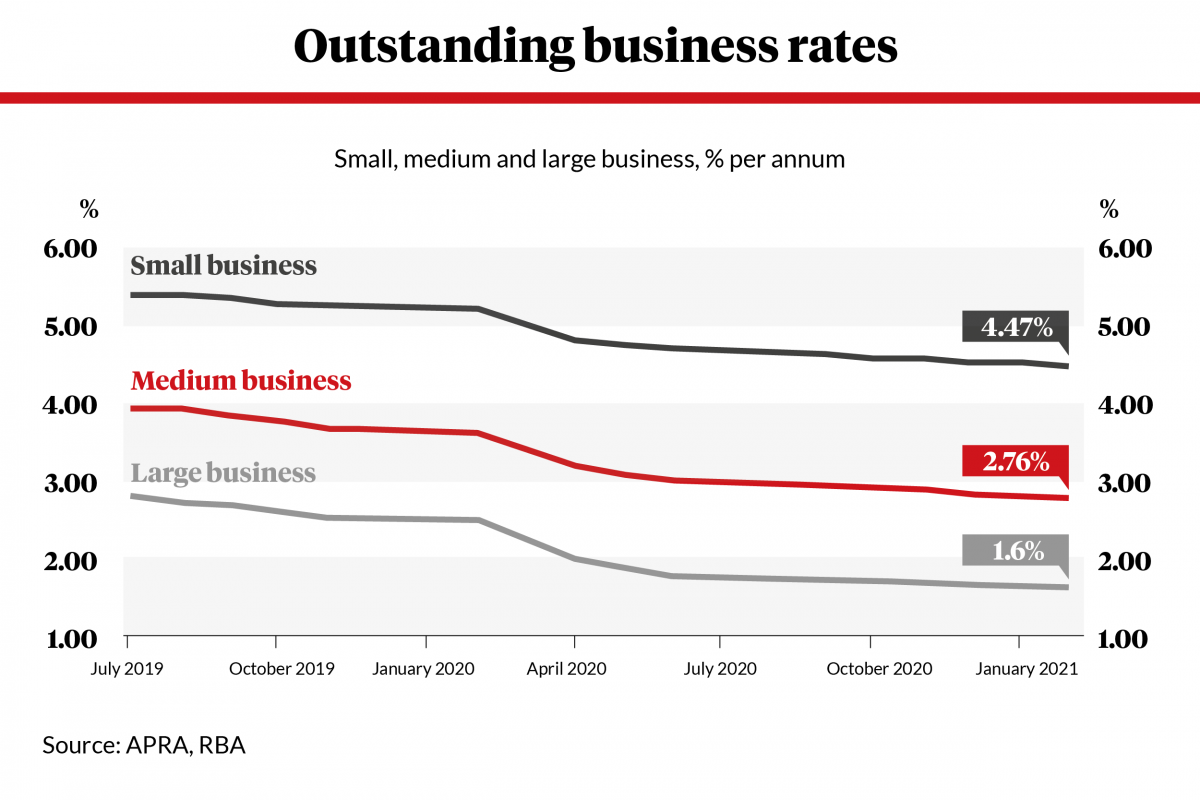 By comparison, money costs medium businesses (annual output between $2 million and $50 million) 2.76 per cent and small businesses (output less than $2 million) 4.47 per cent.

(Even when secured by residential property – therefore almost risk-free for banks – small business pays 4 per cent.)

Small business rates have fallen the least since the RBA started slashing rates in mid-2019 – a fall of 0.93 per cent while the big business rate is down by 1.2 per cent.

Yet it is small business that disproportionately invests in Australia.

A largely overlooked feature of a speech by RBA governor Philip Lowe last month was the highlighting of small business putting its money where our future is. “There is, of course, a lot of variation among small firms, but many of them invest very intensively,” Dr Lowe said.

The missing business investment is up there with the missing wages growth on the governor’s wish list to grow Australia’s $2 trillion economy beyond the present cash splash and free money.

“A durable recovery from the pandemic requires a strong and sustained pick up in business investment,” he said.

“Not only would this provide a needed boost to aggregate demand over the next couple of years, but it would also help build the capital stock that is needed to support future production.

“Stronger investment would also support a more productive workforce and a lift in both nominal and real wages.”

And while many of the nation’s highly-paid CEOs seem to prefer not to take risks and can’t find things to invest in, Dr Lowe had suggestions: “Looking across the economy, there are investment needs and opportunities in areas as diverse as infrastructure, power generation and distribution, health and social services, food production, advanced manufacturing and digitalisation and data science.

“So there is no shortage of areas where additional investment would help our economy grow.”

If management and boards had the talent, foresight, patience and ticker.

The astute reader might notice that many of Dr Lowe’s investment suggestions are prime areas for public investment if the private sector isn’t up for it.

But that would take more active leadership than the government’s stated preference of leaving it to business and hoping.

Independent Australia columnist Alan Austin claims Australia is coming out of this crisis with little of lasting value to show for the mountain of debt. That’s harsh – keeping unemployment relatively low and getting employment up quickly rates as a major achievement.

But if the government sticks with its announced policy of a sharp fiscal contraction without investment, a massive opportunity will be lost and we’ll fall back into 2019’s stagnation.

The Coalition had cut federal infrastructure investment before the virus hit. There is an increase in spending on the way, but it will be next year before it starts to exceed pre-COVID expectations.

Early in the pandemic, the Australia Institute (and many others) made the case for the government to seize the chance to invest in the nation, rather than leave it to business’ slumbering animal spirits to awaken. The government ignored the advice.

Published in February for the December quarter, it showed business capex is going nowhere.

That’s after two years of non-mining investment falling, as shown in another graph from Dr Lowe’s speech. 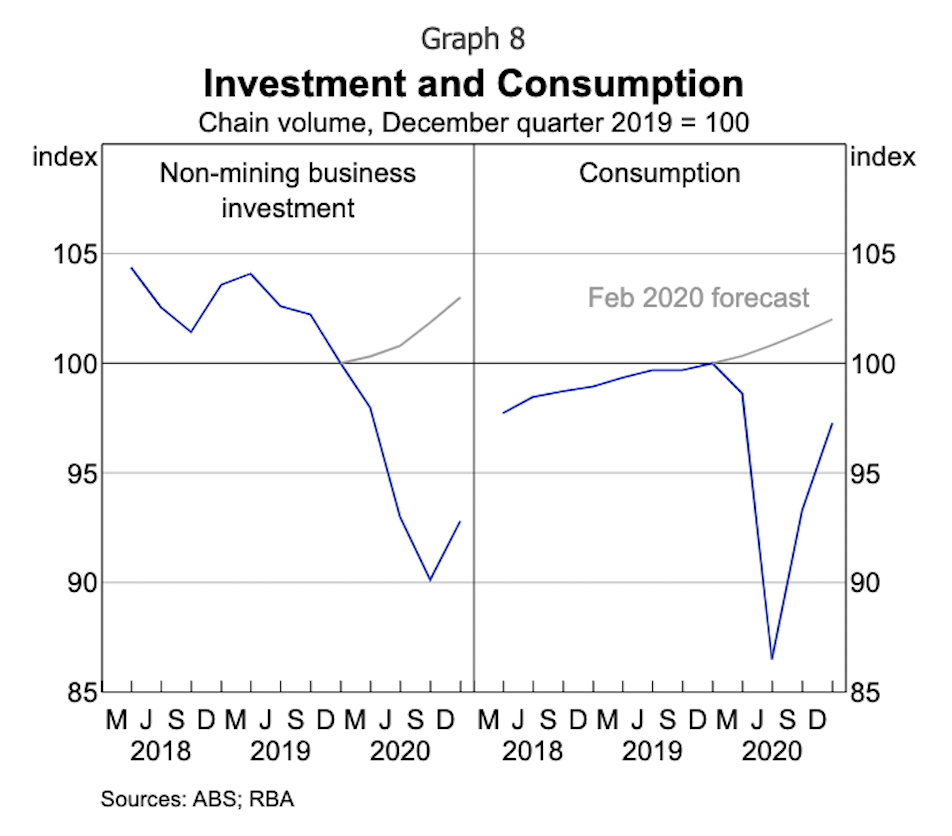 The present consumption lift is boosting business profits without business collectively needing to take the risk of increasing investment, of ploughing those profits back into future growth – perhaps when another crop of CEOs would reap the rewards of that investment.

A paper published six years ago on the failure of “shareholder value” as a guide for executive pay remains highly relevant.

Among other things, it showed privately-owned companies tended to invest much more than publicly-owned corporations – the private companies had a greater stake in the future.

It’s no coincidence that Australia’s small business, mostly representing individuals with a very big investment in the longer term, are prime investors, even when money for them isn’t free.

Michael Pascoe: The $2 trillion question hanging over the economic recovery