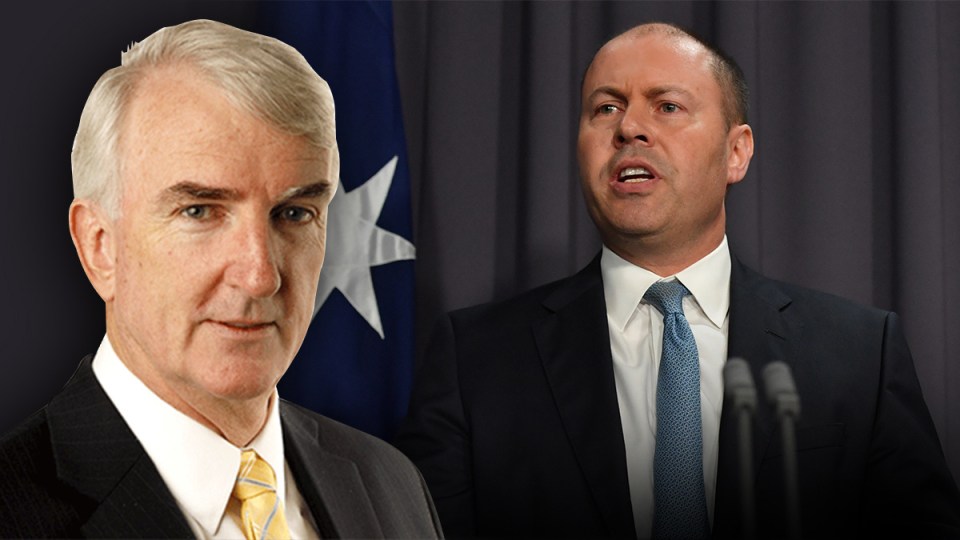 He was at it again in a speech on Tuesday night, laying out an economic path for the country that is starkly at odds with the lived experience of the past decade when it comes to business investment and consumer resilience.

In Josh World, the federal government can rapidly slash its economic stimulus over the next three years and the unleashed animal spirits of the private sector will suddenly surge into action – action that has been missing for the past seven years.

Along with his prescribed radical fiscal contraction, it seems all we need is a dose of solid discipline.

“Fiscal discipline has been a hallmark of Coalition governments and will remain so in the post-pandemic phase,” said the Treasurer, more than slightly echoing his hero, Margaret Thatcher.

And while cracking his fiscal whip, disciplinarian Josh saw fit to wave it over the heads of recalcitrant states:

“The end of JobKeeper will also force state governments to think twice before they implement state border closures.”

So there. The Whipster has spoken.

And then the fantasy economy sets in. The Treasurer rejoiced in “how the private sector is leading the recovery”, citing “dwelling investment, business investment, motor vehicles sales, job advertisements and household consumption are all significantly up”.

Memo Josh: They’re all up on the hundreds of billions of dollars the government and the Reserve Bank have thrown at them. Pull the money out from under them as you’ve promised to do, the pent-up demand and spending some savings by those who could afford to will last for a bit, but then?

As the RBA governor reminded everyone last week, business investment has been sub-par for a decade. If you have a close look at his graph, it appears to have been heading lower from the moment Mr Frydenberg became Treasurer, when he and the Prime Minister kept telling us the economy was “strong”. 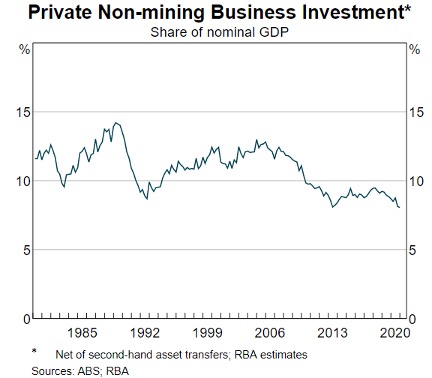 Financial Times columnist Martin Wolfe made a point in a recent column that the pandemic, unlike a war, did not destroy physical capital and the balance sheets of many actually improved, so that there was a good chance economies could recover strongly once fear of the disease had waned.

“If so, the dominant part of the planned fiscal policy response should aim not so much at short-term relief as at “building back better”, by promoting a sustained increase in public and private investment,” he wrote.

No matter how many times the Whipster claims otherwise, he is not doing it.

Federal government investment in infrastructure actually hasn’t been increased much. In real terms, it’s about what Joe Hockey was promising in 2014.

The instant asset write-off has helped sell a bunch of motor vehicles and laptops, but it is not moving sustained business investment expectations.

The dual policies of wages suppression and tax cuts flow to higher profits, not the Josh World fantasy of increased investment and higher wages.

Ah, yes – wages. With wages stagnant, consumer demand can’t sustainably grow once the sugar hit of government money is removed and the forced savings are normalised.

That pesky RBA governor was on about that last month as well with another embarrassing graph. He’s been on about it for years now to no apparent effect. 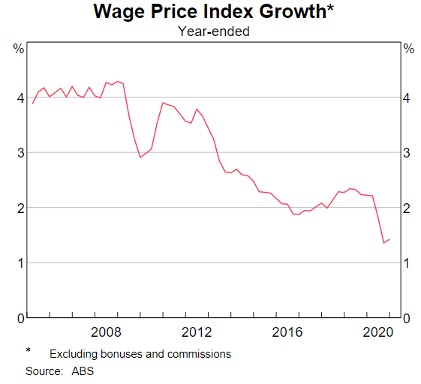 “Even before the pandemic, wages were increasing at a rate that was not consistent with the inflation target being achieved. Then the pandemic resulted in a further step down. This step down means that we are a long way from a world in which wages growth is running at 3 per cent plus.”

In the real world, wages suppression is a brake on the economy and retard investment, as has been reported in this space via ANU Fellow and former top public servant Dr Michael Keating.

While the Treasurer was practising whip cracking on Tuesday morning, the Pearls and Irritations website published a very fine summary by Dr Keating of the Morrison government’s policy challenges and failures.

In part, he wrote: “In the six years since the Coalition Government was elected, prior to the recession, the economy was stagnating. And as the Governor of the Reserve Bank pointed out back in 2017, the critical reason for this has been low wage growth.  But the Morrison government has no plan to address this problem, and instead its reforms to industrial relations and its opposition to wage increases, means that low wage growth and economic stagnation are likely to continue.”

Oh well, such is Josh World. But we’ll have discipline.