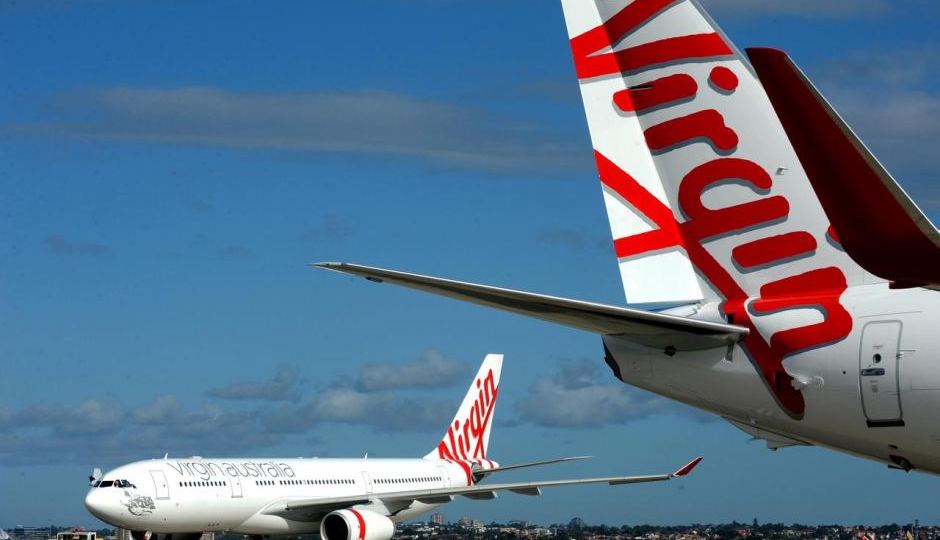 Grounded planes have contributed to a massive reduction in emissions. Photo: AAP

Virgin Australia captain George Kailis has been flying planes for almost 20 years, but fears for himself and his co-workers as the company looks likely to enter into voluntary administration.

The Morrison government has continued to hold back support for the airline, and despite NSW and Queensland’s governments arguing about where the company should be headquartered, private equity firms are circling.

They are waiting for cash-starved Virgin Australia to enter into voluntary administration, which sources say could happen as soon as Tuesday.

This is a process where an insolvent company is placed in the hands of an independent person who can assess the best path forward for its business owner and creditors.

Virgin Australia’s board met on Monday night and appointed Deloitte as its administrator.

Mr Kailis recalls when Ansett collapsed in 2001, it took years for another airline to get up and running.

“When Ansett collapsed, Virgin was already there with nine aircraft and crew,” said Mr Kailis, who is also the vice-president of the Australian Federation of Air Pilots.

“There were plenty of aircraft around because it was [post] September 11.

“Virgin had new aircraft arriving and sitting on the tarmac because they could not train pilots quick enough.”

About 8000 of 10,000 workers at Virgin Australia have been temporarily stood down as it grounded most of its planes due to coronavirus.

“We have about 1400 pilots left in the Virgin Group and the vast majority of those have been stood down without pay,” Mr Kailis told ABC News.

Despite all indications a $1.4 billion federal government bailout is unlikely, Mr Kailis is still hoping authorities will step in with a last-minute lifeline.

“That would give an already damaged economy the ability to recover in a quicker manner, which not only would preserve pilot jobs in Australia, it would also preserve [the jobs of] hundreds of thousands of hospitality and tourism workers and any other industries that are reliant on domestic airlines.”

He said the government’s argument to leave the free market to sort itself out did not cut it in the midst of the biggest-ever upheaval to the global airlines industry.

Airlines all around the world are doing it tough, with International Air Transport Association (IATA) figures estimating the COVID-19 crisis will see airline passenger revenues drop by $US314 billion in 2020.

Virgin has $5 billion of debt that no one – including its foreign shareholders – wants to touch.

Singapore Prime Minister Lee Hsien Loong had previously suggested his country’s airline was not in a position to assist Virgin, given Singapore Airlines has had to reorganise its finances to survive the crisis.

And despite calls for billionaire founder Richard Branson to personally stump up cash, he has remained silent.

As Virgin remains in a trading suspension, major ratings agencies Moody’s and Fitch have further downgraded the company’s credit rating.

“Moody’s base case assumption is that any outcome is likely to result in an economic loss to creditors relative to the value of the debt obligation’s original promise,” it said upon announcing the downgrade on Monday.

It said Virgin had about $900 million of unrestricted cash on its balance sheet in mid-March and “minimal availability under its credit facilities”.

“While the airline has no new aircraft deliveries until July 2021, and no significant debt maturities until October 2021, significantly lower bookings as it cuts capacity will lead to material cash burn in the short term,” Moody’s said.

Fitch Ratings on Friday also downgraded Virgin Australia, citing “increasing uncertainty around whether the airline will be able to obtain additional financing”.

It said the airline would run out of cash over the next six months without fresh third-party support.

“While Fitch believes that the company continues to work on financial assistance, we believe that travel curbs to contain the COVID-19 pandemic are increasingly straining its liquidity such that default is a real possibility,” it said.

“VAH’s working capital is increasingly being affected by cancellations, minimal bookings and outflows at its loyalty program as members redeem points for non-flight benefits.

“The airline has now grounded most of its fleet to minimise cash outflows, but it is seeking options to shore up its liquidity.”

Virgin Australia is not alone in asking the government for a bailout.

Last week, the Trump administration announced a $US25 billion package for its airlines, which US Treasury Secretary Steven Mnuchin said would help support American workers and preserve the airline industry.

Jonathan Rochford, a funds manager at Narrow Road Capital, told ABC News Virgin Australia had been poorly managed for years, and he thought insolvency would be the best option.

“Virgin has a myriad of problems and a government bailout without insolvency will get in the way of fixing these problems,” he said.

Mr Rochford argues Virgin has consistently struggled to attract the high-paying customers to be a strong competitor to Qantas.

“The company has pursued growth over profits, adding marginal routes that weighed down the good business it had servicing the capital city routes,” Mr Rochford said.

“This failed strategy has left the airline overloaded with aircraft.

He said a government bailout, if put in place without insolvency, would “delay and obstruct the necessary restructuring and increase the risk that Virgin ultimately ends up like Ansett”.

He also pointed out that about 75 per cent of the debt is believed to be owed to foreign lenders.

“A bailout of Virgin without an insolvency is likely to result in hundreds of millions of dollars being transferred from Australian taxpayers to foreign lenders,” Mr Rochford said.

A revamped Virgin Australia would be better off concentrating on profitable critical domestic routes, employing less staff and reducing its fleet, he said.

In such a scenario, Virgin Australia’s loss-making low-cost offshoot Tigerair Australia would disappear and new owners would step in.

“I don’t want to comment about previous executives or current executives and the way things have been run,” Mr Kailis said.

“Yet understanding the government’s primary role is to protect Australian citizens, [this] is not Virgin’s or any other airline’s fault.

“This event [the coronavirus crisis] has seen the [company’s] revenue reduced to almost zero. That’s not their doing.

“Other airlines that were even in profitable positions around the world – including in the United States – are getting support from their government.”

“The airline has two decades of providing decent jobs, a safe working environment and excellent service for the travelling public,” he said.

“It is a viable and much-needed business and without it Australia will struggle to get its economy back on track once the crisis abates.”

He said the federal government could still step in and back Virgin, while taking an equity stake in the business.