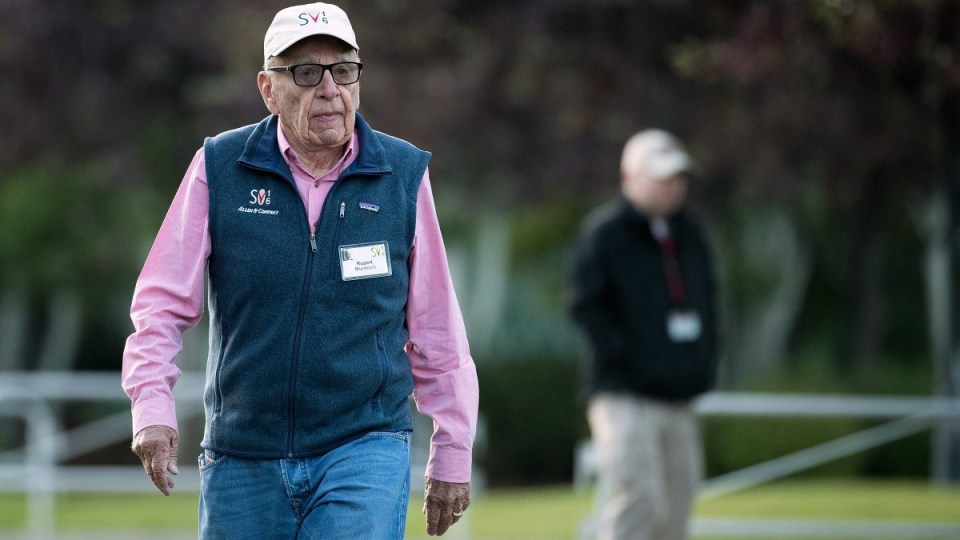 The Disney deal sees the 86-year-old Murdoch return to his news roots. Getty

When Rupert Murdoch is not publishing news he’s making it. His decision to sell 21st Century Fox’s film and television assets to Disney for $US52.4 billion ($68 billion) in stock has made headlines around the world – as Murdoch deals always do.

Mr Murdoch is better known for buying than selling, so the question on everyone’s lips is: Why?

For good or ill, Mr Murdoch’s name has been synonymous with the media, in all its incarnations, for more than 65 years. He has arguably been responsible for more of those incarnations than any other media figure.

But while the Sun King has been undeniably ruthless as a dealmaker, employer and political influencer, there is also a sentimental side to the 86-year-old billionaire.

Even so, one should not overdo the violins when reflecting on Mr Murdoch’s sentimentality. It should not be forgotten that he infamously renounced his Australian citizenship in 1985 to become a US citizen in order to acquire Metromedia, the US’s largest group of independent television stations.

But when the old warhorse breathes his last, nothing would please him more than to be remembered simply as a newsman.

However, the deal will not include the Fox broadcasting network and stations, Fox News, Fox Business cable news network, US sports network Big Ten Network, the Fox Sports 1 cable sports channel, and a 28-station television broadcasting business. These assets will be spun off as a newly listed Murdoch company.

As well as a frenetic deal-maker, Murdoch is also a builder; and he is mindful of the legacy he leaves behind. Selling 21st Century Fox but retaining the Fox News assets is as much a decision about legacy as it is a business decision.

The biggest deal of Mr Murdoch’s career ensures that his beloved Fox will remain in the family after his death.

Mr Murdoch has always played by his own rules, so he is not particularly fussed that his legacy will not necessarily be remembered with fondness.

He believes the legacy that counts is the colossus he has built from the single newspaper he inherited from his father Sir Keith Murdoch in 1952, Adelaide’s The News.

There is of course some hard business reckoning in the decision to sell to Disney – including the benefits of a smaller empire more easily controlled by the Murdoch family in a volatile media market. Mr Murdoch was no less vulnerable in the age of the digital disruptors.

Not surprisingly, he baulks at suggestions of a retreat.

“I know a lot of you are wondering, ‘Why are the Murdochs making such a momentous decision?’ Are we retreating? Absolutely not,” Mr Murdoch said on a conference call with analysts.

“Those who know me know I am a newsman with a competitive spirit. Fox News is probably the strongest brand in all of television. We are pivoting at a pivotal moment.”

As well as acquiring an eclectic group of newspapers across the globe – from the (now defunct) News of the World and The Sun in the UK to The Times (of London) and the Wall Street Journal – Mr Murdoch has also been a media trailblazer.

In 1990 he formed digital subscription television channel, BSkyB (now Sky), and in the 1990s was among the first to recognise broadcasting opportunities in the rapidly developing economies of Asia.

Crucially, he recognised that the worlds of media and entertainment were becoming increasingly intertwined – a trend he both identified and nourished, most notably through his Fox News network. This was a trend which arguably experienced its apotheosis with the election of reality-TV star Donald Trump as President of the United States.

By selling the bulk of his entertainment assets to Disney, Mr Murdoch has seen the future of the media industry – and this time he does not see himself having a role in that future.

In a television interview he described the move as “returning to our roots, which is news and sport”. The decision also reflected “the changing way people watch television these days”.

The Disney deal – if regulatory approvals go ahead – represents just the beginning of the recalibrated Murdoch empire, eventually to be handed over to the next generation of Murdochs.

The structure of the “new Fox” has yet to be revealed, with the role of scions Lachlan and James also unclear. It is difficult to conceive that this would be a detail that has escaped the attention of the patriarch. And if Rupert has an exit strategy, he is keeping that to himself.

In the meantime, Mr Murdoch has ensured that his first love, news, will be enshrined in the latest iteration of his media empire.

As to the legacy of the world’s most powerful newsman: that, as they say, is another story.

Rupert Murdoch hopes the Disney deal will seal his legacy