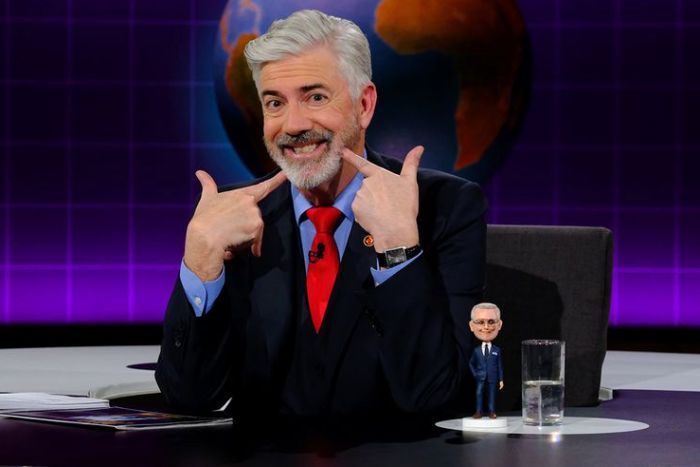 Shaun Micallef says the upcoming season of Mad as Hell will be his last. Photo: ABC

Comedian Shaun Micallef has confirmed the days are numbered for his hit TV show Mad as Hell – at least, with him as host.

Whispers of the show’s demise emerged last week, ahead of its return to the ABC on July 20.

On Monday, an ABC spokesperson confirmed on Monday that Micallef had decided to leave.

“After 10 years and 15 seasons, Shaun Micallef has decided to take some time away from Mad As Hell at the end of the upcoming season,” the ABC statement said.

“The ABC and Shaun maintain a great working relationship and we look forward to continuing to work together. Shaun will be back with the new season of Mad As Hell, which starts on Wednesday, 20 July, and will also appear on the ABC as part of other projects next year.”

Micallef had addressed the rumours a day earlier, confirming the show’s 15th season would be his last in the host’s chair.

“It is true we’ll not be returning next year, but this is entirely down to me,” he wrote on Twitter on Sunday.

“After 11 years and 15 seasons, I just felt it was time for someone younger to take advantage of the resources and opportunities on offer. I’m turning 60 in a week for f—’s sake.”

Mad as Hell returns the same night that Micallef premieres a new series, Shaun Micallef’s Brain Eisteddfod, on Network 10 – although he denied having jumped ship to a commercial network.

“I enjoy a great working relationship with the ABC and have done for many years. Sometimes I make shows for other stations, that’s all. The ABC is cool with this,” he wrote.

He also confirmed “the ABC and I are continuing to talk about evolving [Mad as Hell] with someone else in the chair”, or making different shows with its cast.

“In the meantime, do enjoy this last season of the original version of Mad as Hell. We’re going to do all things we’ve NEVER been allowed to. Bloody ABC,” he wrote.

One of the cast, actor Tosh Greenslade, said he was “heartbroken and anxious” about the decision to end Mad as Hell.

“I’ve been very lucky to work with my heroes for the past decade, but interest in employing me outside the show has been limited at best, so chances are high that come September I won’t be an actor anymore. Some miracle might happen before then, but I have a family to look out for,” he said.

“I’m heartbroken and anxious about the future, but in the world we live in, who isn’t? Not giving up just yet, I’ve still got three months to try to make something happen, but if they play out like the last 10 years I’ll still be eternally grateful that I got to live my dreams.”

Co-star Christie Whelan said the cast would “rock out the final season”.

Shaun Micallef confirms he will quit as Mad as Hell host