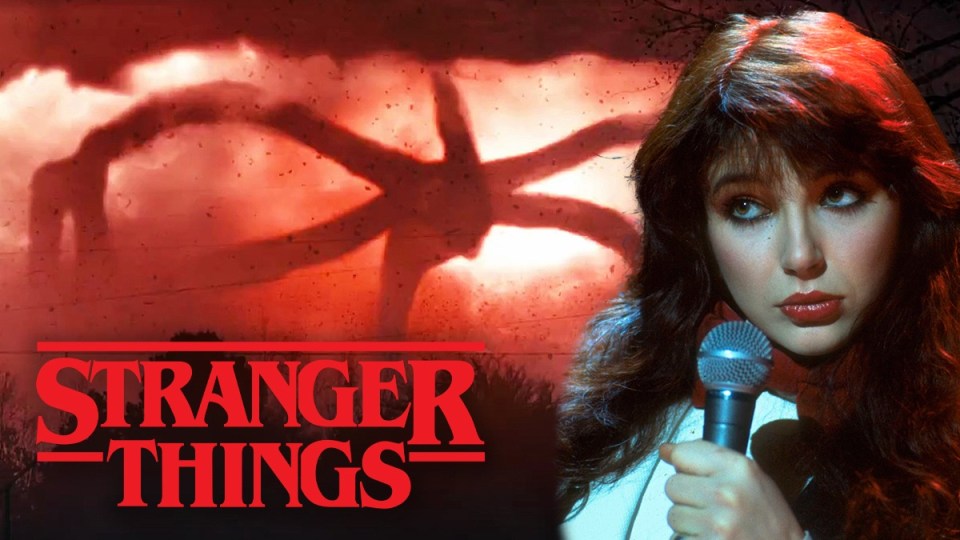 A whole new generation of listeners are falling in love with Kate Bush thanks to Stranger Things. Photo: Netflix, Getty, TND

The breakout star of the long-awaited fourth season of Stranger Things isn’t a who, but a what – the 1980s track Running Up That Hill (A Deal With God) by Kate Bush.

After featuring prominently in the latest instalment of the Netflix hit as the favourite song of character Max Mayfield (Sadie Sink), the timeless track has again planted itself firmly in our heads.

As well as going viral on social media, the 1985 song is climbing back up the charts, reach No.4 on Apple Music’s Top 100: Global chart as of Thursday, while Spotify listeners have pushed it to the No.2 spot.

Running Up That Hill, released as part of the English singer-songwriter’s much-loved fifth album, Hounds of Love, peaked at No.3 on the UK singles chart when it was originally released.

But in the age of streaming and social media, it’s a different story. Such is the power of the young, passionate fans of Stranger Things.

Stranger Things, set in 1980s America, has always made the most of the decade’s culture.

From the rise of Dungeons & Dragons to a shopping spree montage set to Madonna’s Material Girl, the show is filled to the brim with nostalgia.

But Running Up That Hill wasn’t merely an ’80s reference to tickle the nostalgia cogs of older viewers.

Without delving too deeply into spoiler territory, the song was a crucial part of the intense fourth episode of the season, entitled Dear Billy.

The inclusion of the song, Sink’s acting and the scene in question struck a chord with viewers.

Now a whole new generation of listeners is falling in love with Bush’s unique sound.

On YouTube, the comments section of the official music video is full of Stranger Things fans.

It isn’t just new listeners appreciating the song either. Thanks to Dear Billy, older viewers of the show have been able to rediscover the song.

“I remember this song [from] when I was a kid back in the ’80s,” one listener commented on YouTube.

“Listening to it again in the 4th epic episode of ST, was like a punch in the stomach that brought me back to my childhood and it is just perfect for that scene. I can’t stop rewatching episode 4.”

For the most part, fans of the ’80s idol have welcomed new listeners to the community.

Bush has yet to respond to her hit song re-entering the charts.

Even so, the comments section is full of recent messages from fans of the 63-year-old.

Bush made her stage comeback in 2014, performing at her first live concert in 35 years. Since then, she has released remastered versions of her album catalogue on vinyl and CD.

She also sporadically shares updates with her followers via her official website, the last being a Christmas message from 2021.

If you thought waiting three years for a new season of Stranger Things would put viewers off, think again.

Season 4, Volume 1, which launched on May 27, pulled the biggest premiere weekend ever for a Netflix original series, with a whopping 286.79 million hours viewed.

It knocked Bridgerton season 2 out of the top spot, which clocked 193 million hours.

But the numbers don’t stop there.

According to Deadline, this is the first season of Stranger Things to reach No.1 in 83 countries, setting another premiere weekend record.

In all 93 countries Netflix is tracking, Stranger Things has entered the Top 10 trending list.

Season 4, Volume 1 takes place nine months after the events of Season 3, and finds the close-knit group of friends separated for their own safety as a new threat reveals itself.

The supernatural fun will continue in Season 4, Volume 2, which premieres on July 1 on Netflix.

Duchess of Sussex Meghan Markle slams US abortion ruling
Melania Trump: Bombshell revelations about what she did during US Capitol riot
Retailer pauses facial recognition tech trial after privacy complaint
Donald Trump grabbed at steering wheel in bid to get to Capitol riot
Two charged over US migrant truck deaths
Hundreds of hives destroyed in bee mite eradication effort
Will you accept this break? The Bachelorette Australia will not run in 2022
Today's Stories