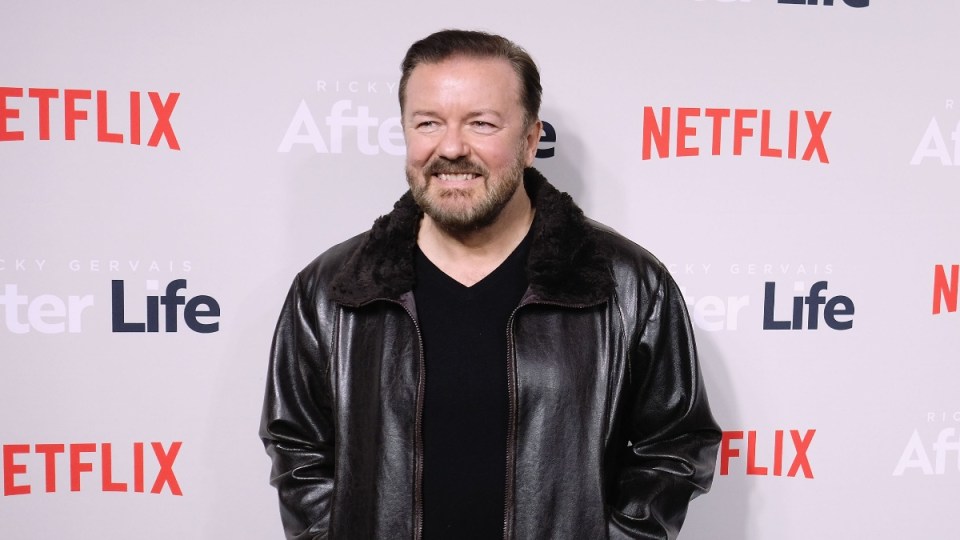 Despite mocking the trans community, Ricky Gervais said he supports them in "real life". Photo: Getty

Comedian Ricky Gervais is facing a public backlash for mocking trans women in his new stand-up special on Netflix.

SuperNature debuted on the streaming service on Tuesday, less than a year after Netflix employees staged a walkout over a comedy special by Dave Chappelle they described as transphobic.

A few minutes in

Within the first few minutes of his set, Gervais took aim at the trans community.

Gervais then proceeded to recount a scenario in which two people argue over the suitability of trans women using female toilets, before mentioning the issue of rape.

Soon afterwards, he spoke about the time fellow comedian Kevin Hart stepped down from hosting the Academy Awards in 2018 after several of his old tweets, containing homophobic slurs, resurfaced.

“You can’t predict what will be offensive in the future,” Gervais said.

“You don’t know who the dominant mob will be. Like, the worst thing you can say today is, ‘Women don’t have penises’, right?

“Now, no one saw that coming. You won’t find a 10-year-old tweet of someone saying, ‘Women don’t have penises’. You know why? We didn’t think we f—ing had to!”

“Not enough to apologise and move on.”

CK, who admitted that sexual misconduct allegations made against him in 2017 were true, won a Grammy at this year’s award show.

Towards the end of his special, Gervais spoke of his “real-life” support for the trans community.

“Full disclosure: In real life of course I support trans rights. I support all human rights, and trans rights are human rights. Live your best life. Use your preferred pronouns. Be the gender that you feel that you are,” he said.

“But meet me halfway, ladies: Lose the c–k. That’s all I’m saying.”

Supporters of Gervais celebrated him online as an “equal-opportunity offender,” while his critics questioned why comedians think it is OK to “take some of the most vulnerable, marginalised people in society … and tear them apart to hundreds of millions on Netflix”.

In it, he spoke of his support for Harry Potter author JK Rowling, who has been widely condemned for her comments about the trans community.

He also declared himself “Team TERF”.

Despite protests from within and around the world, Netflix stood by the comedian and its stance on artistic expression.

On its current online jobs board, in a description of its culture, Netflix said: “Not everyone will like – or agree with – everything on our service.”

Although every title is different, Netflix said it approaches them based on the same set of principles.

“We support the artistic expression of the creators we choose to work with; we program for a diversity of audiences and tastes; and we let viewers decide what’s appropriate for them, versus having Netflix censor specific artists or voices.”