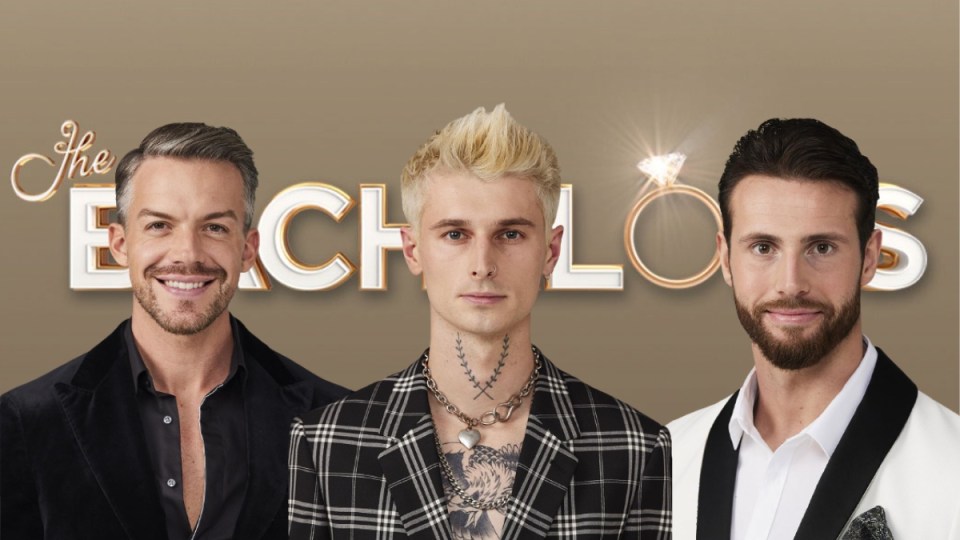 With three leading men comes the potential drama of competing over the same woman. And that could equal higher ratings. Photo: Ten, TND

In a world first, The Bachelor Australia will premiere with not one, not two, but three leading men for its 10th season.

Host Osher Günsberg revealed the bachelors on The Project on Monday night, pitching the new season as “electrifying”.

“No one in the world has ever had three bachelors and so, therefore, the way it works, the way everyone gets to know each other is very different this year,” Günsberg teased.

“It’s already been fascinating. We’ve been going [filming] for a little while now and it is already just electrifying what we’re seeing.”

For The Bachelor‘s ratings, you’d hope so.

Overnight TV ratings for The Bachelor Australia have steadily declined over the past couple of years.

It’s a far cry from The Bachelor’s glory days, when finale numbers would easily surpass one million.

At its peak in 2015, Sam Wood’s finale drew a whopping 1.482 million metro viewers. It remains the highest Bachelor Australia finale to date.

So, why the decline?

One could argue the rise of streaming giants has had a massive effect on free-to-air channels. Plus, a large number of viewers watch the series on the network’s catch-up TV platform, 10 Play.

One could also argue The Bachelor format has become tired and predictable. And viewers have repeatedly called out the show’s lack of diversity.

The apparent solution? To cast three bachelors in one season.

“I think they’re gambling on us being so confused and so curious about how this is going to work that we have to tune in to find out exactly what this means,” musician and podcaster Xavier Rubetzki Noonan told TND.

“It’ll be interesting to tune in, but it is obviously quite disappointing that it is just three white dudes.”

This isn’t the first time The Bachelor has added more than one main lead.

The Bachelorette Australia switched things up in 2020, casting sisters Elly and Becky Miles as dual leads in the hopes it would lure viewers.

“There was a huge obstacle with that season, which they thought would be an advantage. And it really wasn’t,” Mx Rubetzki Noonan said.

“They were sisters. And in doing that, I think they [the show’s producers] sidestepped having a mixed dating pool. As far as that season went, it was an episode or two of working out who was dating which people and that was it. There wasn’t a lot of mixing.”

Mx Rubetzki Noonan is one half of the Bachelor of Hearts podcast, co-hosted by triple j’s Max Quinn.

Together, they recap and discuss past and present seasons of the international franchise.

For this season to work, one would assume producers are banking on the potential drama of having three different men competing over the same contestant.

Sisters might not want to fight over the same love interest, but three strangers easily could.

“Either it’s that, or it’s a repeat of that [Elly and Becky’s] season that no one particularly liked. It feels like it would be a real wasted opportunity if that were the case,” Mx Rubetzki Noonan said.

Similarly, Quinn believes The Bachelor‘s most recent and upcoming seasons have pulled inspiration from its competitors like Married At First Sight.

“If you look at the successful reality TV shows at the moment, Married At First Sight is a great example – but also things like Love Island, where there are this collection of suitors and they’ll pair off and there’s drama and conflict when oops, they like the same person,” Quinn said.

He thinks the new season might stoke the flames of infighting between the contestants and bachelors, which he described as a “staple of reality TV”.

The Bachelor franchise has flirted with this type of conflict before, mirroring the MAFS dinner party – where the entire cast is involved and often asks each other spicy questions – in the form of the Bula Banquet in Bachelor in Paradise.

That said, Quinn believes the best seasons of The Bachelor stem from its compelling storytelling. And to have that, you need a great cast and you need to feel invested in both the bachelor or bachelorette and the contestants.

“So I am feeling that they are going to be stretched for time, trying to get us to invest in any of these men, no matter how interesting or well-cast they may be,” Quinn said.

‘Reality should be real’

Latin American-Australian Juliette Herrera, who starred on Gilbert’s season of The Bachelor in 2020, told TND that she was disappointed the series had bounced back to casting white Australians as the leads after diverse seasons in 2021.

“It’s just perpetuating the idea that white men are all we want to see on TV and that’s the love story we want to follow. It’s not reflecting real society,” she said.

“We are in a society where so many people are in interracial relationships. They exist.”

“Show all versions of the contestants, not the edited version. Not ‘the perfect girl next door’, or the ‘sexual crazed one’, or the ‘feisty one’. They have all these archetypes that we’re tired of seeing.”

Ms Herrera pointed to older seasons of The Bachelor, where viewers could connect with multiple contestants across the season.

“You saw more of them because they all had more screen time. Now, they’re just homing in on the runner-up, the potential winner, the two drama girls and that’s it.

“Why should you invest in a show when you’re not seeing their true selves?”

Ms Herrera is optimistic about the new season, however. Perhaps by having three men on the show, we might see more than just the typical ‘princely’ type of bachelor.

Maybe one man is more serious, while the other is fun.

“I think it will create interest, but we’ll see.”

The Bachelor Australia is coming soon to 10 and 10 play