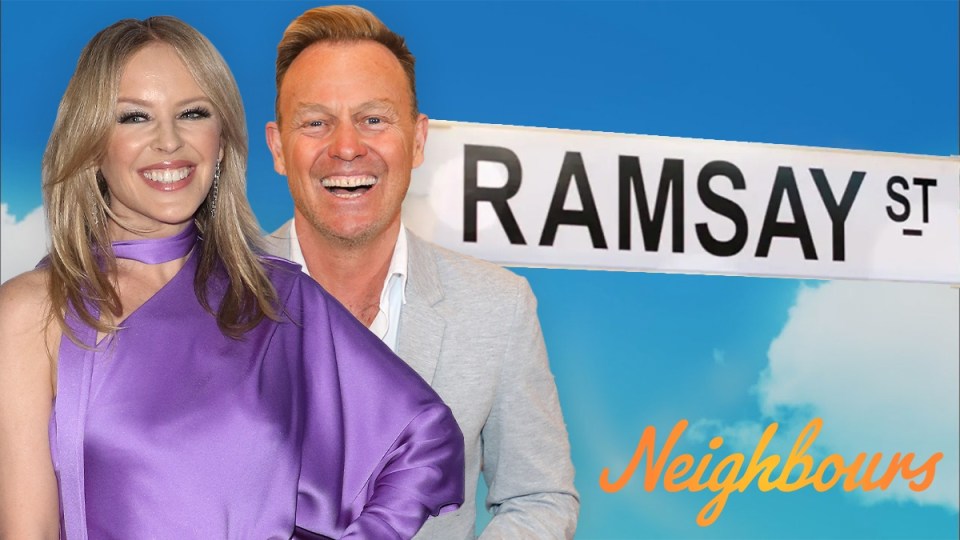 The iconic Australian TV series will come to an end in August after 37 years. Photo: Getty, KISS 101.1, TND

They were one of television’s most beloved couples, and now Scott Robinson and Charlene Mitchell – played by Jason Donovan and Kylie Minogue – will return to Ramsay Street for the Neighbours finale.

The Australian television staple will cease production in June after 37 years, due to the loss of its key broadcast partner in the UK.

Donovan and Minogue will reprise their roles as the popular characters in the fictional Melbourne suburb of Erinsborough.

“It would not feel right to end the show without them.

“We are thrilled that Jason and Kylie have come home to play a very special part in our series finale. It has been an emotional experience for them, for us and I’m sure it will be for our viewers.”

One of Australian television’s biggest moments

Two million Australians and almost 20 million viewers in Britain tuned into Episode 523 of Neighbours to watch Scott and Charlene tie the knot in 1987.

It is undoubtedly one of the most iconic scenes in Australian television history, so much so that it has earned a place in the National Film and Sound Archive of Australia.

Upon announcing their return on Instagram, the stars posted close-up images of a Neighbours’ script with their characters’ names.

The fan reaction has been strong, to say the least.

Melbourne TV writer Vaya Pashos, co-host of the Neighbuzz recap podcast, said the return of Scott and Charlene is “exactly as it should be”.

“There’s a lot of fans who think they shouldn’t come back, that their time is done, that the current cast should be the ones who shine. But I think the more the merrier, and I think it makes perfect sense,” Ms Pashos told TND.

“They did so much for the show. They brought so much attention to it. People fell in love with their love story and it just makes sense.”

Minogue eventually left Neighbours to launch her international career as a singer-songwriter.

Her No.1 debut single Locomotion was released less than a month after the wedding episode aired.

That was just the beginning for the singer, who is now the highest-selling female Australian artist of all time.

Donovan also kicked off a career in music after leaving Neighbours, releasing five studio albums including his best-selling Ten Good Reasons in 1989.

He is slated to perform at a global online concert in June.

More fan-favourite returns for the finale are expected.

Alan Fletcher, who has played Dr Karl Kennedy for a whopping 28 years, teased many returns during an interview on the British chat show This Morning.

“I do know that it has been announced the wonderful Harold Bishop will return to Ramsay Street towards the end of the show … Someone from Karl’s sordid past is definitely coming back and there are many, many other names in the pot,” Fletcher said.

“I can assure you that the producers are working very, very hard to try and entice some of the most-loved characters from Neighbours to at least make some appearances.”

Harold (Ian Smith) has appeared on and off on Neighbours since 1987, featuring in a slew of very dramatic storylines such as the time he was swept out to sea during a coastal holiday.

As for the finale’s storyline, Ms Pashos hopes to see plenty from the Kennedy family.

“Karl and Susan Kennedy – their children live interstate and internationally, so I can only imagine they’d be reunited with some of their adult kids and their grandkids,” she said.

Ms Pashos hopes several storylines and threads will be wrapped up nicely before the finale, so the show’s final episode can focus on saying goodbye to its legions of loyal fans.

From June 13, Network 10 will air double episodes to celebrate the final season of Neighbours.

The ultimate series finale will air on August 1.

Neighbours airs every Monday to Thursday, 6.30pm on 10 Peach, via live-stream or catch up on 10 play

‘Many other names in the pot’: Kylie Minogue and Jason Donovan return for Neighbours finale