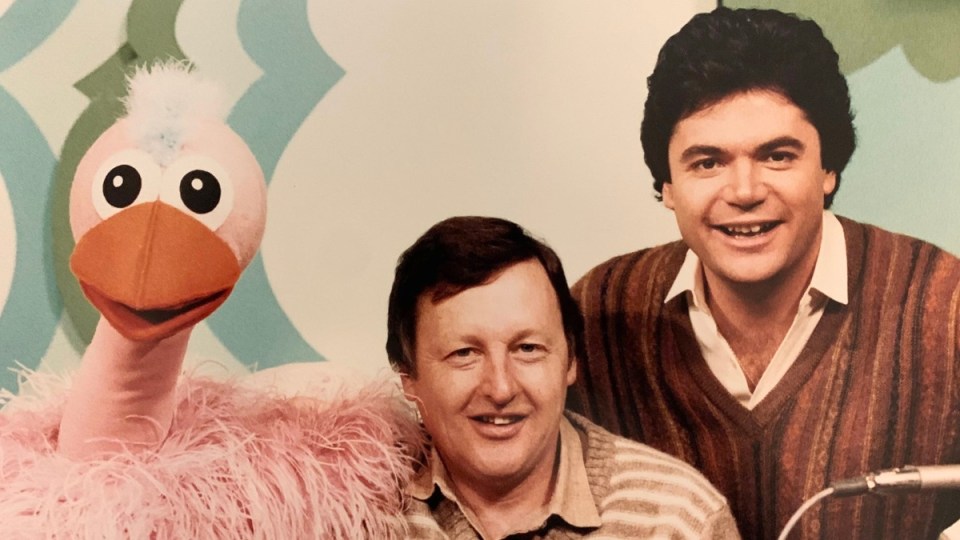 He died in a Victorian aged-care home on Wednesday, aged 92.

Caroll was best known as the sidekick to host Daryl Somers, who paid a heartfelt tribute to his long-time offsider in a social media post.

“It is with overwhelming sadness that I announce the passing of my beloved friend and mentor Ernie Carroll,” Somers wrote on the Hey, Hey It’s Saturday Facebook page on Thursday.

“Ernie was a pioneer of television starting back in the 50s, coming from a radio background to GTV9 when television was in its infancy.”

Somers described his time working with Carroll as “a voyage of discovery”.

“He was a cartoonist, camera operator, sponsor liaison officer, producer, writer, on camera character playing Professor Ratbaggy and, as himself, illustrating and narrating the adventures of Joybelle in the kids’ shows he also produced out of GTV9 in the ’60s,” Somers wrote.

“Of course, he was best known for his creation of Oswald Q Ostrich (Ossie), my loveable and nonsensically funny ‘sidekick’ on Hey Hey It’s Saturday for 25 of its 30-year run.”

Carroll began working with Somers after nearly two decades in entertainment. He started working at Geelong radio station 3GL in the 1950s, before moving to Melbourne’s GTV-9 in 1956 to become a producer for children’s television.

The pair founded Somers Carroll Productions in the 1980s. It produced Hey Hey It’s Saturday, as well as other shows, including Hey Hey By Request, The Ossie Ostrich Video Show and The Russell Gilbert Show.

“I am so grateful for Ernie’s early guidance of my career. He auditioned me for the hosting role on Cartoon Corner … in early 1971,” Somers wrote.

“He was a man of few words with a quiet countenance but when he did speak he imparted great wisdom.”

“I loved him very much”

Somers said he and wife Julie sent their sympathies to Carroll’s daughter Lynne, son Bruce, his grandchildren and his partner of almost 50 years, Miffy Marsh.

“Rest in peace Ern. Forever in my heart.”