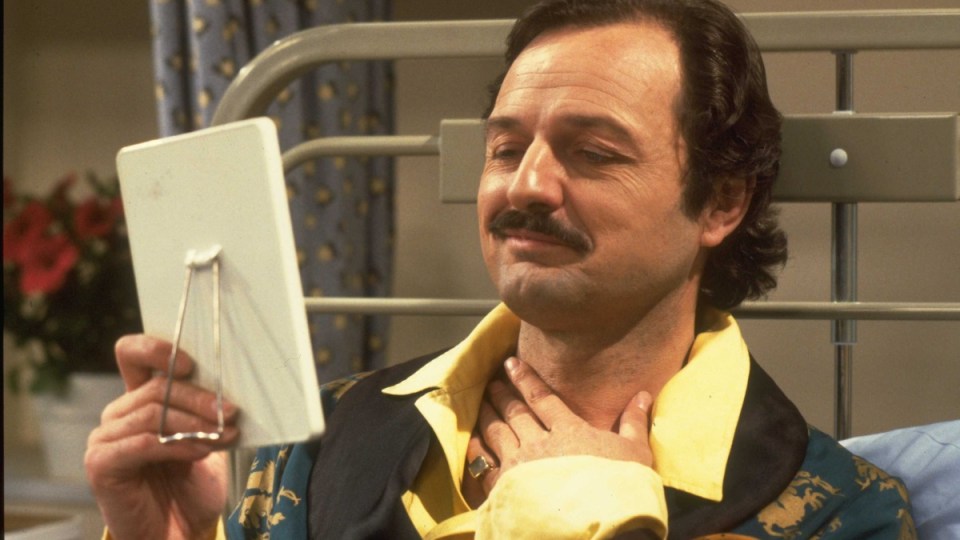 Peter Bowles in character as Archie Glover in sitcom Only When I Laugh, circa 1979. Photo: Getty

To The Manor Born star Peter Bowles has died from cancer at the age of 85.

Bowles was best known for his role as Richard DeVere in the BBC sitcom which aired from 1979 to 1981, starring as the self-made businessman alongside Dame Penelope Keith, with the pair reprising their roles in a 2007 special.

A statement to the PA news agency said: “The actor Peter Bowles has sadly passed away at the age of 85 from cancer.

“Starting his career at the Old Vic Theatre in 1956, he starred in 45 theatrical productions ending at the age of 81 in The Exorcist at the Phoenix Theatre.

RIP Peter Bowles. He was in EVERYTHING – The Prisoner, Survivors, The Avengers, Public Eye, The Saint, Space 1999, Crown Court, Rising Damp, I, Claudius, To The Manor Born, Only When I Laugh. The list is almost endless. And he was great in all of them. pic.twitter.com/NrK1bEN5fL

“He worked consistently on stage and screen, becoming a household name on TV as the archetypal English gent in To The Manor Born, Only When I Laugh, The Bounder and Lytton’s Diary, which he devised himself.

“He leaves his wife of over 60 years, Sue, and their three children Guy, Adam and Sasha.”

Born in London in 1936, he grew up in Nottingham and won a scholarship to the prestigious Royal Academy of Dramatic Art (RADA) before cutting his teeth on stage with the Old Vic Company.

He played villains in several TV series, including The Avengers and The Saint, but it was with a moustache in To The Manor Born, co-starring Dame Penelope and commanding audiences of 20 million, that he became most well known for.

His role as DeVere came in his 40s but his other TV credits include such shows as Only When I Laugh, Lytton’s Diary, The Bounder and Perfect Scoundrels, with reports also saying he had previously turned down a role in The Good Life.

I was fortunate to see Peter Bowles as Archie Rice in The Entertainer at the Shaftesbury Theatre. He was utterly superb and critics wrote that his was the finest Archie they'd seen. He also played an important part in the original production of Gangster No.1 – on and off stage.

Speaking about his success in sitcoms, he told the PA news agency in 2010: “If you have a great popular TV success, particularly in comedy, people don’t think you can act on stage.

“People thought I was just a sitcom actor and the BBC told me I’d never work in drama again. I didn’t realise there were two worlds. It was new to me. I found it very odd and frustrating.”

Growing up, his parents were servants of nobility – his father was a valet and chauffeur to one of the sons of the Earl of Sandwich, his mother a nanny employed by the heir of the Duke of Argyll in Scotland.

During the Second World War his father worked as an engineer at Rolls-Royce and when Bowles was six the family moved to one of the poorest working-class districts of Nottingham. Their house had an outside toilet and no bath.

“We were in a Coronation Street environment, but everyone was extremely friendly and there were lots of kids. It was terrific,” he said previously.

After appearing in amateur plays in Nottingham, when he won his Rada scholarship, he lost his northern accent and was thrown into a melting pot of talent with his peers including names like Alan Bates, Peter O’Toole and Sian Phillips, and he shared a flat with fellow student Albert Finney.

He was reunited with Dame Penelope in a regional tour of Sheridan’s The Rivals, directed by Sir Peter Hall, in 2010.

He also starred in BBC Two series Murder in 2016, which delved into the psyches of everyone involved in a murder case through testimony delivered straight to camera by each character.

He recently starred alongside Jenna Coleman in the popular ITV series Victoria, playing the role of the Duke of Wellington.