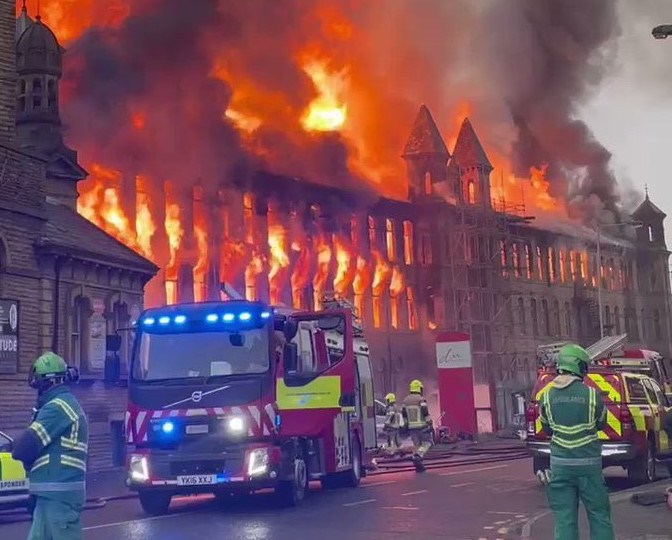 A popular filming location used in Downton Abbey and Peaky Blinders in the UK has caught ablaze. Photo: Twitter

Parts of the sets used to film widely popular TV shows Downton Abbey and Peaky Blinders have been destroyed in a massive fire.

The blaze broke out on Thursday night at Dalton Mills, a factory in the West Yorkshire town in Keighley where both hit shows are filmed.

Teams of emergency services were seen trying to put out the flames, as clips online showed the building wrapped in fire and billowing smoke.

West Yorkshire Fire & Rescue Service said on Friday (Australian time) that 100 per cent of the building had caught ablaze, and that more than 20 firefighters were required to try to stem the burning property.

The status of the fire is still ongoing, the West Yorkshire fire service website states.

“We still have crews and specialist units tackling the mill fire in Keighley. 100 per cent of building involved,” it said in its most recent update.

“Thanks to local residents for their patience and partners for their support as we tackle this incident.”

The Dalton Mills, built-in 1869, was once one of the largest textile mills in Yorkshire. These days it is a prime film and TV shooting location.

Screen Yorkshire, which promotes the region’s screen industry, describes the building as having a “strong reputation as a filming location”.

“Thanks to its diverse range of industrial spaces, which offer an historic industrial backdrop as well as set build space, making it ideally suited to period dramas,” it says.

“The distinctive mills offer a range of large scale spaces and historic features, including a large courtyard and recently renovated clock tower. It is able to accommodate on-site production offices and workshops and has suitable parking for facilities vehicles.”

“It’s one of those amazing locations that is like a destination in its own right,” Mr Knight told the BBC.

“It’s got the kind of provenance and scale that could attract filmmakers from far and wide.”

The cause of the blaze is yet to be determined.

As well as Downton Abbey and Peaky Blinders, feature films The Limehouse Golem and The Great Train Robbery also used the Dalton Mills as part of their Victorian-era sets.

Nick Kyrgios at Wimbledon: Can he win it? Yes, he can
‘Forever grateful’: Kylie Minogue’s sad farewell to Neighbours
Today's Stories