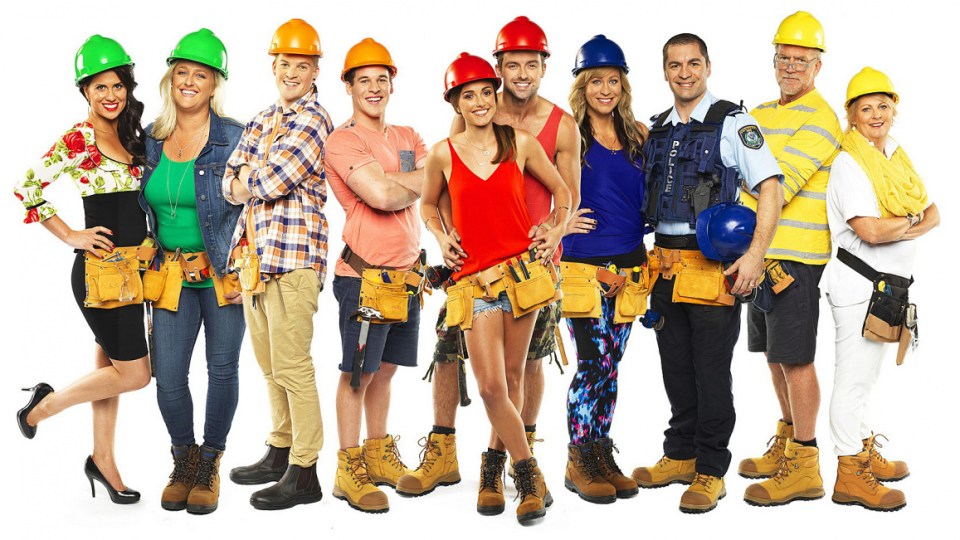 Longtime casting director for The Block, Lucky Price, says all his contestants are like his ‘children‘. No faves. Photo: AAP

Whether you’re a farmer, a geek, a cook, an amateur builder or athlete, there’s a reality TV show designed just for you, and you can have your fame and fortune, all 15 minutes of it.

On any given week on our television screens, you can watch at least six different and highly promoted reality-TV shows, which rate their socks off, featuring ordinary people trying to make reputations for themselves and become household names.

MasterChef was so last fortnight, wrapping up on July 13.

Farmer Wants a Wife was so last week.

Now, its all about the Nine Network’s Beauty and the Geek, a reality TV show where geeks – socially inept men, some of whom are extremely clever computer nerds – are matched with blond beauties, with a countdown to the much anticipated makeovers and eliminations.

And then there’s network’s The Block Fans v Faves, which premieres in August 8.

Hold on, there’s more. In two weeks’ The Voice returns for its 10th season on the Seven network, searching once more for that undiscovered singer, maybe even another former busker, to go on to cut a record deal or sing the National Anthem at sporting carnivals.

“It’s all about “each individual’s appetite for risk versus reward”.

“The reward of satisfying a personal ambition, meeting someone special, or remodelling an unsellable house might outweigh the perceived risk of trial by social or mainstream media.

“Add to that the generational swing towards celebrating (and profiting from) influence and exhibitionism through the new toys of social media, and we can see why reality TV has taken such a foothold,” he explained.

So where do these shows find all their talent?

If you’re a fan, casting calls for reality TV shows go out all the time.

Some shows like The Block – in any given year – receive thousands of applications from ordinary Aussies who want to have a crack at something different. The bounty can be massive at the end and spin-off opportunities can include an invite back to the show, an offer to be on another program or a regular radio gig.

The Block’s casting director for more than 10 years, Melbourne-based Lucky Price, who is also a senior producer on the show, sets the record straight for The New Daily:

“People’s motivations [for being on a reality tv show] are as unique as there are people. When I am looking at casting for a show, I want people to have a genuine want and desire to be there because they’re connected to telling their story in the context to that show’s premise.”

But it’s not always a case of sending in a five-minute show reel.

There are talent scouts out there who walk shopping malls, sit at outdoor cafes and hover at beachside parks looking for that unique face, body shape or a dress sense with attitude.

Take for example the case of two young Melbourne professional men, each approached in different settings off the street by talent scouts for partner-swapping trash-fest Love Island and Nine’s ratings juggernaut Married at First Sight.

Miles, 33, who was queuing for a coffee at popular Prahran Market in Melbourne’s inner east, was approached by two women looking for MAFS talent.

“They didn’t mention much financially … more that it was a great opportunity to meet the woman of my dreams, that the show was trying to shoot for integrity where possible and that I might gain a ‘profile’ as person/C-grade celebrity, and that the prospect of that, could possibly help me fulfil some career goals.

And UK-born Euan, 29, was walking out of a Prahran barber shop when a man and a woman sipping coffee ran down the street after him.

“His opening line was something like, ‘Have you ever thought about being on a reality-TV show?’ Which made me laugh. So I asked him what show he was from.

“And he said, ‘Judging from your accent, I’m sure you will have heard about it: It’s called Love Island’.

‘There’s some sort of magic about it’

Lucky Price says people who apply for a reality TV are “not characters, they’re real people”.

“The way applications have evolved since I started doing The Block 12 years ago, people have really become savvy at how they present themselves.

“They’ve become more in touch with the ‘why’ they’re there. If you’re looking for love, do you really want to be on a reality-TV show looking for love? Some of them do, absolutely.

“These people are not characters. People have layers and are nuanced and have lots of different parts to their personalities, they’re not just villains or bitches, not just jocks or nerds. We all have that ability to be all of those things at any one time.

“I get to meet these people before anyone else knows who they are. I sit on the couch and have a chat. A casting director is a very privileged position to be in.

“It is a job being on reality TV. It is not just all fun and games.”

But when you get called out on social media, or trolled – Mr Price says the networks are “mindful about caretaking the wellbeing of all the participants” – why go on the show in the first place, given we know the premise of reality tv is there is the good, the bad and the ugly.

“That’s showbiz. It’s that intangible, amazing, some sort of magic about it.”

And why do millions tune in every week?

“I suspect the main attraction in watching reality TV, just like watching an elite sports competition live, is the absolute unpredictability that goes along with it,” Karu B says.

“There is something very appealing about seeing raw human emotion intertwined with an unscripted, unrehearsed performance.

“Sometimes tribalism kicks in, and we barrack for our favourites, or shed tears when they are voted out.

“All because it is real.”

‘Some sort of magic about it’: Why everyday Australians go on reality TV shows