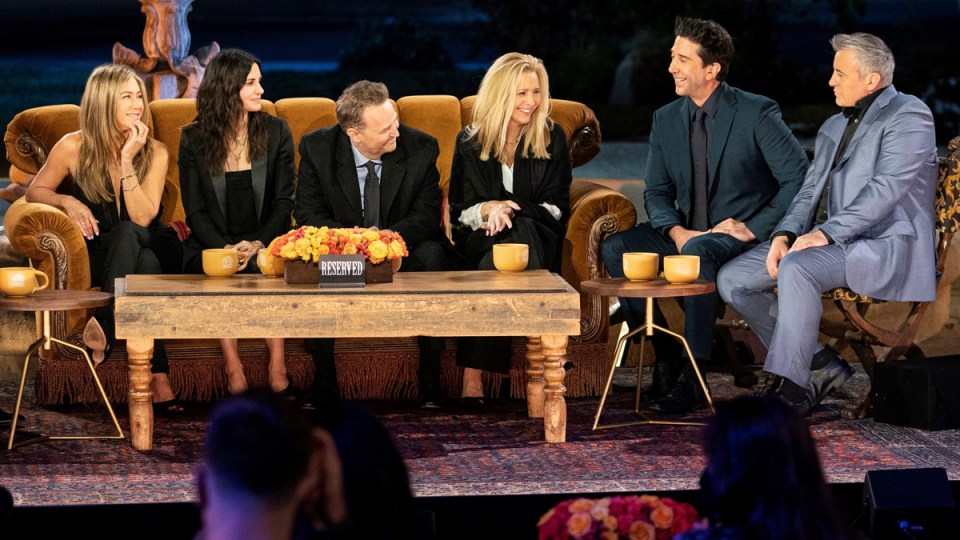 Back on the couch and spilling the beans – the cast of Friends reunites. Photo: AAP

Reunions are meant to be emotional – why tread over old ground if not to feel something?

And so the music and the flashbacks set the tone from the start. This is the long-awaited, highly publicised and expensively produced reunion of the cast of one of the best-loved TV sitcoms ever.

Get the tissues ready! The One Where Your Friends Are Your Family is back!

David Schwimmer (aka Ross) is the first to arrive on the old set, at a Warner Bros lot in LA, made up just how it was back in the day (despite the fact it got dismantled the night of the final taping).

“I want to see everyone!” Schwimmer yells.

Pretty soon they’re all there. Phoebe, Rachel, Joey, Monica, Chandler. All looking like they’ve seen a few years, and maybe a few of LA’s most expensive surgeons.

I’ll be there for you (again)

Hollywood’s Best Friend James Corden, who never has a bad word to say about anyone, plays host to the six actors, who we see chatting on the set, at a table read, and at a taped event filmed in front of the famous fountain.

The special, made for HBO Max in the US and streaming in Australia on Binge, is a big ol’ love-fest designed to dredge up any nostalgia you’ve got left in the tank (we’ve been using a lot of it in the past year).

A recreation of the episode with the quiz – it’s actually called The One With The Embryos – becomes the vehicle for seeing how much the cast remembers about specific episodes (not much!).

The actors, who have been in the same room together only once since 2004, clearly still have affection for one another.

That’s partly because of the experience they shared: Each plucked from almost obscurity to join a show that, by its finale 10 years later, would be watched by 50 million people a week.

“The only other people who really knew what it was like were the other five.”

We get some backstory of how it all came to be, before news helicopters would film the tops of their houses and women asked their hairdressers for The Rachel.

Jennifer Aniston had already been shooting another sitcom when she started playing Rachel, and executive producer and writer Marta Kauffman describes it as essentially a battle to the death to see which show could survive longest (don’t worry about what the other show was called, it’s not important).

Matthew Perry (Chandler) got put forward after filming a pilot for a show called LAX 2194. It was about baggage handlers in the future. Amazingly, it did not get picked up.

We learn about the writing of the show.

The reaction of the in-studio audience to the scene in London, as Monica pops out from under the covers of Chandler’s bed (The One With The Truth About London), inspired the producers to make that relationship more than just a one-night stand.

“We still at that point didn’t realise how far it would go,” Kauffman says.

That storyline became a rich seam to mine for the show’s more emotive side, as well as for jokes.

In the special, Ross recreates his famous scream – inside Ugly Naked Guy’s apartment – from The One Where They All Find Out.

Some of the special’s guest stars also unpack the show’s clever use of physical comedy.

The actor and writer Mindy Kaling brings up the time Chandler, trying to keep he and Monica’s secret, kisses Rachel and Phoebe because they walked in on him kissing Monica.

“They know how powerful a funny visual set piece will be, and it’s funnier than anything they could have said,” Kaling says.

As Game Of Thrones‘ Kit Harrington explains, the “pivot” scene – Ross, Chandler and Rachel carrying a couch up a stairwell – works so well despite its basic premise.

“Nothing really in that dialogue suggests anything massively comic,” he says.

“But what they do in that time, carrying that couch up those stairs, is one of the funniest things I’ve seen on TV.”

The special features a lot of celebrity cameos.

Justin Bieber dressed as a potato. Cindy Crawford modelling Ross’s leather pants. David Beckham, Tom Selleck, Carla Delevingne. Turns out if you get the cast of an uber-sitcom in a room together, agents just start throwing celebrities at you.

Lady Gaga and Lisa Kudrow doing a duet of Smelly Cat (with a robed choir on backing vocals) takes the joke a whole lot further than a ’90s American sitcom ever would have.

Corden gets the scoop

In a three-quarter-time reveal that almost seemed like it was, you know, scripted for TV, the actors went quiet when Corden asked if there were ever romantic entanglements between the young cast.

“I had a major crush on Jen,” Schwimmer admits.

“It was reciprocated,” she says.

Schwimmer says: “How did everyone not know we were crushing on each other?”

To which everyone replies: Yeah mate, we knew.

Cue lots of out-takes of Aniston and Schwimmer being cutesy as heck on set.

Aniston says they never acted on their urges at the time because they were both in relationships, instead channelling their feelings into their characters, whose will-they-won’t-they tension was a constant source of gags (“We were on a break!”).

This is the last time (probably)

We also learned that, no, there is no plan to make any more episodes of the show, which connected with both Gen X and Society of the Serpent when it aired and now, for reasons no one can explain (TikTok), also Gen Z.

So the reunion ends where the show did: With a lot of tears in a fake, too-big New York City apartment in Burbank, California.

“There was a lot of crying that night,” Matt Le Blanc (Joey) recalls of that final taping and the impromptu on-set pizza party that followed it.

In case you didn’t catch the wholesomeness in the preceding one hour and 39 minutes, we hear an orchestral version of the theme song, and Courteney Cox (Monica) sums up why we’re all here, 17 years later, thinking about how Friends was always there for us.

“It was life-changing and it forever will be, not just for us but for the people who watched it.

“That is such a great feeling to carry forever.”

Friends reunion show – many tears and the odd bombshell