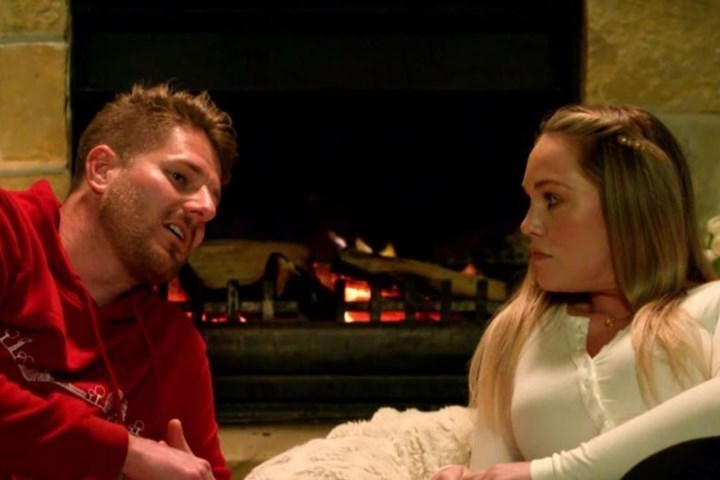 Married at First Sight is no stranger to criticism – and from the amount of complaints made to the nation’s media watchdog in recent weeks, it’s clear the show has struck a deeper nerve than ever before.

Upset viewers have told the Australian Communications and Media Authority they are worried about “personally abusive interchanges between participants through gaslighting, social, verbal and mental abuse” in the show.

But while complainants have slammed MAFS producers for “promoting” domestic abuse, others argue that the toxic relationships depicted on screen could help shine a light on darker truths, closer to home.

Heroes and villains … and ourselves

Nothing rallies the public, and brings us closer together, than hating a reality TV flog, and this year MAFS producers have blessed us with a few.

Leading the pack is hot-headed Bryce, whose blatant emotional manipulation of wife Melissa has many of us shouting at our screens, begging her to ditch the deadweight.

It also led to the creation of a Change.org petition that garnered 3500 signatures within 24 hours, calling for Channel Nine to issue an apology over the “triggering” scenes, which have been compared to domestic violence.

Bryce is supported by his on-screen best mate Jason, who blindly defends Bryce’s abusive behaviour, even at the cost of his relationship with wife Alana.

The Bryce-Jason bromance brings viewers a disturbing yet accurate insight into the way some men band together to protect their “bro”, and thus perpetuate toxic masculinity.

There is Bec, whose constant put-downs of her husband, Jake, make us wonder how either of them can possibly stand being in the same room.

There is Patrick who seemed, for a while, to be a genuine sweetheart, but who consistently pushes for more intimacy with wife Belinda, despite it being apparent to everyone in Australia that she does not have romantic feelings towards him.

(This is to say nothing of the unnecessarily aggressive letter he sent to fellow wife Booka, or that he enthusiastically reveals intimate details about his sex life with Belinda on national TV, after promising to remain discreet.)

And who can forget James, who could teach a masterclass in gaslighting, as evidenced by his attempt to convince Jo (whom he had ignored and physically hidden from for days on end) that he had been “trying” to save their marriage.

At best, these relationships are drama-filled. At worst, they are harmful and emotionally abusive.

But can watching these trainwrecks unfold hold a mirror to our own relationships, and show us things we might have missed?

What’s in your reflection?

Psychologist and social commentator Lyn Bender said audiences could learn to recognise signs of abuse in their own relationships, but the show’s failure to call it out may actually result in the opposite.

The relationship dynamic between Bryce and Melissa is textbook domestic violence. No actual “experts” in their right mind would ever match these two #MAFS #MAFSAU

So far, experts have been somewhat lax in identifying and adequately reprimanding abusive behaviours between the couples.

“Bryce is insecure in himself, and if he was secure he wouldn’t put [Melissa] down,” Ms Bender told The New Daily.

“What he’s doing is securing his position as more dominant, and the reason he wants to do that is probably his own insecurity, and beliefs about what makes him masculine and desirable.

“What [producers] have done is very intentional. It’s very likely these two personalities will create that type of reaction.”

The marriage between Bryce, 31 and painfully insecure Melissa, 31, displays any of the tell-tale signs of domestic violence.

Despite Melissa’s confession of abandonment issues, Bryce continuously threatens to leave the experiment.

He isolates her from the women in the group, and uses a manipulation tactic known as ‘love-bombing’, where an abusive partner showers the other with affection to distract from other signs of abuse.

If that wasn’t upsetting enough, Bryce forcefully kisses another bride against her wishes – an incident in which Melissa sympathises with him.

Melissa did NOT just apologise to Bryce that he had to go through him sexually assaulting another woman #MAFSAU #mafs pic.twitter.com/lT4AMjKJw3

“There is an ethical issue with putting all of this on display,” Ms Bender warns.

And while Bryce is a certainty for this season’s villain, his actions aren’t the only ones we should be wary of.

Patrick has played the role of the socially awkward, loveable goofball this season, who isn’t afraid of calling out Bryce for his behaviour.

In doing so, he has positioned himself as a hero, existing in sharp contrast to Bryce’s villain edit.

But his oddly premature declaration that he might be falling for Belinda, who has displayed few signs she sees him as anything more than a friend, is why Ms Bender suggests Patrick could be “a wolf in sheep’s clothing”.

“It’s another way of grooming,” she said.

Patrick has expressed, on multiple occasions, that he is unhappy with the pace of the sexual intimacy between himself and Belinda.

“He’s doing slight emotional blackmail. She might think, ‘Oh this guy is very patient and he loves me, maybe I should try harder’,” Ms Bender said.

“It’s manipulation, and that’s its own form of narcissism – it’s all about how he feels and he’s not taking notice of how she feels.”

Patrick is that guy who will slut shame a woman to get the bros to like him. #MAFSAU

And since Bryce has established himself as this season’s resident douchebag, the more subtle-yet-equally concerning behaviours of other participants have been overshadowed and neglected.

Worse still, they seem to be normalised and accepted.

“We can identify these patterns emanating from ideas about gender and relationships,” Ms Bender said.

Show shines a light … and MAFS should acknowledge that

Jacqui Watt, CEO of men’s referral service No To Violence, said the show’s producers must accept some responsibility for promoting unhealthy relationships to viewers.

“If you think of who the audience are, they might be very impressionable young people,” she told TND.

“You’re promoting some of these behaviours that we know might not in themselves look dangerous, but ultimately can get women killed.”

To help inform viewers about the damaging behaviours displayed on the show, she said the program should display domestic violence helplines at the end of each episode.

If you’re concerned about your relationship, here are some questions to ask yourself about your partner.

“There are all sorts of ways controlling behaviour can manifest,” Ms Watt said.

What can we learn from the abusive relationships on Married at First Sight?