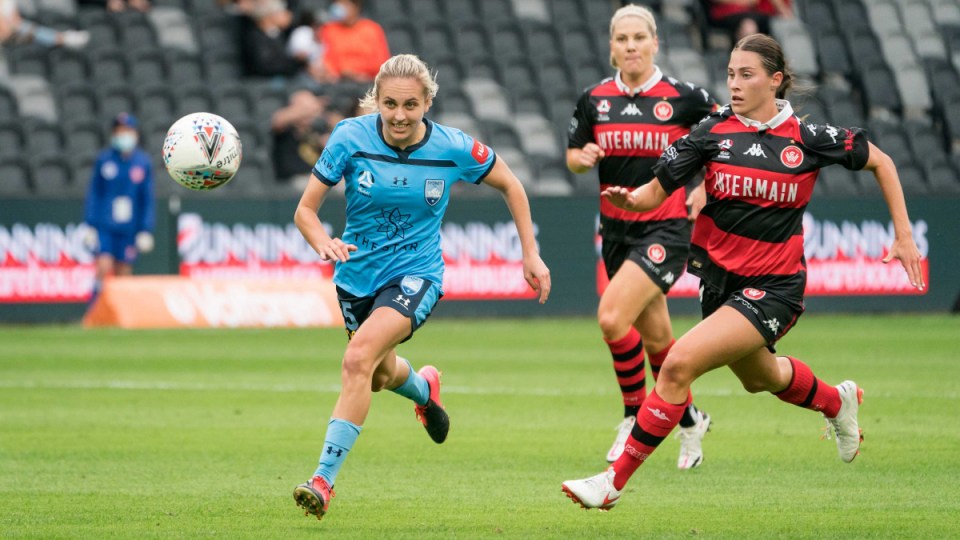 Foxtel and Kayo broadcast the W-League along with 16 other women's sport competitions. Photo: Sydney FC/Jaime Castaneda

Public servants worked on the weekend and into the night to get a $5.5 million taxpayer-funded grant for Foxtel processed before an end-of-financial-year deadline.

Documents obtained through the Freedom of Information (FOI) process reveal the push to pay the latest instalment of a $40 million program for the broadcast of women’s, under-represented and niche sports.

It is the first time the public has seen the reports at the core of Foxtel’s justification for the money.

Emails and ‘minutes’ also note the Communications Department’s satisfaction with Foxtel’s performance and the devastating impact COVID-19 had on sport in 2020.

In 2017, in a single line in the budget, Fox Sports was given a $30 million ‘no tender’ grant to broadcast the sports.

After Foxtel was initially snubbed in a 2020 COVID rescue package of grants for media, a $10 million extension was fast-tracked through Cabinet, side-stepping the usual guidelines for approving policies.

The deal has been controversial because it has never gone to tender on the open market, so the ABC, Nine, SBS, Seven, Ten or others could pitch for it.

Fox Sports is only available by subscription, meaning taxpayers must pay to watch sports they are already paying to have broadcast.

“Mike, we will need to get the 2020-21 Strategic Roadmap from Foxtel in order to process the $5m before Tuesday,” a Communications Department staffer wrote in an email to assistant secretary Mike Makin at 2:00pm on Sunday, June 28, 2020.

“Hi [redacted]. Just touching base to see whether you’re in a position to send us the 2020-21 strategic roadmap to us today? Given it’s EOFY (end of financial year), we do need this plan today in order to enable us to process your invoice this financial year.”

Mr Makin, who was the officer authorised to decide what was released or censored from inside the department as part of this FOI application, forwarded the email 20 minutes later.

Within an hour, an unnamed Fox Sports employee emailed that the Strategic Roadmap, required for the payment, would be sent shortly.

By the afternoon, it arrived.

“Thank you for your quick response on this,” Mr Makin responded at nearly 7:00pm. “The team and I will review and come back to you tomorrow.”

The department appeared satisfied with what Foxtel had provided.

“Fox Sports has demonstrated robust governance, and appear committed to maximising the full potential of the grant with a forward work plan that targets under-represented and niche sports.”

The exact same words were used in a minute marked September 26, 2019.

In both minutes, a page delving into greater detail titled “Department’s assessment of the deliverables associated with this milestone” has been entirely redacted as “irrelevant” under the FOI assessment.

Responding to the documents, a Foxtel spokesperson said in a statement that over 2 million subscribers had access to view the sports broadcast through the grant.

“We are also taking to opportunity to innovate and, where our rights permit, every sport supported by the grant will have games available on (online streaming service) Kayo free, in front of the paywall,” they said.

This development would mean that, for the first time, taxpayers would be able to watch sports they had paid to subsidise without having to pay again for a subscription.

The 2020 assessment explained how significant the impact of COVID-19 had been on sports leagues, clubs and organisations.

“The grant is even more critical to the community over the next two years,” it read.

This is due to “cancellation and postponement of professional and amateur competitions, income loss from registration, membership fees and gate revenues, dramatic loss of sponsorship funding and decrease of lice (sic) broadcast hours and overall media coverage”.

The documents also note the impact of postponing the 2020 Olympic Games.

“Despite the potential for reduced content, in many circumstances, our partners will require an increased funding commitment from Fox Sports as their other major sources of revenue such as sponsorship have been greatly diminished.”

Comparing the road maps from before and after the start of the pandemic exposes just how badly hit professional sport has been.

The amount of sport broadcast in 2016/17 is used as the benchmark for the grant, so even the COVID-affected year is still well above that threshold.

The documents also noted that Fox Sports is spending more on the broadcasts than it is being paid.

“The costs incurred by Fox Sports for the acquisition and broadcast of women’s, niche and emerging sports in 2019-20 will exceed the grant allocation,” a Foxtel document noted.

“Some partial expenses have been omitted and not all women’s, niche or emerging sports competitions broadcast … are listed.”

Jerril Rechter, chief executive of Basketball Australia, said the grant meant the 2020 WNBL season was the most visible in its 41-season history.

“Every single game of the 2020 WNBL season was streamed live with multiple cameras and expert commentary on Kayo,” she said.

“In addition … up to three games per week were broadcast live across Australia on Fox Sports with enhanced camera angles and syndicated on the ABC primary channel and ABC iview.”

The coverage allowed the organisation to promote the game, she added. Games were streamed globally on the FIBA YouTube page (although not available to local viewers).

“Without this investment, which is tied into the government’s under-represented sports funding and women’s sport, there is no way the WNBL would have received the coverage and visibility it did in 2020, and we are hopeful that support will extend into next season,” Ms Rechter said.

The Australian Baseball League’s chief executive Cam Vale said the broadcast had taken the sport from only being available on YouTube, directly onto lounge room televisions.

“It was free, but you had to be in the know, to know where we were. We were this great secret that was trying to break out!” he said.

“Now we’re moving from a known fan base to that broader sports fan.”

The money from the grant offsets about half of the cost of producing the broadcasts, enabling the league to make a better-quality product and improve its chances of selling the games internationally, primarily to the US and Asia.

How you know this

Freedom of information, better known as FOI, gives the public access to documents created by governments.

You can apply for information departments and agencies hold about you, or about issues you care about. Search ‘FOI’ on most government websites to find out more.

Foxtel was allowed to object to the release of the documents but did not take up the invitation.

The documents were heavily redacted for reasons of personal privacy, commercial-in-confidence or because the assessor considered them irrelevant to the search requested.