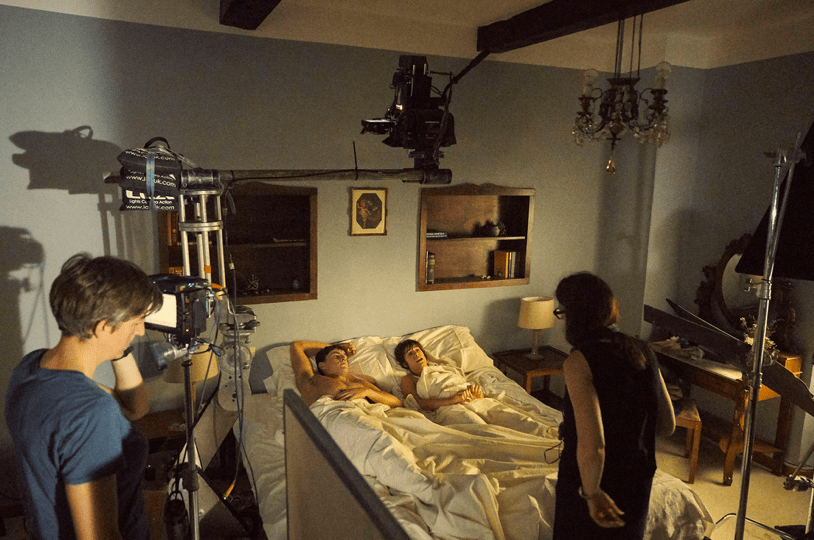 Sex scenes are nothing new, but #MeToo has fuelled the rise of 'intimacy coordinators'. Poto: Enda Bowe/Element Pictures

Intimate scenes are nothing new in film and television, but the process behind creating simulated sex is evolving.

Actors and directors have traditionally been left to their own devices when producing intimate scenes. But following movements such as 2017’s #MeToo, ‘intimacy coordinators’ have emerged as a prominent third-party.

Intimacy coordinators choreograph intimate scenes and liaise between actors and directors to make sure everyone feels safe and knowledgeable about what the scene involves and what is expected of them.

Depending on the production and coordinator, other responsibilities can include developing protocols determining how footage is handled in post-production to coordinating with various departments such as set design, costume, and lighting.

“A stunt coordinator is there to take care of the health and wellbeing of the actors and the stunt performers, but they’re also there to deliver something artistic … [fitting] the artistic vision of the director and the producers. That’s exactly the same as an intimacy coordinator.”

Intimacy coordinator for Netflix’s Bridgerton, Lizzy Talbot, is also the co-founder and director of UK-based Intimacy for Stage and Screen. She became involved in intimacy coordination after noticing the “inequality between the protocols of fight and intimacy” while working as a fight director in 2015.

“We had a lot of … rules and protocols to ensure that [fight work] was safe, but there was absolutely nothing surrounding intimacy, and yet it was physically, emotionally, and mentally dangerous work at the time,” Talbot said.

While intimacy coordination refers solely to work in film and television, intimacy direction can also refer to the theatre.

Danielle Micich, Australian maker of contemporary performance and intimacy coordinator for Stan Original series Bump, said intimacy direction always felt like a part of stage work. She only started to feel it was something separate when she began to get offers to do it in film and television.

When you are a performer … there are so many moments where it can be intimate or quite physical, [you’re] expected to cope and to know what to do,” Micich said.

As a performer, Micich was asked to do intimate scenes with no guidance or support. Over 25 years in the industry, she built a process that works for her as “a person who felt responsible to those who were doing these scenes and were looking for guidance.”

For Bump actor Carlos Sanson, having Micich as an intimacy coordinator on the production was a relief when working on intimate scenes for the first time in his career.

I always wondered, watching TV and movies, how actors did these scenes … how they did them safely, properly, and with respect for each other,” Sanson said.

In Talbot’s experience, the presence of an intimacy coordinator is also a relief for those in other production departments who risked their jobs to advocate for actors.

“Because the actors spend so much time with costume and hair and makeup, they would build a really solid rapport with them. So [the departments] … had this desire to protect actors,” Talbot explained.

“Those people have been advocating for actors long before [intimacy coordinators] have been doing it.”

The film and television industry is littered with stories of actors feeling pressured into performing scenes they were uncomfortable with.

Through teaching intimacy coordination at institutions such as NIDA, Poulton hopes to create “different expectations” for young actors beginning their careers.

“I think they hopefully go out into that workplace with less trepidation and with confidence … and having a clear understanding of what they can do,” Poulton said.

Despite fears from creatives in the film and television industry, intimacy coordinators are quick to say their role does not hinder the artistic process.

“If I know all these things, you can be as spontaneous as you like, but just doing what you want on a set because you feel like it, that’s…an attitude I’m hoping we can reverse.”

Sanson said his creative process as an actor was not hampered by having his intimate scenes choreographed and intensively rehearsed.

“If anything, it made it easier, because once you do all your preparation as an actor, then you sort of chuck it out of the window and you just go for it,” Sanson explained.

Part of you sort of forgets about it and you just let the scene take over, but in the back of your head, you know what happens next.”

While intimacy coordination is fast becoming a staple of high-budget American and British film and television, the movement has been slower to grow internationally.

“I will absolutely share knowledge, but … [it’s] important to understand that what works in one country might not work in another country, because there are so many cultural aspects to take into account,” Talbot said.

“I think it’s more effective if you, from that country, can instigate change.”

In Australia, Micich and Poulton are seeing an increasing amount of work for intimacy coordinators, but there is still a lot of room to grow.

“People are definitely trying to develop certification programs here, but it’s very much in its infancy and we do really rely on the training and the mentorships that we have [from overseas],” Poulton said.

Micich said, “I definitely think that there is a need for [intimacy coordination], and I think it is slowly being introduced … we’re just catching up.”

From #MeToo to ‘intimacy coordinators’: Meet the people choreographing sex on screen