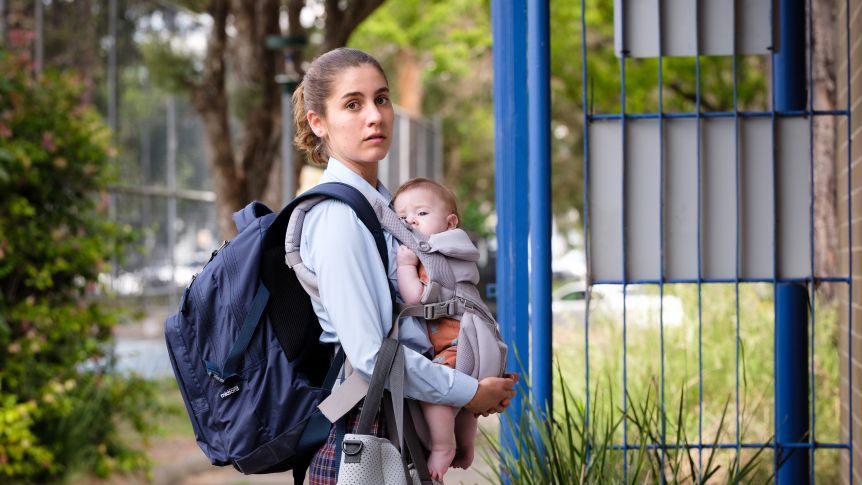 Nathalie Morris plays Oly, who must figure out how to mother an unexpected baby and retain her dreams. Photo: Stan/Roadshow Rough Diamond

Believe it or not, 2021 already has a contender for best Australian show of the year: Stan series Bump, which dropped its first season of 10 half-hour episodes on New Year’s Day.

The show was soon trending on Twitter as many – either stuck home due to COVID restrictions or perhaps recovering from some of the previous night’s festivities – were sucked in by its charm.

According to the streaming service, the series has already “broken viewing records for Stan since its launch”.

So what is Bump about?

At the start of the series, we meet Olympia (Oly) Chalmers-Davis, an ambitious, painfully determined inner-Sydney high school student who has a 10-year plan that begins with blitzing her way through her remaining years of high school and ends with her working at the United Nations.

But those plans are thrown into disarray when she unexpectedly goes into labour at school.

Writhing around in the back of an ambulance and informed by the paramedic that she’s about to give birth, the 16-year-old reacts – as anyone would react when faced with little to no warning about what’s about to come out of one’s birth canal – with: “No way! F— that!”

Hang on – what? A surprise pregnancy?

What happens in Bump could be easily dismissed as the stuff of urban legend or purely sensationalist tabloid fodder, but these kinds of pregnancies do happen.

In Bump, a psychologist at the hospital calls Oly’s pregnancy a “concealed pregnancy” – though it’s better known as a “cryptic pregnancy”. And it’s more common than you might think.

OK sorry for interrupting, go on

After the safe arrival of her baby daughter, Oly must come to terms with what’s just taken place and find a way to navigate teen motherhood with the help/hindrance of her parents (whose marriage is crumbling), best friend, boyfriend and new in-laws.

Who’s behind this series?

Bump comes with a serious screen pedigree, reuniting producer John Edwards (Offspring; Puberty Blues) and actor-producer Claudia Karvan – who collaborated on two of Australia’s most beloved series: The Secret Life of Us and Love My Way.

Karvan co-created and is a producer on Bump, but also plays Oly’s mum Angie, a teacher at her high school.

The series was co-written and created by former journalist Kelsey Munro, a TV newcomer who said she saw the story of a teen girl who is unaware of her pregnancy until going into labour as “a good metaphor for the shock of motherhood”.

Who else is in the Bump cast?

Canberra-born, New Zealand-trained actor Nathalie Morris (playing Oly) has some TVNZ (New Zealand’s version of the ABC) credits under her name, but this is her debut on this side of the Tasman.

Morris holds her own against Karvan and industry heavy hitter Angus Sampson (Fargo, The Walking Dead, The Mule) who plays her slacker father Dom.

The father of baby Jacinda (as she comes to be known) is not in fact Oly’s boyfriend Lachie, but Santiago (or Santi) Hernandez, a sensitive 17-year-old caught between his father’s aspirations for his life and his own desires, played by Carlos Sanson Jr (Netflix film Malibu Rescue: The Next Wave).

Sanson Jr told Nine.com.au that he had relocated to Hollywood to take advantage of an entertainment industry more welcoming to Latinx actors, but landed this role after being forced home due to COVID-19.

Binged all of #BumpOnStan last night. My Chilean-Australian heart is very happy! We never get representation of any kind and it was spot 👏 on 👏

Steven Arriagada, whose father is Indigenous Chilean, was part of the writers room and Argentina-born stage and screen director Leticia Cáceres directed a block of episodes.

“So from that very far up chain of the creative process it’s being filtered through that authenticity,” Sanson Jr told Nine.com.au.

So is this a comedy or more of a drama?

While Oly’s initial choice of adoption for her baby is oddly and quickly dismissed, the show bypasses any moralising on teen sex and pregnancy.

Instead, it cuts straight to the confronting challenges of motherhood (from mastitis to explosive baby diarrhoea) and the ever-complicating lives of the two different and dysfunctional families at the centre of the series.

What comes with that territory is a healthy dose of humour, drama and romance, but perhaps Meg Watson in The Guardian puts it best, describing Bump as a “telenovela in Sydney’s inner west”.

What are the critics saying?

In ScreenHub, Mel Campbell makes the case for situating Bump as “a Claudia Karvan urban fantasy … You know what you’re getting with her: A quirky relationship drama in a prosperous fantasy version of inner suburbia, unmoored from some social realities while heavy-handedly flagging others”.

Ultimately, Campbell said, “it’s a sweetly satisfying watch for its melodramatic focus on emotions; but it’s sharper and smarter than other Australian dramas that use comedy as a spoonful of sugar to help the woke medicine go down”.

I watched all of #BumpOnStan yesterday and really liked it! It’s got a lot of heart and the cast are wonderful. Claudia Karvan is obviously a given but the young cast were standouts too. Lovely natural chemistry between them all. pic.twitter.com/CrVaO5eSSZ

In her glowing review, Watson said the show is “a welcome escape from our own 2020 horror stories and a reminder of what unexpected joys can arise after everything goes horribly wrong”.

This writer (hi, reader!) appreciates the way sex – teen and adult – is treated with frankness and dignity, and the soundtrack, which will introduce you to a bunch of Latin American music and the dulcet tones of Melbourne singer-songwriter Sweet Whirl.

Will there be a Bump season two?

Yes! Stan recently renewed the show for a second season, with filming to commence later this year.

And expect more local content from the streaming service, as it announced in 2020 it intends to commit to more than 30 Australian productions over the next five years

Bump is now streaming on Stan.