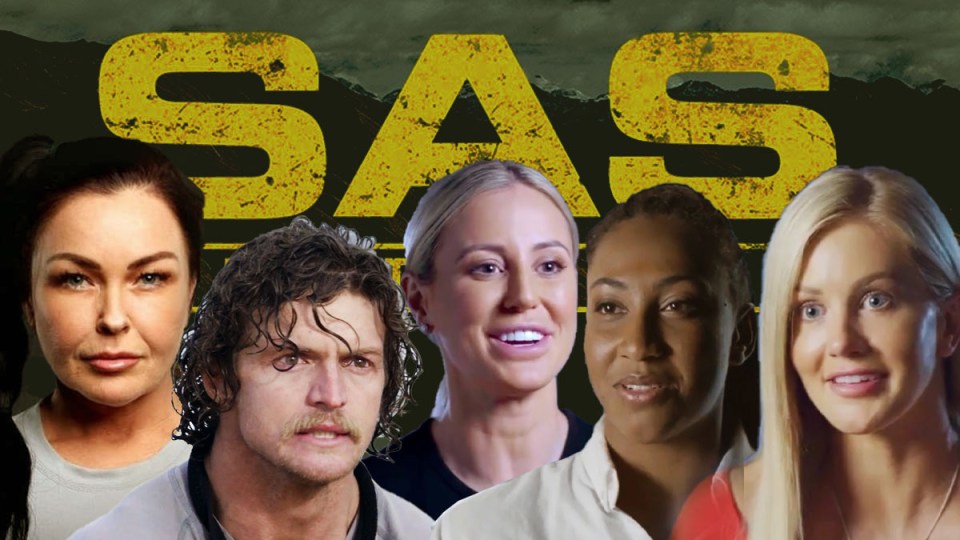 The new, military-style program is set to break some of the nation's biggest B-listers. Photo: Getty / TND

The premiere of SAS Australia promises mud, sweat and tears, though its cast of so-called celebrities leaves much to be desired.

The sadistic SAS Australia directing staff, or ‘The Staff’ as they are called, really want to get across that they don’t know or care who these celebrities are.

This is relatable because, bar a few vaguely familiar faces, we don’t really know them either.

Contestants arrive with black hoods over their heads, and we learn they are in for a brutal and extreme two weeks of physical and psychological anguish.

The clear headliner and most recognisable name is convicted drug smuggler Schapelle Corby, which may or may not be a thinly-veiled commentary on the type of people we elevate to celebrity status in this country.

Aside from Corby, there’s The Biggest Loser’s Shannan Ponton, public relations queen Roxy Jacenko and former rugby player Nick ‘The Honey Badger’ Cummins, who found mainstream fame when he ditched his final two contestants on The Bachelor in 2018.

The first task the contestants are forced to endure is a nerve wracking backwards pin-drop out of a helicopter into icy water, and this is where Jacenko tells us she has never experienced failure in her whole life.

“I’ve never had a failure,” Jacenko boasts, ignoring her admitted marital infidelity and drug and alcohol abuse while her husband was in prison for insider trading in 2016.

Many contestants use this opportunity to divulge the reason they joined the show and, predictably, almost everyone talks about proving something to themselves and the public.

Nobody mentions their rumoured $150 000 paycheques.

Former Bachelorette and Bachelor in Paradise star Ali Oetjen has the best answer of all, and lets us know she joined this particular reality TV program to prove to Australians that she is “more than just the reality TV girl”.

This is said unironically.

Between barking in contestants’ faces, and forcing them to crawl through the mud in freezing-cold temperatures, the rough-as-guts Staff on SAS Australia pull no punches.

The tears are plentiful, so if you’re the type of person who gets off watching privileged people break down and cry, you have come to the right place.

Contestants use exposed basins to bathe in, and sleep in one large room, full of uncomfortable-looking camp beds.

As anyone who has been on a school camp will know, the hardest task of all may just be trying to sleep in a room full of potential snorers (and The Honey Badger looks like he has a loud set of pipes on him).

Later, contestants are made to wear headgear and boxing gloves to fight each other, and are encouraged by The Staff to “punch holes” in each other’s heads.

This is bad news for anyone who makes money off their face (so, most of them).

AFLW player Sabrina Frederick establishes herself as the alpha female by choosing to take on The Honey Badger.

“I’m a black woman, in a same-sex relationship, working in a male-dominated sport …  I know what women can do.”

It’s possible Frederick also watched Cummins’ season of The Bachelor and is keen to get a fist in for womenkind.

While Frederick serves us girl power, actor Dirani is the first contestant to slip up and disrespect The Staff, earning the entire team a dip in an ice-cold creek.

Shape up or ship out

Six hours into day one and already at breaking point, Roxy ‘I’ve-never-had-a-failure’ Jacenko throws in the towel at the thought of a chilly dip and announces her withdrawal from the show.

Though it may be enticing to sneer at Jacenko’s six-hour effort, anyone with a sibling or partner who consistently uses all the hot water will sympathise with Jacenko’s aversion to a sub-zero ice-bath – it’s just inhumane.

The episode ends by giving us exactly what we came here for: some of the nitty, gritty details about Corby’s life in lock-up.

With a black hood over her face, Corby is led into an interrogation room to rehash the trauma she suffered in an Indonesian prison and the loss of her father in 2008.

“I don’t eat meat anymore because my hallucinations were so vivid that I thought I was eating my dad’s human flesh,” she said.

“The only way my body could handle it was to hallucinate.”

For the most part, the conditions of SAS Australia do appear to mimic the real-life conditions of the Special Air Service regiment that it was modelled after (minus the alleged war crimes).

Of course, Corby’s controversial casting in the show will no doubt ruffle some feathers but if you follow any of the other B-grade celebrities on the show, or if you are looking to satisfy your sadistic side by watching pretty people sob, you might consider tuning in.

And who knows, if Channel Seven is able to secure a second season, they can always call drug smuggler Renae Lawrence.

Recap: We watched the premiere of SAS Australia so you don’t have to