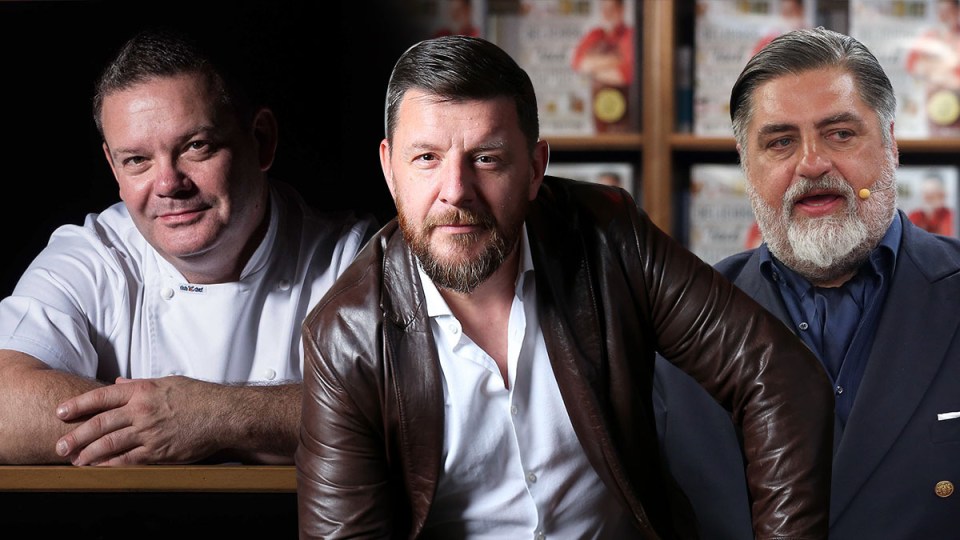 Will the new format entice viewers or have these celebrity chefs reached their expiry date? Photo: Getty / TND

Channel Seven’s latest competitive cooking show Plate of Origin is set to sizzle, but the choice to feature dumped MasterChef and My Kitchen Rules judges might leave viewers with a sour aftertaste.

MasterChef alumni Gary Mehigan and Matt Preston, who were booted in July last year after a decade on the show, have joined MKR’s Manu Feildel.

But are audiences sick of seeing the same headliners?

TV commentator Steve Molk, from TV Blackbox, said while the famous faces are still likely to attract audiences, the new project might have missed a golden opportunity to mix things up.

Melissa Leong, one of this season’s MasterChef judges, has quickly emerged as a fan favourite, finally adding some highly demanded diversity to the judging panel.

Melissa Leong is essentially the top judge. Her descriptive & creative culinary words are a breath of fresh air. Beats the standard “bangin” from the gents. Loving the new faces. #MasterChefAU

“Manu, Gary and Matt are mates – they’ve known each other for some time, so that on-screen chemistry will be reasonably instant,” Molk said.

“As far as the comparison [to this season of MasterChef], straight away that is an easy one to make: Where are the women? Where are the people of colour?

“Why is this, again in Australia, hosted by three white guys? That’s not Gary, Matt and Manu’s fault, that’s the producers of the network.

“They’re anchoring that the people of colour and the diversity will get played out in the rest of the cast, because the whole hook for Plate of Origin is diversity in our culinary attempts.”

Plate of Origin will feature 10 partners who will compete to cook a number of delicious dishes representing 10 different countries.

Seven has yet to release its premiere date.

Sources say the Australian cuisine will be comprised solely of Vegemite, party pies and fairy bread.

The other obstacle that Plate of Origin faces is whether audiences will have an appetite for yet another cook-off so late in the year.

The long-standing battle between MKR and MasterChef – two of the highest-rating shows for Channel Seven and Network 10 respectively – proved audiences were hungry for competitive culinary content.

We're bringing you a competition like no other, and we guarantee you're not going to want to miss it. 💫 Let the flames begin! 🔥 #PlateOfOriginAU Coming soon to @channel7

With MKR not so gracefully bowing out of the competition earlier this year, there theoretically should be room for a new flavour.

But Plate of Origin is a late entry to the game, and airing so far into the year might mean the series will miss the boat entirely.

“They’re the most recognised faces in food television on commercial TV – the challenge is going to be whether or not the audience warm to them as much as Seven hope they do,” Mr Molk said.

“We’re about to dive into ‘love’ head first with Bachelor in Paradise, The Bachelorette and The Bachelor.

“We have ‘renovation’ coming our way with The Block. We’ve got, ‘Let’s get exercising and physical’ with Ninja Warrior – Is Plate of Origin going to work at the back end of all of this when we have already had our fill of comfort food shows?”

This is the question on everyone’s lips.

Spicy or stale: Plate of Origin serves up MasterChef and MKR judges