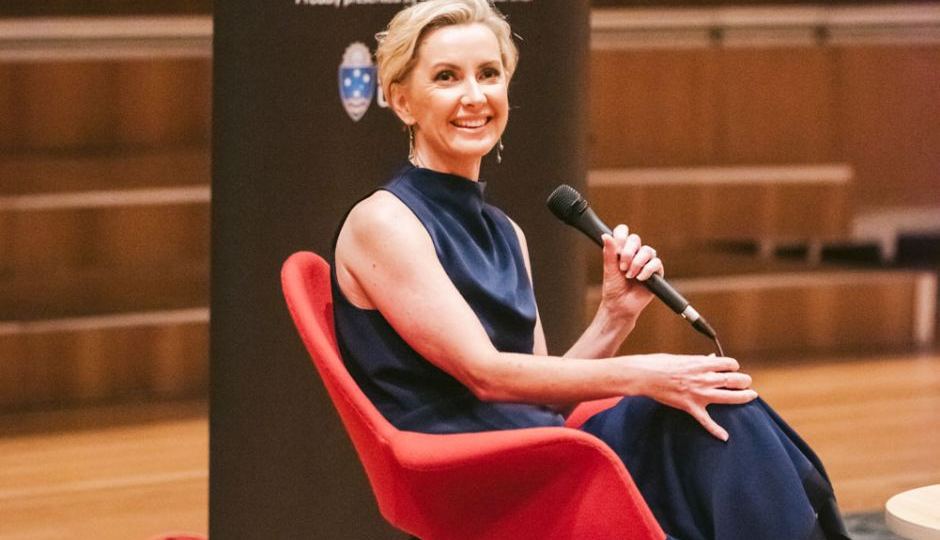 Deb Knight spoke at a Women in Media event in Brisbane on Friday night, ahead of International Women's Day, Photo: Women in Media

Television and radio presenter Deb Knight knows what it’s like to be trolled on social media.

About how ordinary she looks without make-up, how bad a mother she is because she works too hard, and how “repulsive” her baby bump was on TV when she was pregnant with her third baby at 42.

‘”Even yesterday, I post pictures of who I interview on radio and I had just spoken to Wally Lewis, so I posted a picture – immediately someone posted on my Instagram account saying, ‘Well, you look so different without makeup’,” she said.

“And it is like, ‘No shit, Sherlock’, you know? Wow! I mean, it’s not casting judgement, but it really is a bit tiresome.”

Speaking at a Women in Media event in Brisbane on Friday, ahead of International Women’s Day on Sunday, Knight recalled how she vehemently hit back at critics last year when viewers slammed her for a fiery interview with One Nation leader Pauline Hanson.

Knight had just arrived on a plane from Sydney to Brisbane, had slicked-back hair and little make-up.

The subsequent viewer remarks were cruel, to say the least.

Knight said it was “sort of disappointing, but not surprising”.

“It is disappointing when you do a kick-arse interview and people don’t take away what came out of that, but they do think she didn’t have the normal [studio] make-up on,” she said.

After Karl Stefanovic was messily axed in December 2018, the accomplished journalist had jumped at the chance to make history with Georgie Gardner as Australia’s first all-female duo to co-host a national breakfast show..

Knight was also hosting some TV news shifts and taking part in shows on Radio 2GB.

She attracted harsh criticism from trolls that she was not spending enough time with her three children – Darcy, 11, Elsa, 9, and Audrey, 4.

“It was pretty tedious, and I was perplexed by it because I have plenty of male colleagues who work very hard and work multiple jobs and they have children too,” she said.

“They often have wives working as well and no-one ever says to them, ‘You work too hard’ or, ‘You should be spending more time with your children’. It was more the double standard I was annoyed by.

“I think I should be setting a strong example for my daughters by being successful and working hard because if you work hard, then that to me is the best example to set your kids.”

A media survivor, the 47-year-old knows how fickle the industry can be but wants to be around for a “long time not a short time”.

So she is also savvy enough to know it’s not good for one’s career to bag a male boss, or even an ex-male boss, like the one who unceremoniously sacked her at dinner when she was a prime-time newsreader at Network Ten. She had willingly accepted the invitation thinking it was to be a celebration after signing a new contract.

“I was absolutely gutted and I had only just come back from having my second baby – I had a big mortgage, financial commitments, young kids – and thought, ‘Wow, here we go, what’s going on here?’ So yeah, absolutely gutted,” she said.

“I was blindsided. I had no hint it was coming, I was completely shocked.

“I’d been with Channel 10 in many, many roles for many years – as their Canberra reporter covering federal elections, covering the September 11 attack as the US correspondent, hosting their flagship product, the 5:00pm bulletin in Sydney, [and worked on TV program] Meet the Press.

“[I] had done it all and I thought I had a great career going on here and, yeah, the rug was pulled out from under me.”

She said hindsight is “always a beautiful thing, but I think it was a really important lesson for me to learn that you do suffer setbacks”.

“I’d had lots of doors opening to me and not many doors closing and I hadn’t ever expected that if you were doing a job, and doing your job well, that you would suffer,” she said.

“What I keep with me every day as a result of that is that, really, you’re judged on how you bounce back, how you cope – and I did bounce back, in a better way. To this day I don’t take anything for granted as a result.”

Sacked for a second time

Her “bounce back” was with the Nine Network in 2011, when she took on roles with Weekend Today, Nine News Sydney, and eventually hosting the doomed all-female gig with Gardner last year.

Under intense pressure from day one, the duo were under constant attack for failing ratings. It led to both women being dumped, paving the way for Stefanovic’s return with new offsider Allison Langdon.

Happily now hosting her own radio show ‘Afternoons with Deborah Knight’ on radio 2GB and locally in Queensland on 4BC – she does not see her axing as a failure.

“I am a political junkie so I got to do every single political interview that came up on the Today Show, and you’re working with a great team of people,” she said.

“I actually really enjoyed my year, and I learned a lot and I sort of grew as a journalist during that 12 months. But I think there was a cheer squad that hoped we would fail, without a doubt, and we had a lot of unfair criticism.

“I just turned up every day doing the best job I could possibly do.

“People still often email me now I am on radio saying they don’t like me and that happens – it is part of the job.

“They can sniff a fake, though – they also know if your are acting as yourself, so I always try to be genuine.”

With the focus on gender equality and what women have achieved on the agenda this Sunday, Knight said young women should not shy away from entering the media. But she said women had to be tough enough to endure scrutiny.

“By its very nature, you open yourself up to scrutiny because you have to have opinions,” she said.

“People may not agree with your line of questioning and that is par for the course, so if you can’t cop the scrutiny, then perhaps it’s not a career for you.

“You have to try to develop a thick skin, which is always tough and learn to call it out.

“There are still times when people will make comments on social media about what I’m wearing or the fact that I look different because I don’t wear make-up.

“Wow what a revelation. I’ll call it out because it’s like, you just sort of say, ‘Well, can you take a look at the criticism you have just levelled at me? Because it is just silly’.

“You have to have a bit of a laugh about it too because the keyboard warriors – if you front them up – often will back down.”

Mentoring is the key

The journalist has earned the respect of women nationally for her strength and class during many challenging times.

She would like her legacy to be fostering a new generation of women and championing their cause.

“I had lots of great people mentor and foster me along the way and give suggestions on how to make their way in what can be a pretty fickle industry,” Knight said.

Knight wants to see more women in media management roles and urged women to be a “little kinder to each other”.

“I think we need to be secure enough in ourselves to support people and try and encourage others to do well, rather than act as a barrier,” she said.

“Find someone to support you and lift you up rather than knock you down.

“We are quite critical as women of other women, and this is disappointing – the whole sisterhood thing – we often let each other down.

“I am not alone in that, [ABC 730 host] Leigh Sales is a good friend of mine – she cops it too – she will conduct a great interview and people will comment on a blouse she is wearing.

“If we can only move past that it would be great – I guess that is my ultimate message be kind to each other.”