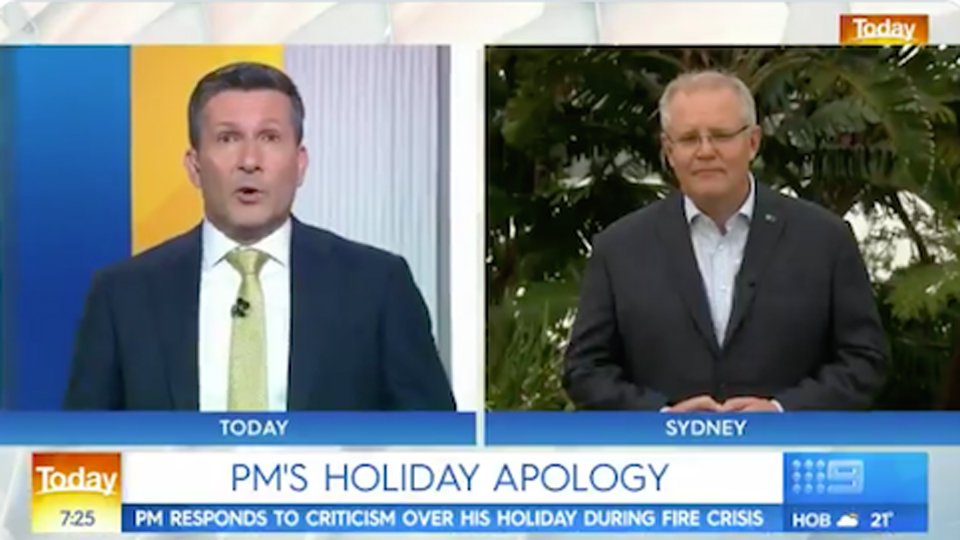 During an awkward live cross on Nine’s Today, Prime Minister Scott Morrison has assured Australians he “will follow the proper processes” if he decides to take another family holiday before the end of 2019.

But despite the storm of criticism sparked by his tropical getaway, Mr Morrison isn’t ruling out more time off.

“At the moment, if I get to take a few days with the family, I’ll always seek to do that,” he said.

The admission came during the discussion with Today’s fill-in host Jonathan Uptin, whose interviewing style veered between aggressive and docile.

As the spot – headlined ‘Burning questions’ – wrapped up, Nine’s Queensland weekend news host instructed Mr Morrison that if he does take another break, “make sure you will tell us as well, Prime Minister, won’t you?”

It was a jab about Mr Morrison’s failure to tell the public he was heading overseas last week.

For days his office would not reveal where he and wife Jenny and their two daughters were.

The PM told a Sydney press conference on Sunday he would make “different decisions” about Hawaii if he had his time again and has “deep regrets”.

He doubled down on the message again during the Today segment, which saw Uptin ask if Australians can trust their parliamentary leader’s instincts given he headed overseas as the bushfire crisis raged.

“Australians are very fair-minded people. They know that whether you are a Prime Minister or anyone else, you juggle the demands of family,” Mr Morrison said.

Saying the fires have been “going on for some time”, Mr Morrison reeled off a laundry list of bushfire-affected communities he has visited, including that of the two volunteer firefighters who died.

He said he was “pleased” he could “provide some comfort” to them “on behalf of Jenny and I”.

The Prime Minister joined us on The Today Show to answer some important questions Australia is asking. #9Today pic.twitter.com/CRiRbRfkPy

Uptin tried to skewer Mr Morrison, asking if he accepted the criticism his comments “missed the mark”.

Again, the PM said he was “very upfront” about it on Sunday: “I was very clear about my regrets.”

Asked if he is “embarrassed” at how his leadership is being seen globally, Mr Morrison said he would not be intimidated into changing the government’s climate change policies.

“I’ll set Australia’s policies consistent with what I took to the last election and what I believe and my government believes is in Australia’s national interests,” he said.

“We are acting now”, Mr Morrison replied, before claiming Australia’s emissions have fallen for the past two years.

“Of course, of course”, said Uptin, who then appeared to look for a way out:  “OK, we appreciate you’re a very busy man.”

The PM and the Today host were both criticised by viewers, with the interview labelled “embarrassing” and “pathetic” on Twitter.

“What is it, amateur hour?” tweeted one watcher, while another called Uptin a “moron” with “impertinent” questions.

Many tagged their tweets with the popular hashtag ‘This Is Not Journalism’.

“We can’t wait to tell you all the news, all the important stuff in the day, but send you off with a laugh,” Stefanovic said.

Scott Morrison may take another family holiday this year, despite Hawaii debacle