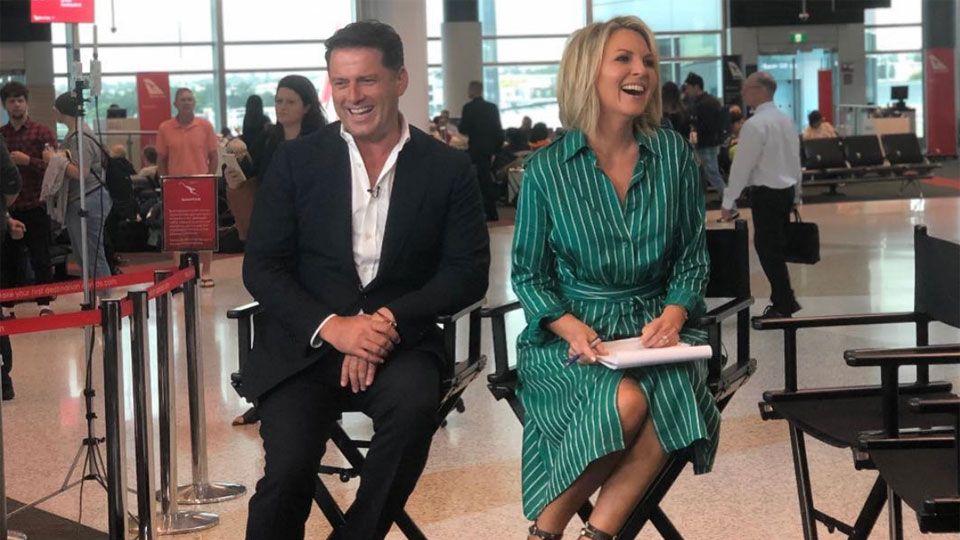 "One of the best mornings I've ever had on the Today show," posted Karl Stefanovic (with Georgie Gardner) last November. Photo: Instagram

Karl Stefanovic has launched defamation action against a newspaper and columnist he claims damaged his public standing.

Weeks before his return to Nine’s Today show and days after unconfirmed reports he and wife Jasmine Yarbrough are expecting their first baby, Stefanovic has signalled he’s had enough of negative publicity.

The breakfast TV host claims his reputation was “greatly injured” by a series of stories in The Sunday Telegraph suggesting he would take a pay cut to be reinstated to the Today show after his 2018 sacking.

Stefanovic is seeking unspecified damages, ­aggravated damages and for the online articles to be taken down.

According to a Thursday report in The Australian, which is published by Nationwide News, court documents state Stefanovic should be paid aggravated damages in part because of a November tweet written by Sharp.

“This Karl Stefanovic restoration really peeves me. Why are men allowed to fail in our society and women aren’t?” it read.

Stefanovic told The New Daily in June 2018 he was “so sick” of the “made-up bulls–t written about me”.

His life was portrayed as “like Mills and Boon,” he said.

Another day another cover from No idea. Just for the record the only thing broken in this photo was my serve. And I have years left on my contract. Ha. You guys rock!! X

The show had suffered a ratings plunge amid turmoil in Stefanovic’s personal life including a divorce from ex journalist Cassandra Thorburn and ‘Ubergate’, when he and brother Peter Stefanovic critiqued other Nine staff.

He was rehired in November with 60 Minutes’ Allison Langdon in a revamp of the Nine morning flagship that will launch in January.

The stories in The Sunday Telegraph and on its website in November claimed Stefanovic was prepared to take a pay cut of as much as $1 million to get his old job back.

Stefanovic’s statement of claim says the article falsely implied he “had so seriously breached the standards expected of him” by Nine that it caused the TV network to “dock him $1m in salary” under his contract, according to The Australian.

The court documents allege a second article headlined “Charm offensive brings Karl back to breakfast” falsely implied Stefanovic had “by devious self-promotion, duped a senior Nine executive into paying him a ludicrously high salary for the worst four years in the 38-year history of the Today show”.

According to the court filing, Stefanovic was described in the story as an “expert snake charmer” with “the gift of the gab with men in power”.

It said he had “once again whispered into the ear of a CEO and promised without proof of evidence something he is yet to deliver to Nine, a sustained ratings win”.

The claim also relates to two similar online stories, which Stefanovic claims have also injured his business, personal and professional reputation and brought him into public disrepute, ridicule and contempt.

A directions hearing will be held on February 11 at the Federal Court.

Nine declined to comment to The New Daily and Stefanovic’s manager Sharon Finnigan did not respond to an inquiry.