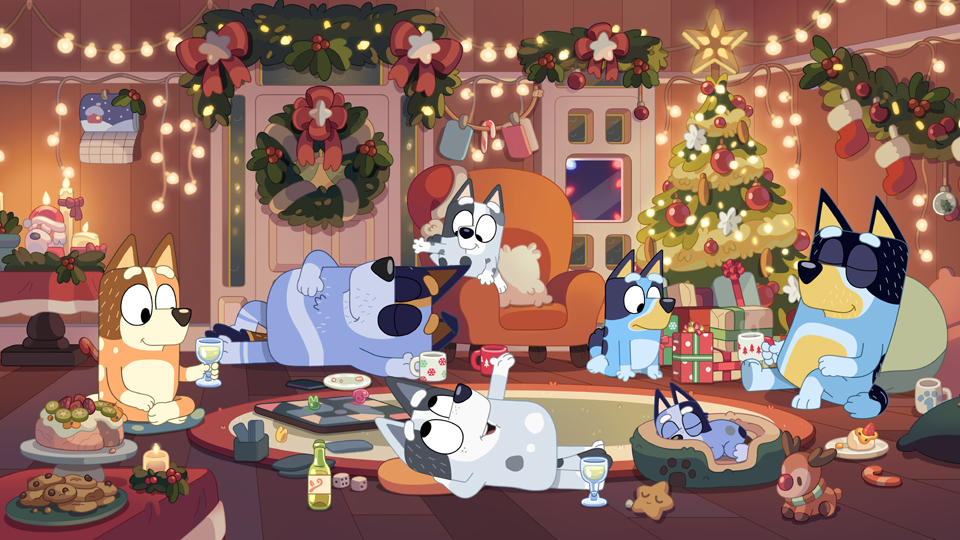 Bluey has a special festive present for fans: a Christmas episode. Photo: ABC

Every time Joe Brumm sits down to make an episode of Bluey, the wildly popular animated kids’ TV series smashing Australian records, he makes sure there will be nothing for children to learn.

“I set out to make kids laugh,” the Bluey creator told The New Daily.

“I didn’t want to try and teach anyone anything. It’s about me showing my experience as a parent.

“You can learn how beautiful play is if you want, but you don’t have to. Just laugh with your kid at a pony taking a dump. That’s a good outcome for me.”

Pony poos have translated into a booming business for Brumm and his team.

Since its premiere on ABC Kids in October 2018, Bluey – about the playing antics of two Blue Heeler sisters called Bluey and Bingo and their hands-on parents Bandit and Chilli – has fetched more downloads on ABC’s iview than any other TV series (150 million and rising).

The show has been picked up by Disney in the US (for the Disney Channel and Disney+), broadcasts in the UK and New Zealand and is set to screen in China (in Mandarin).

It has been nominated for an International Emmy Kids Award and an AACTA and has inspired a heap of merchandise – DVDs, books, plush toys – to flood stores in time for Christmas.

That phenomenal success was no accident.

Brumm, who spent 10 years working as an animator in London, including on the beloved British show Charlie and Lola, wanted to create a series geared toward four to six-year-olds and the sort of play they love to engage in.

In Bluey, which was commissioned by the ABC and the BBC on the strength of a pilot episode, the kids engage in unstructured, imaginative play, while their surrender-to-the-moment folks are recruited as participants or props.

Before he started writing the series, which is produced by Ludo Studio in Brisbane, Brumm hit the books.

“My focus was socio-dramatic play,” said the 41-year-old, who lives in Brisbane with his wife and two young daughters (but no dog yet).

“Finding out why the kids play in this way, what they are getting from it and what happens if it’s missing or truncated was a good centre point to learn some of the basic psychology of it.”

He cites two experts who formed the basis of his research: The late renowned psychology researcher Sara Smilansky, who wrote Facilitating Play (1990). And Vivian Paley, an American kindergarten teacher and early childhood education researcher, who died this year.

Children’s play “is so intertwined with the social and emotional phase of the 4 to 6 year olds’ development and it’s just so much fun to read about, observe and write stories about,” Brumm said.

“If Bluey does have a point outside of making kids laugh, it’s to show us parents what kids learn while they play in this way. Hopefully this will encourage us to ring fence it for them.”

Creating the characters and choosing the setting were easy for the show’s producers: They wrote what they knew.

Like Brumm, executive producer Charlie Aspinwall has two daughters, and this served as the inspiration for having girl siblings.

The locale – and wildlife and weather – is inspired by Brisbane, where the production crew lives.

Even the voices of the kids are played by those close to the filmmakers.

“Bluey, Bingo and some of their friends are voiced by children of the production crew,” Brumm said.

As for the grown-up Blue Heelers, Bandit is voiced by Dave McCormack, frontman of Brisbane indie rockers Custard.

Brumm and the 50-strong team at Ludo are now creating Bluey’s second season, which is due to air in the second half of 2020.

And in March, he will head to Cannes to attend the International Emmys.

Is that something that blows his mind, just a year after getting his dogs on the screen?

“I knew I could make something worth watching, otherwise I wouldn’t have taken the risk to do it.

“But it’s been a big leap between making something watchable and breaking iview records.”

Watch Verandah Santa, a new Christmas episode of Bluey, on December 12 at 6.20pm (or 6am on iview)