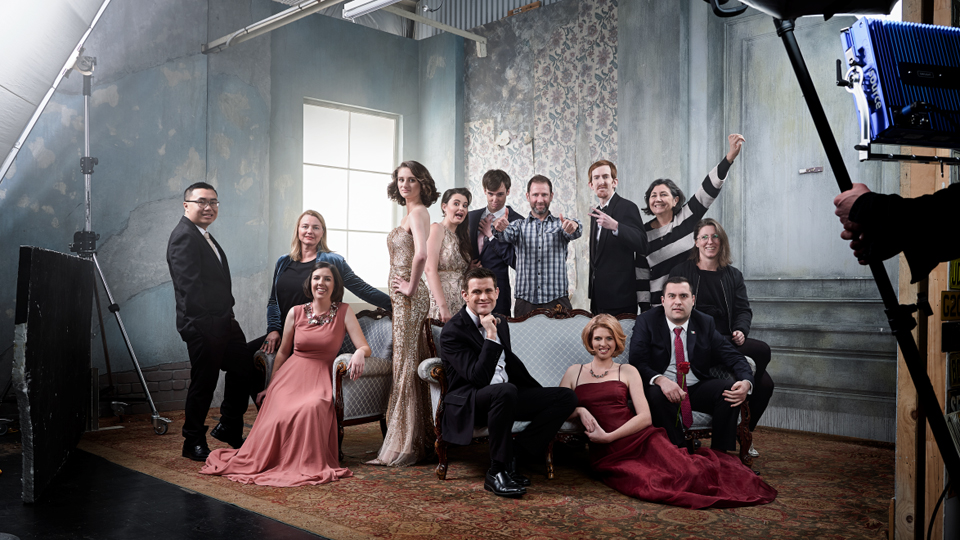 The cast of the ABC's Love on the Spectrum with director Cian O'Clery in the middle. Photo: ABC

Ruth and Thomas are like any engaged couple about to celebrate their fourth anniversary together.

Clearly besotted, they comically niggle each other.

The only difference from the majority of Australians is that they are both on the autism spectrum, and Ruth is also deaf.

The pair, who don’t want their last names used for privacy reasons, are participants in Love on the Spectrum, the beautiful new ABC TV show from the makers of multi-award-winning hit Employable Me.

It also showcases hard-won success stories like that of Ruth, 22, and Thomas, 25.

“I think it’s really bizarre people think people with autism can’t love,” bus driver Thomas tells The New Daily over the phone from the Brisbane home he shares with Ruth.

“Love doesn’t have to look like it does on The Bachelor. A date can be very silly, and a relationship can be done differently.”

Ruth says they were keen to take part to show other young autistic adults that love is possible.

“When I was growing up, couples were pairing off in school, and I wished that would happen to me,” she says.

“I thought maybe there was something wrong with me, something unlovable.”

Seeing people like her on a TV show like Love on the Spectrum would have made her school days happier, back when it was difficult enough making friends, says Ruth.

She argues The Bachelor and Love Island’s narrow definition of who deserves love is problematic: “Neuro-typical and able-bodied ideals are often portrayed as perfection, and of course they’re not.”

Thomas was also lonely at school.

“I tried my absolute best, unsuccessfully, and was pretty desperate for a romantic relationship, just for that connection,” he says.

“I tried so many times with so many poor girls, and in the end the persistence paid off.

“I found a pretty all right one. She dumped me pretty quickly, but then I met Ruth soon afterwards, so that was fine,” Thomas says.

The first episode of the four-part series, produced by Northern Pictures, introduces us to the empowered Chloe, who suspects women are a better fit for her than men, and Michael, who has never been on a date, but is cheered on by his tight-knit family.

As his sister says, she’s not on the spectrum and struggles enough finding love.

Director and producer Cian O’Clery wanted to show a broader range of experience on the show.

“Hopefully it allows you to get to know different types of people and realise that it’s a really diverse spectrum, and not to make any assumptions,” he says.

Part of the problem, O’Clery suggests, is that awareness around autism has only picked up recently, and has been even more sluggish for girls.

“When you speak to families whose kids are in their twenties, when they were babies, there was very little understanding,” he says.

“When we were making Employable Me, we started hearing about the lack of support in the world of dating and relationships.

“It just felt quite strange, given there’s so much support in other areas.”

What representation there is of autism on our screens is often quite limited, he says.

“You have The Good Doctor and Sheldon from The Big Bang Theory, and for a lot of people I’ve spoken to, it can actually be a bit of a hindrance to them that these are the characters society latched on to.”

Love on the Spectrum aims to broaden the picture.

“Pretty much all, bar one, of the single people we follow in the series had never been on a date in their entire life, which is crazy,” O’Clery says.

“It’s not fair. Getting to know these unique people really opens your eyes to the world of difference out there.”

Love on the Spectrum debuts at 8.30pm on Tuesday, November 19 on ABC TV and iView

Love on the Spectrum: The gorgeous show making The Bachelor look boring