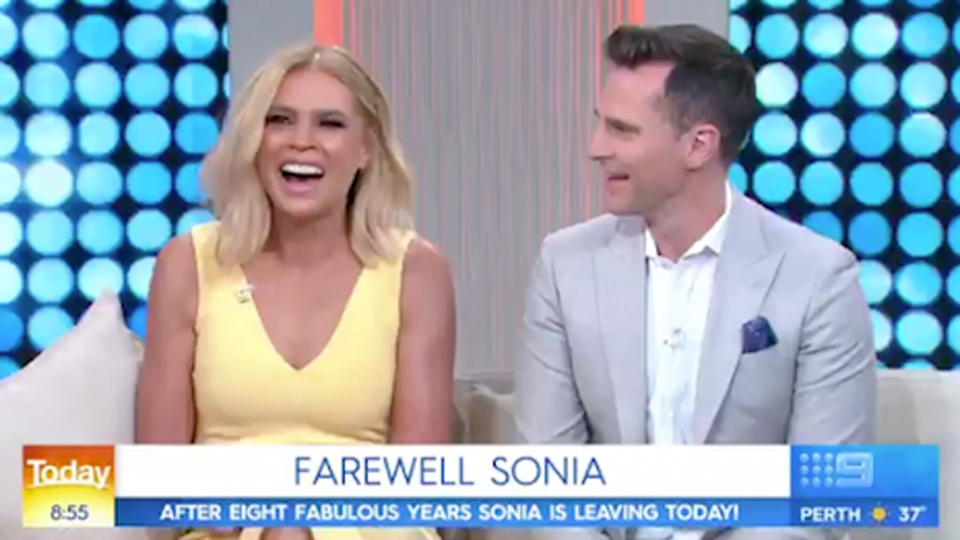 Nine’sToday show lost two of its on-air team on Friday and the farewells were a masterclass in diversity.

Sonia Kruger got razzle-dazzle, a five-minute package and promise of champagne. Tony Jones “got the arse”, as he put it.

Let’s start with Jones, sports presenter on Today, who made headlines last week when he had a crack at his colleagues in a salty live cross from Sandown Racecourse.

The Melbourne reporter didn’t even make it on set for his final hit out on the breakfast show but had lost none of his doughty spirit while appearing via video link.

He had cavoodle Archie, the source of angst a week ago when Deb Knight asked about him (“We’re at a racetrack, probably not a great idea to bring the dog”) as his wingman.

Initially Jones addressed his parting comments to the dog.

“Archie, it’s not a great morning. You should have just stayed in bed with mum, shouldn’t you, mate?

“The good news is, Archie has a new two-year contract. I got the arse. It’s all going very, very well.”

Interviewing boxer Danny Green in a boxing ring during another cross, Jones mimicked exhaustion while referenced Today’s year, which has brought plunging ratings and now the triumphant return of Karl Stefanovic.

He seemed to refer to his scathing treatment last week of Georgie Gardner – who didn’t return to the chair after her reported nemesis Stefanovic was handed back his job on November 9 – Knight and Tom Steinfort.

“It’s been a long year. Let me tell you. I feel like I’ve gone 15 rounds,” said Jones, who has juggled his Today commitments with Nine’s nightly news bulletin and radio gigs.

“I’m on the ropes, and despite what they say, I’m in your corner.”

Good to see Tony Jones is as happy as ever as he embarks on his final morning on ⁦@TheTodayShow⁩ pic.twitter.com/BirdgfXYwF

During his next cross, a nothing-to-lose Jones was asked by entertainment reporter Brooke Boney if he was drunk: “Look at you, the way you’re standing.”

Jones whacked that one away for four, imagining how Boney’s question could be reimagined in headlines.

“I can see it now. One last awkward moment as Brooke quizzes surly sports reporter, ‘Are you drunk?’. Anyway.”

The presenter’s swing from tired to jazzy impressed his colleagues, who told him his year with them “has been rich, it has been real”.

Knight said while Jones is “one of those people” who made her have her heart in her mouth during a cross “because where is Tony going with this”, he is “just about the best live TV performer in Australia.

“A lot better than me. I can’t get the words out.”

Jones got in one last signature dig, promising he is “not completely” leaving Today: “Obviously I’ll bob up from time to time when there is about eight people calling in sick next year.”

Jones’ swan song was not immediately posted to social media by Nine, but it was a different story with Kruger, who announced on air on Thursday that she’s leaving the network after nearly eight years.

Speculation is that she will return to former employer Seven, which has bought the rights to Big Brother – formerly hosted by Kruger – for 2020.

Her farewell saw Knight dish out a cuddle as Kruger talked her hits and memories, including Richard Wilkins cowering at her feet during a motorbike stunt.

“I am in full denial and I am smiling through my pain today,” said her Today Extra co-host David Campbell.

Promised Knight, “We will deliver.”

It has been reported Kruger has signed a “seven-figure” deal to return to Seven.