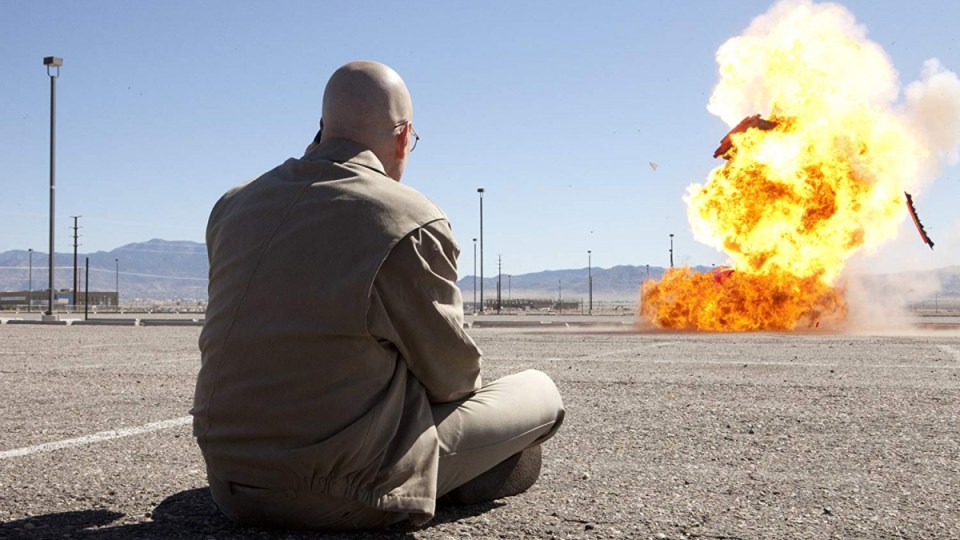 There's a lot of "What?!" moments throughout Breaking Bad's 60-something episodes. But these three are the most shocking. Photo: Sony Pictures Television

The release of El Camino: A Breaking Bad Movie on Netflix serves as yet another reminder of what watershed television the 2008-2013 series was.

Not that there’s anything wrong with El Camino – it’s involving, if not compelling, and certainly provides more hope for Jesse’s (Aaron Paul) eventual escape from violence and addiction than the series finale, Felina, did.

But doing nothing much wrong isn’t the most compelling argument for a film’s existence.

What El Camino does do is call to mind the visceral, shocking moments that inhabited Breaking Bad’s 62 episodes.

Limiting these to a standout trio is a fool’s errand, as Breaking Bad had so many electrifying sequences readers will seethe at the exclusions.

But here are the three scenes that I found the most unforgettably disturbing.

Gustavo Fring (Giancarlo Esposito) had proven to be Walter White’s (Bryan Cranston) most lethal opponent/employer of them all and was too deliberate and cautious to allow Walt to catch him off guard and turn the tables.

Enter the Ancient Greek concept of the tragic flaw: Gus had one habit that exposed him. He regularly visited his old drug-running rival and stroke victim Hector Salamanca (Mark Margolis) in his hospice to spend an hour tormenting him.

That was all Walt needed. Hector, although incapable of communication outside ringing a bell with his forefinger, proved an eager co-conspirator.

Hector rang his bell, Gus realised too late that it was rigged to a pipe bomb and two sadistic felons were obliterated in the explosion for the price of one.

Although not immediately in Gus’s case: composed to the end, he emerged from the wreckage, calmly adjusted his tie and revealed half his face was missing before dropping dead.

Breaking Bad’s most memorable death was also its most satisfying.

By the final series we started to suspect that as Walt grew in confidence swimming alongside the rogues’ gallery of traffickers, murderers, dealers and users inhabiting his world, he was no longer acting out of necessity.

This was confirmed when Walt blunts the threatening ambitions of middle-ranking drug hoodlum Declan with this big reveal:

Declan: Who the hell are you?

Walt: You all know exactly who I am. Say my name.

The admission was a glorious metamorphosis for Walt.

Essentially, he had beaten his cancer by substituting it with his new identity as a drug kingpin.

Say My Name predicted Walter’s confession to Skylar at the series’ conclusion that he hadn’t turned to crime to help her and Walt Jr: He processed meth and killed people because he enjoyed it and was good at it.

What made Todd (Jesse Plemons) the most terrifying of Uncle Jack’s hillbilly myrmidons was his dispassionate approach to his craft.

We knew this already when Todd murdered a boy on a bike who chanced upon the gang’s operations in the desert.

His clinical execution of Jesse’s girlfriend Andrea (Emily Rios) as a salutary lesson to the watching but immobilised Jesse was shocking, but to Jesse it eventually proved galvanising as well.

It was fitting that as the carnage went down in the final episode Jesse managed to weave a path through the gunfire to strangle Todd with the chains used to torture him.

Like Jane’s overdose in season 2, Andrea’s death was on Jesse and the guilt all but destroyed him.

But Todd’s most distinctive characteristic, and what made him most useful to Jack, was his complete lack of a moral compass – he couldn’t feel guilt.

It’s completely fitting then that these two sides of the drug-dealing coin were reunited through flashback in El Camino, where Todd managed to squeeze in yet another cold-bloodedly transactional murder.

As I said in beginning, this list is by its very nature ridiculously incomplete. But honourable mention should also go to:

As we settle in for El Camino, nothing will ever compare to these Breaking Bad moments