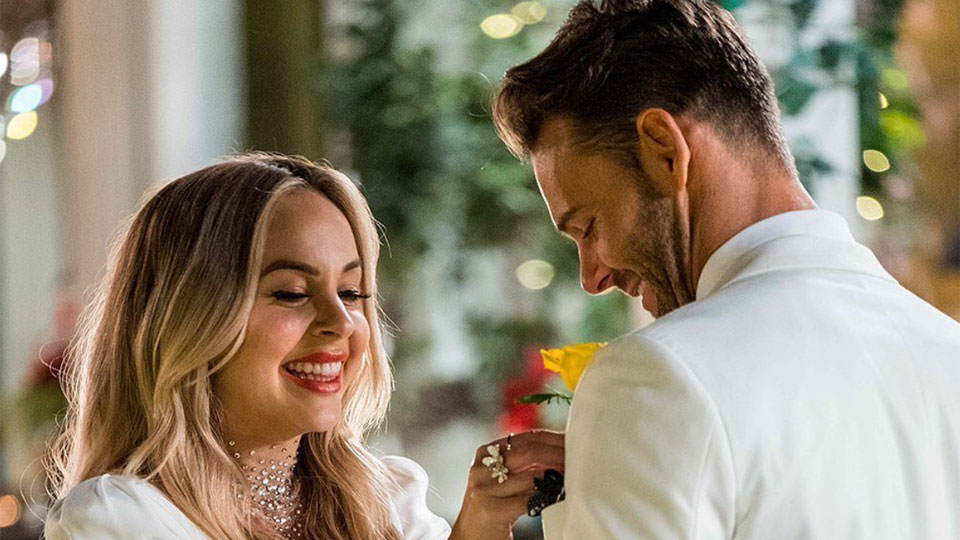 Angie Kent chooses Carlin for a 24-hour date on the first episode of The Bachelorette. Photo: Instagram

And just like that, with one episode starring Angie Kent, Ten’s The Bachelorette franchise is back on track after last year’s Ali Outjen train wreck.

And as she said in singsong manner in her opening spiel, an “inappropriate bachelorette”. Perfect.

That said, there were a couple of worrying signs that Angie’s caustic candidness might be reined in for her new role.

The first three minutes of her intro were laden with stereotypes  – cliches about “someone who loves me for me”, backlit yoga poses and sequinned evening gowns – but her “mad” personality pulled it back.

She caned all other previous bachelorettes including 2017’s Sophie Monk, whose breakout turn revived her dead duck career and has taken her all the way to super trash extravaganza Love Island.

That reality romance show is also back this week, with its wall-to-wall fake tans, G-string bikinis worn with heels, and lobotomy conversations drawing just 357,000 five-city metro viewers on Tuesday.

Where Monk’s signature is her bogan straight shooting – that accent is getting more pronounced by the way, Soph – Kent’s modern urbanity makes her a smarter, wittier and zingier version.

Those qualities were sorely tested in the face of a stream of 20 men who seemed oddly lacking in humour, the one quality Angie said she wanted.

She was most moved when her brother Brad showed up as undercover agent ‘Mark’ to check out the blokes.

Neat stitch up, although not sure why he was outed in the first episode.

During the premiere, a stream of gifts including a meat pie (Angie is a coeliac vegetarian) and beer stubby were presented. All that was missing was an organ grinder’s monkey.

Timm – no typo – and his sunflowers were a “sign from the universe” according to Angie, although the man needs to pronounce Angie as Angie, not Engie, and speak in full sentences.

There was serenader Carlin in a white dinner jacket who looked like a proper grown up who would use deodorant, and firefighter Jamie in overalls carrying a puppy.

“You’ve got muscles and you’ve got a dog,” said Angie, grabbing the dog. “Do you want the rose?”

We know Jamie won’t get it because he’s the mandatory stage-five clinger who cried before the rose ceremony when he thought someone said mean things.

Neither will the Zac Efron lookalike or the “sexual Willy Wonka” in sockless loafers.

Anyway, you know the drill: Angie met a heap of men, most patently unsuitable, some wacky and maybe one or two who could work a cheese platter, and chopper rides work their magic.

The creepiest was Noosa councillor Jess who wore a plush mayoral robe, carried a throne and gave Angie – who he kept calling “my girl” or “darling” – the key to his house and a load of cheap compliments.

Jess is ready to make Angie the Queen of Noosa. Do you think Angie's ready to take the throne? #BacheloretteAU pic.twitter.com/BUa2wI5yPE

“I think he’s already in love with Noosa and they’re married but he’s just having a break with her,” she said.

That she didn’t send him packing is proof Angie, for all her honesty, is still a puppet of producers who need a villain.

Word is The Bachelorette star does find love during the series but said on October 7 she’s “not big on marriage or having babies”, just love.

“If my partner wanted to have that, I’ll think about it. I kind of let the universe decide.”

“It may fast-track family plans if the romance lasts,” she said.

But a complicating factor is that Kent has endometriosis, which can create fertility problems.

“It is one of those things I will have to think about earlier rather than later because it will make things quite hard for me later down the track to fall pregnant,” she said.

Fingers crossed the firefighter can’t pull himself together, Timm keeps talking in platitudes and saying love is “sick”, and something interesting happens apart from Angie’s one liners.