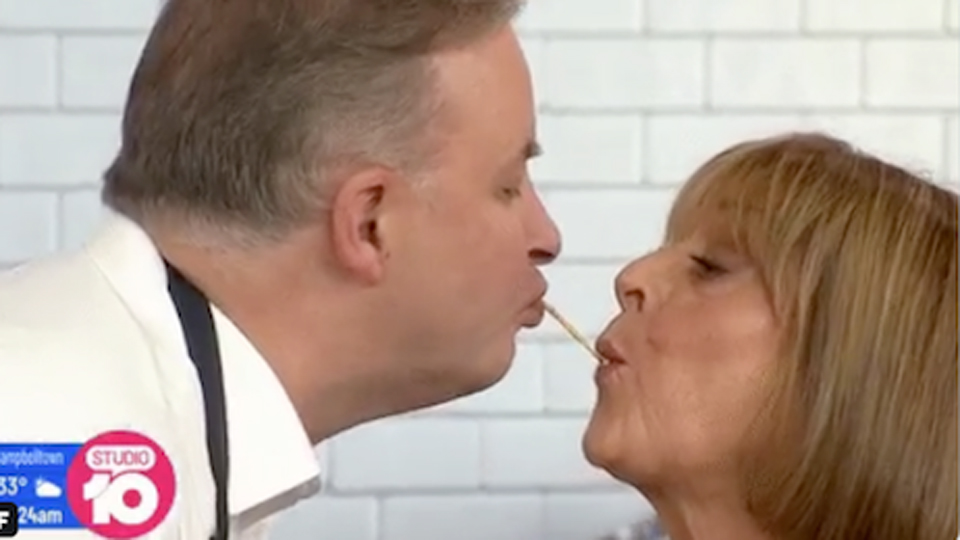 Anthony Albanese was aiming to win hearts when he appeared as guest host on Studio 10 on Friday, but took the romance thing further than expected by kissing show regular Denise Drysdale.

The surprise show of affection came as the opposition leader showcased his Italian culinary heritage and made pasta and sauce from scratch with ‘Ding Dong’ and Merrick Watts.

“It wasn’t something I briefed him to do,” a spokesman for Mr Albanese told The New Daily.

“It was a spur of the moment thing and he went along with it.”

Drysdale was deeply unperturbed by her part in ‘Kissgate’, telling The New Daily the opposition leader “has very soft lips”.

Added the four-time Logie winner, “anything for a bit of fun on the telly.”

Viewers didn’t take it so lightly. On social media some upbraided Mr Albanese for not having anything better to do, others welcomed his jaunty show of personality.

“Resign now Albo. Disgrace,” said one on Twitter. “All he’s missing is the ridiculous Akubra,” noted another. “Yeah, I don’t see how this vision can be used in a positive way,” wrote a third.

“This is not someone who instils confidence in me … you’re the leader of the opposition, not a C grade TV show guest,” one tweeted of Mr Albanese.

Another Twitter user kept it simple: “No, please stop.”

More of that later, but first let’s go to the video tape and see how the kitchen pash unfolded.

Mr Albanese didn’t look totally comfortable during the cooking but really brought the heat when it was time to dish up the steaming pasta.

When Drysdale picked up a strand of spaghetti, she told the politician to put the one end in her mouth while she took the other.

In a re-enactment of the hot date scene from Disney’s Lady and the Tramp, the couple nibbled away bit by bit at the pasta until it seemed they would surely pull away.

The suspense was palpable.

But, and that’s amore, Mr Albanese leaned towards ‘Ding Dong’ and planted a quick kiss on her lips.

One viewer likened the moment to a “train crash”:

You be the judge:

When asked if Mr Albanese planned to pash Drysdale on national TV, his spokesman replied, “I don’t think he pashed her. He didn’t expect that was coming.”

Given the “nature of the program” is “a bit of fun”, Mr Albanese followed Drysdale’s cue: “She put it in her mouth and that was it.”

Mr Albanese “grew up” watching Drysdale as Ernie Sigley’s barrel girl on variety TV shows, “so that’s the kind of context” of familiarity he has with her, the spokesman said.

After the lip lock, Mr Albanese doubled down with a hug.

Maybe, but as has already been noted, viewers weren’t so sure it was a good political move.

“And the planet burns,” noted one. “She didn’t do that with Shorten. Understandably,” said another.

A small minority of those who took to social media gave Mr Albanese props.

Former prime minister Kevin Rudd’s name came up again during a suggestion that wooing Studio 10 regulars with food was unoriginal. 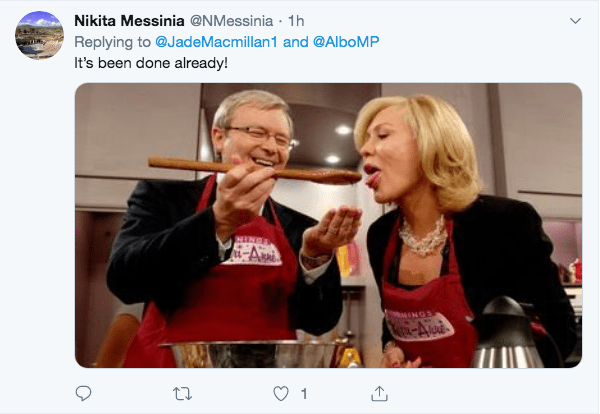 When Mr Albanese noted after the kiss that the pasta tasted “pretty good”, Drysdale asked if he wanted to “go again.”