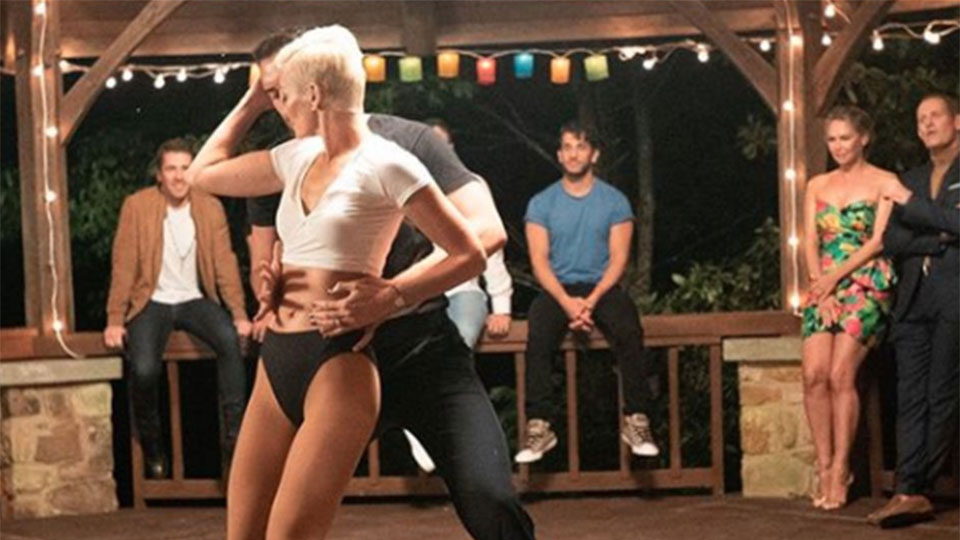 Jessica Rowe and her The Real Dirty Dancing co-stars had the jazz hands but not the fans. Photo: Instagram

“That’s not a great result. Let’s say it did OK up against stiff competition,” TV Blackbox’s Robert McKnight tells The New Daily.

The disappointment came after Seven had a fabulous start to the week.

Its event offering The All New Monty Ladies’ Night was the No.1 show in the country with 1.031 million metro viewers.

Then the network lost traction with the premiere of its four-part dance show.

‘Get her UP!!’ and ‘just DANCE Jess!’ 🙀😹struggling to keep up with the ultimate Freestyler @firazzle !! 💫💫Boy did we laugh, and talk, and talk and talk!!! 😻😻😻 Next Monday all will be revealed on the #realdirtydancing #getherup #justdancejess #freestyler

Its dead-in-the-water performance is a contrast to the current standing of reality TV shows on other networks.

The Block is still a ratings juggernaut over at Nine, duking it out with Ten’s kooky whodunnit talent show The Masked Singer.

That was the No.1 entertainment show on Monday with 1.063 million metro viewers for its Nikki Webster reveal.

Ten already had reality runs on the board with the solid success of The Bachelor, MasterChef and Australian Survivor.

The ABC also had a reality hit in September with its five-part Old People’s Home for 4 Year Olds, which captured audiences’ imaginations with its simplicity and honesty.

But another genre is in trouble: Local drama.

The revamped Seachange wasn’t a huge hit for Nine.

“I just don’t think there’s an appetite for it in this market. With reality TV  there are many different styles, but Australian drama is all a little big same samey, all about family situations.”

So in a time when local drama is struggling, and news and reality rule supreme, what is Seven doing wrong that Nine and Ten are doing right?

Media analyst Steve Allen from Fusion Strategy traces it back to when David Leckie became Seven’s chief executive in 2003 and the network first got into reality with documentary-style shows like Border Security.

“They rated their tits off … and so the money flowed,” Mr Allen told The New Daily.

When Tim Worner took over as boss in 2013, nothing much changed in terms of offerings.

“When I first came across Tim he was in programming – we worked together on the launch of Better Homes and Gardens,” Mr Allen said.

“I wonder whether Tim ever really embraced or understood popular reality, as opposed to documentary reality.

“I think whilst there must be some other people at Seven who do, they just don’t have a handle on it the way Nine and Ten do.”

“They have the oldest leaning audience, particularly since Nine started to do much better targeting with its shows like Married at First Sight.

“Nine has reinvented itself and has very rich demographics on the big shows it’s launched. The audiences for their hits aren’t 50 plus.”

The question is, what will Seven’s new chief executive James Warburton do to turn the ship around?

The New Daily has made multiple requests to speak with Mr Warburton about his programming vision, which may be revealed at Seven’s upcoming ‘upfronts’ to debut its slate of 2020 shows.

“I don’t know how much programming talent he has, but there is no question that is what he has to fix,” Mr Allen said.

“Seven has to find some original talent and concepts and put them together really well.”