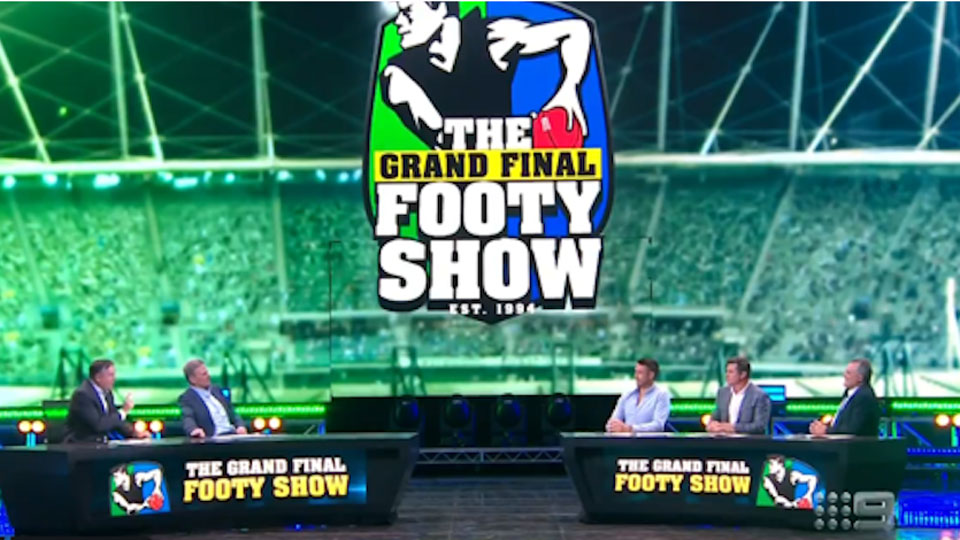 Nine pulled the plug on a revamped version of the 25-year old show in May when it proved a ratings flop that attracted just 53,000 viewers.

But while the grand final return was pegged as a razzle-dazzle walk down memory lane, some fans found the old gags weren’t as funny decades on.

“I love Eddie but I hate to say The Footy Show is a disjointed mess,” tweeted viewer Margaret Jones.

“Can’t believe some of the rubbish shown as ‘highlights’. Terrible.”

Wrote another, “It’s a shame. When the panel is laughing more than the crowd your jokes are no longer relevant.”

The show scraped into day’s top 20, drawing 420,000 viewers and being beaten by shows including the ABC’s Hard Quiz, Seven’s The Chase and Ten’s Bondi Rescue.

Given it was event TV with curiosity value built around a major sporting event, that was hardly a ringing endorsement.

The problems started early when laryngitis meant former co-host Rebecca Maddern had to pull out of her planned shared front-of-house duties.

That left Eddie McGuire and Sam Newman – who made headlines this week for slamming teenage climate-change campaigner Greta Thunberg as a “brat” – to carry proceedings.

Maddern, reportedly hospitalised on Tuesday, was reduced to holding up a sign instead of taking an active role that had been slated to include a “very romantic” Grease duet with Newman.

But despite the disparagement, other viewers felt the show kicked goals.

Amid Newman standards – hot air and a stroll down Swan Street in Richmond to drum up support for Greater Western Sydney this Saturday – there were some newsy snippets.

Former Carlton player Dale Thomas admitted the door is “ajar” for a return and Essendon’s Anthony McDonald-Tipungwuti talked the emotion of taking his adoptive mother to the Brownlow Medal.

There were tone deaf moments, with McGuire giving an on-air shout out to Collingwood forward Jaidyn Stephenson, who in June was handed a 22-week ban for betting on his team’s games.

“Jaidyn Stephenson, he might give us a multi, what do you reckon?” McGuire said.

“You’ve gotta laugh at these things!”

Trevor Marmalade, whose 15-year stint behind the bar on The Footy Show ended in 2008, also came in for some stick on his return.

One viewer tweeted he was “morphing into Rodney Dangerfield” and another said his “stand-up routine proved why he fails to get a gig these days”.

Meanwhile, the season premiere of ABC’s advertising-based panel show Gruen ran into problems of its own when the audio and visuals were noticeably out of synch.

Anxious fans took to social media to ask whether they should adjust their sets, while others slammed the broadcaster as “amateur hour” and “lousy.”

What's going on at @ABCTV? A few weeks ago they run the wrong ep of #MadAsHell; tonight #Gruen was out of sync.

#Gruen out of sync. Turning off. If I want to watch people’s mouths moving with little relation to the words I’ll watch @ScottMorrisonMP

The Gruen team, headed by Wil Anderson, said on Tuesday it was “pretty disappointed” with the glitch.

“After 11 years roasting brands for their stuff-ups, we’ve had one of our own. Serves us right,” said an apologetic statement released on social media.

“As with every blunder, it’s best when there’s something to blame. In this case: it was a dodgy machine at the ABC.

“But we probably shouldn’t bite the hand that feeds us or next season our panelists will be forced to sing and dance in masks.”