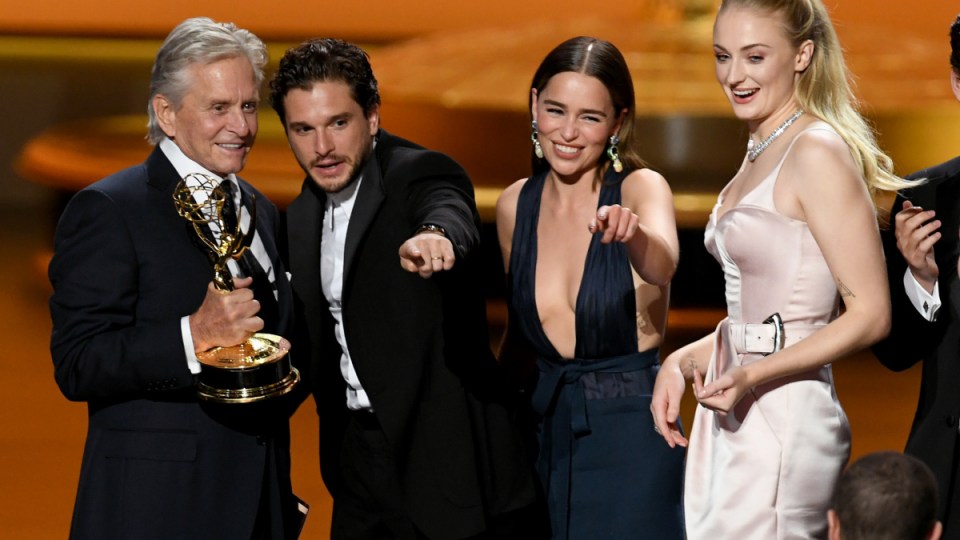 The final series of Game of Thrones divided fans and critics, but in the end won victory by felling tight competition to bag outstanding drama series – the very last award of the night – at the 71st annual Prime Time Emmy Awards.

Still, the ceremony belonged to Fleabag and creator Phoebe Waller-Bridge. The Emmys newcomer netted six wins in a surprise sweep that overshadowed the final victory lap of Veep as best comedy series.

“This is just getting ridiculous,” Waller-Bridge, said accepting her third award.

“Fleabag started as a one-woman show at the Edinburgh festival in 2014, and the journey has been absolutely mental to get here.”

"This is just getting ridiculous." Phoebe Waller-Bridge recalls the "absolutely mental" journey of #Fleabag in her acceptance speech for best comedy series https://t.co/WmT1Fmyol4 #Emmys pic.twitter.com/g7d7HYBrAF

Game of Thrones went into the show on Monday (Australian time) with a history-making 32 swan song nominations and 57 wins over a decade.

“These last 10 years have been the best years of our lives,” said co-producer David Benioff when GoT was finally called.

“For everyone who worked with us on it, I can’t believe we finished it.

“We did it all together. It’s over, and we shall never see her like again.”

For all the best and worst red-carpet looks, click here

The ultimate triumph looked shaky for the TV epic when Ozarks director Jason Bateman beat out three GoT episodes to win for directing a drama series.

Congratulations to the cast and crew of Game of Thrones for winning Outstanding Drama Series! 🎊

First time nominee Jodie Comer beat out Emilia Clarke and her Killing Eve co-star Sandra Oh for best actress in a drama, shouting out to her “mum and dad in Liverpool who I didn’t invite because I didn’t think this was going to be my time.”

Billy Porter, the Broadway star, pop singer and actor who appears on Ryan Murphy’s groundbreaking Pose, made history as the first openly gay man to claim lead actor in a drama honours.

“I am so overwhelmed and so overjoyed to have lived long enough to see this day,” said an ecstatic Porter.

Before overshadowing Veep, Waller-Bridge won the Emmy for writing for a comedy series – which elicited the huge applause from the A-list audience – followed by a win for outstanding lead actress in a comedy series, which drew gasps.

The upset victory robbed Julia Louis-Dreyfus the chance of going seven-for-seven as Veep’s Selina Meyer and snatched away her opportunity at besting Cloris Leachman for most Emmy wins of all time.

“No! Oh my God, no!” said Waller-Bridge who was also nominated as creator of Killing Eve.

The male comedy acting categories went more according to script, with Barry’s Bill Hader winning for the second consecutive and Tony Shaloub winning his fourth Emmy for his supporting role in The Marvelous Mrs Maisel.

Maisel’s best-supporting actress Alex Borstein delivered one of the most inspiring Emmys moments.

After taking a swig from a flask and cracking a joke about not wearing undies (“It looks pretty on TV, but it’s like a hot Bikram yoga class in here”), Borstein evoked her grandmother’s Holocaust experience.

“My grandmother turned toward a guard – she was in line to be shot into a pit – and said, ‘‘What happens if I step out of line?’’ And he said, ‘‘I don’t have the heart to shoot you, but somebody will.’’’

“Step out of line, ladies!” @AlexBorstein‘s rallying cry for women, as she pays tribute to her Holocaust-surviving grandmother in her #Emmys2019 acceptance speech. pic.twitter.com/K48bqkxk2D

“I see this as an acknowledgement of what is possible when a woman is trusted to discern her own needs, feels safe enough to voice them and respected enough that they’ll be heard,” she said.

Emmys 2019: Game of Thrones doesn’t rule but bows out on a high