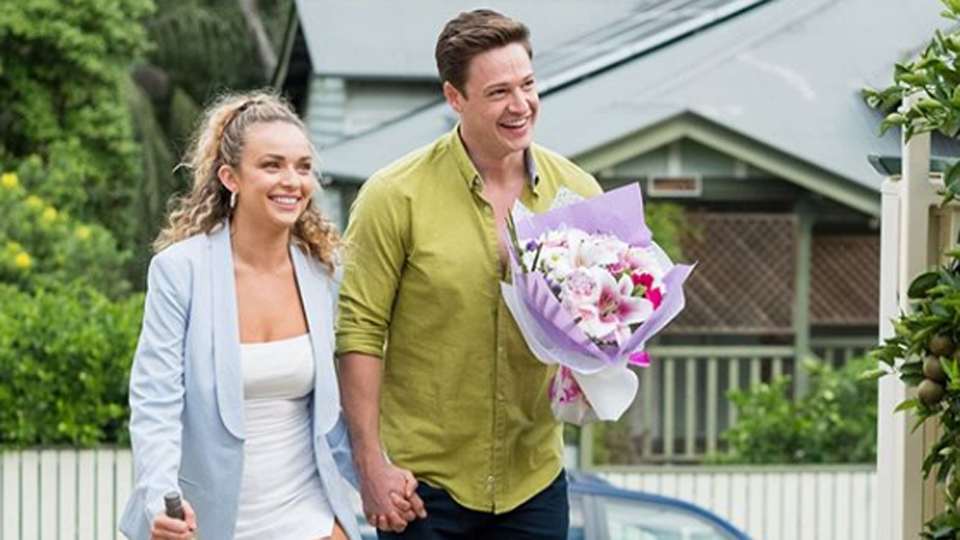 Abbie Chatfield takes Matt Agnew to meet her parents on The Bachelor before she was runner up in the finale. Photo: Instagram

The Bachelor’s rejected finalist Abbie Chatfield sobbed on Studio 10 on Friday, saying the fallout from her reality TV experience has been “really difficult.”

Brisbane property analyst Abbie, 23, was icily composed in her final scene on the Ten hit on Thursday night after astrophysicist Matt Agnew revealed he was in love with chemical engineer Chelsie McLeod.

“Get me the f–k away from him,” she said, retreating through the South African bush to a waiting car.

“I feel fine. I couldn’t even cry if I tried right now,” she said, saying “maybe” she never loved Matt despite telling him she did.

“I’ll get over this before it even airs. I’m just embarrassed.”

Matt’s decision was the most watched TV moment of the night, with 1.528 million people tuning in.

Abbie leaves the Bachelor with her head held high and in true Abbie style. What a wonderful Bachelorette. We've loved every moment of Abbie's love story. #TheBachelorAU pic.twitter.com/qNbTMiW1UL

But shortly afterwards, Abbie shared a long pre-prepared post to Instagram, saying she had masked her emotions at the time.

The “second” cameras stopped rolling, “I sobbed. I screamed. I couldn’t breathe,” she said.

She spent “weeks crying” about the failed relationship.

Abbie doubled down on her distress during her Studio 10 appearance, saying she “didn’t enjoy at all” being a main character on The Bachelor.

“I’ve had threats of violence, I’ve had people saying ‘Your mother shouldn’t have had you.’ Hundreds a day,” she said.

“That, in addition to being heartbroken, it’s … yeah.”

After the massive #TheBachelorAU, we chat with runner-up Abbie about Matt's final decision & how she's doing now. 🌹 #Studio10 pic.twitter.com/JbhGMrDxLR

As Abbie brushed away tears, Jono Coleman told her “it’s a TV show” before Angela Bishop tried to hold hands with her.

In a candid selfie video to a private group on Thursday night, Abbie said she had taken the public’s comments “on board” and has been “trying to become a better person from this.”

The months between filming ending and the finale screening have been “rough” and said she’s developed “stress acne” over the last six months.

Speaking to 10 Daily on Friday, Abbie said she is “still not over” her experience and that she thinks she must have loved Matt because she cries “almost every day”.

She said while she’d love to see Chelsie again, she’s not sold on hanging out with her former screen beau.

As to her claim that she’d be over the rejection quickly she said that was “not true” and that she felt “blindsided” when she said it because she was confident she would be the winner.

“I guess I was just really confused and I just kind of wanted an answer as to why.”

The experience hasn’t scarred her so badly though that Abbie will shut the door on future reality TV shows.

“You have Bachelor in Paradise right around the corner,” Nova 96.9’s Fitzy & Wippa told her on air on Friday, suggesting she could film the Ten spin-off in Fiji for next year’s series.

“I think it’s a really good process and I know what I’m doing now,” she said.

Do you guys reckon my love language is physical touch or nah? #thebachelorau

Meanwhile, Matt and Chelsie said they are keen to do “normal things like have brunch together, go for a run or a hike, hang out with mates” now their romance is public.

The pair said their first night together in South Africa after the finale wrapped was as steamy as some of Matt’s TV scenes with other women.

“I was dying to have sex,” Chelsie told KIIS FM’s Kyle and Jackie O show on Friday.

“I am glad we had it a few times in the one night,” Matt added.

The Bachelor’s Abbie Chatfield breaks down after being dumped