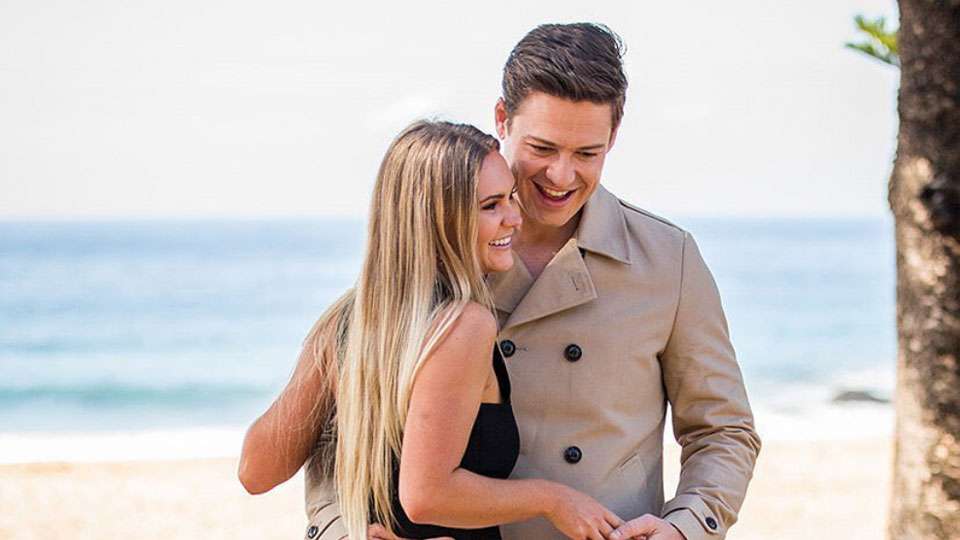 The Bachelor finale opened with pointless shots of wildlife and Matt Agnew running through the savannah with lipstick on; it ended with real emotion and some fabulous reality TV snarkiness.

Snarkiness first. After kicking Abbie Chatfield to the kerb, Matt shed crocodile tears while his defiant rejectee stalked back to the car: “Get me the f–k away from him.”

After Matt told her “my heart belongs with someone else”, Abbie (who pretended last week not to know what Instagram is but may be advertising bronzer online tomorrow) turned stony.

“I feel fine. I couldn’t even cry if I tried right now. Maybe I don’t love him,” she said, the scene after telling him she loved him a super lot.

“I’ll get over this before it even airs. I’m just embarrassed.”

Shortly after the episode screened, she shared a lengthy social media post about the “emotional whiplash” and “dystopian reality” of her experience.

The only way I can describe this moment is complete and utter shock. I was numb. I couldn’t and didn’t want to feel anything. I had felt for weeks that what Matt and I had was real and I trusted him wholeheartedly when he told me how he felt about me. From Hometowns, I forgot the cameras were there. It didn’t feel like we were filming a show at all, it felt like we had this real relationship built in a little bubble of “The Bachelor” and we would be out soon and able to live a normal life. Hearing Matt say “my heart is with someone else” reminded me that we were filming and that Matt had to make a difficult decision, and he did not see in me what I saw in him. I felt silly for ever imagining Matt would love me. It was like emotional whiplash. I was so confused and it felt like I was in a dystopian reality. The second the cameras turned off, I sobbed. I screamed. I couldn’t breathe. I didn’t think think this would be how we would end. I spent weeks crying about this relationship that had almost no closure. I still haven’t fully healed from my relationship with Matt, but I know he and the gorgeous woman he is with are happy, and that’s all that matters. #thebachelorau

Seven seasons in the formula was bucked, with both women being shown getting out of cars before the final verdict was delivered, spinning out the suspense.

Of course, in a perfect world you have both in the same person. Here’s how that played out on The Bachelor.

Who's excited for Finale Week?! It's time Matt's final three put EVERYTHING on the line. Will it be Abbie, Chelsie or Helena? #TheBachelorAU 🙌🏼

Then there was Melbourne chemical engineer Chelsie McLeod, 28, who had not just a home town but a scientific career in common with Matt.

“With her I’m never the smartest person in the room,” he said.

But while they shared interests, they didn’t seem to have a physical spark.

At least, that’s what The Bachelor’s producers wanted us to see, and as usual did a fabulous job. Women over 30 would have been yelling “choose the smart one”.

As an experienced suburban matron, I was. I put it to my husband next to me on the couch: “Always go for the one you want to get on.”

While Matt clearly knows his way around an atom, viewers – and his friends Jason and Kate, who made the trek to South Africa to weigh in on his final women – may have been worried he was less capable picking a life partner.

Not much to do but to smile through the awkwardness, hey Abbie?😬 #TheBachelorAU pic.twitter.com/bJ71GBrIgC

Abbie herself laid it out on their final date, despite Matt’s hair going haywire in the humidity.

“In true form I think Matt and I will have a lot of pashing and maybe some dry humping today,” she said.

“Tomorrow could be the end of the longest dry spell in history.”

The fly in the ointment, even as Abbie made virginity double entendres involving helicopters – then followed up with actressy tears by a bonfire – was Matt’s mate, Kate.

She couldn’t see Abbie fitting in to their older friendship group and was suspicious of her motives: “What do you have in common?”

Good question. Sexual chemistry – although Abbie’s answer was “socialising” – which was less obvious in Matt’s dealing with Chelsie, despite him panting for her intellect.

Again, the editing was terrific and created suspense from banal conversations and situations.

In the end, Matt went for Chelsie.

“You encapsulate everything I’m looking for in a woman,” he told her after she clambered through an arid landscape in an evening dress.

“I love your passion for science. I love how you giggle when you’re nervous. I love that you go full nerd as soon as there’s some maths involved.

“Above all, I just love how you make me feel.”

Matt's path to find love has come to its end and he's chosen the girl of his absolute dreams. Matt + Chelsie = ❤️️ #TheBachelorAU pic.twitter.com/2YyUhCCkL2

Chelsie confessed she’d been “crying all morning”, convinced she would be dumped.

Despite rumours before the finale the reality pair had split, Ten posted a video to Instagram on Thursday night showing them entwined and happy.

Oh, and for those asking if Matt and Chelsie are still together, here's a little video they filmed today, just for you! #TheBachelorAU pic.twitter.com/jeqHz5ooda

“Couldn’t be happier being out in the world,” Matt said, while Chelsea added they’re thrilled to be able to do “the normal thing”.

She also posted a photo and three-word caption to her 91.2k Instagram followers: “I love you”.

Fans of The Bachelor were thrilled with Matt’s choice: 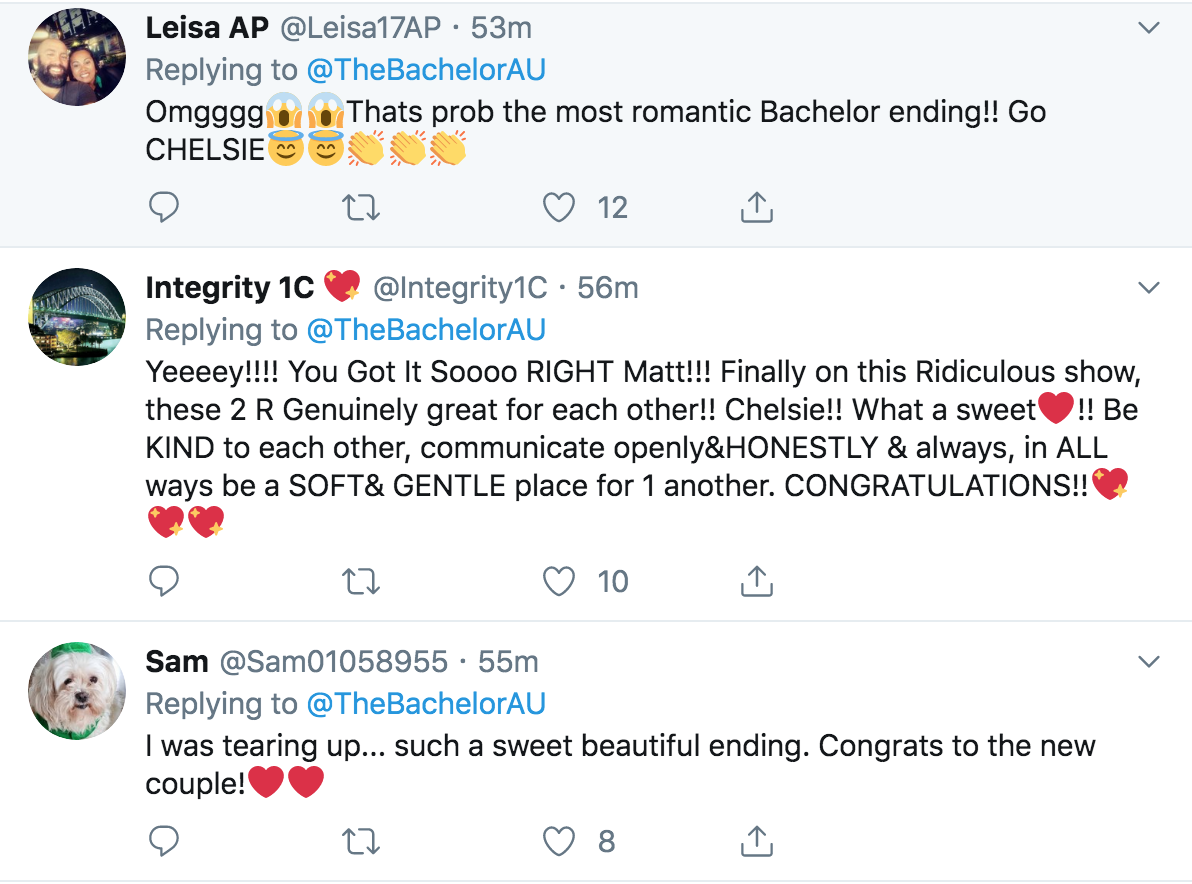 The Bachelor: Matt picks Chelsie as Abbie fumes and fans are in love