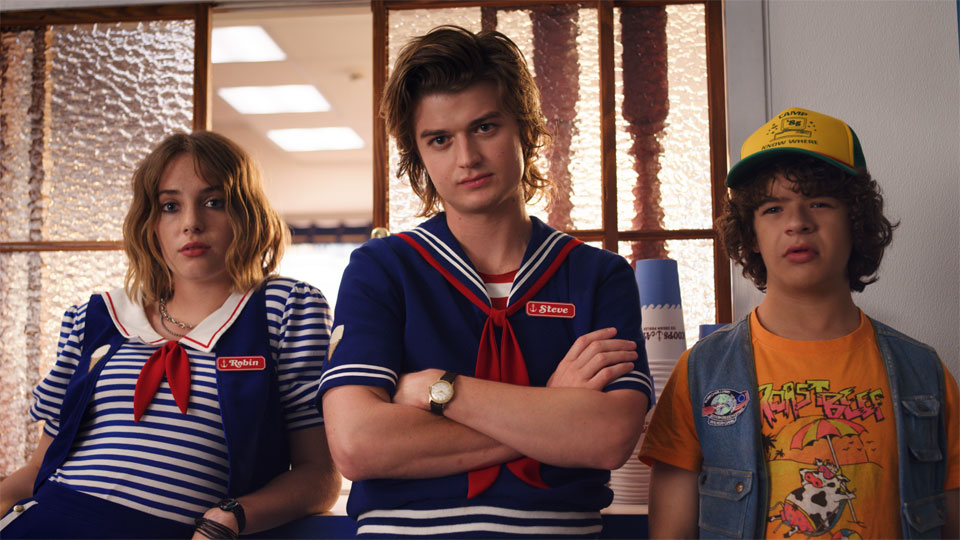 Yes, fist pump! It’s back. After all the hype, the third season of Netflix’s Stranger Things started streaming on Thursday and the wait was so worth it.

Anyone disappointed with the final episode of Game of Thrones need not fret: Stranger’s creators, the Duffer brothers, may have used their ratings upper hand to negotiate bigger-budget special effects but unlike that other show, haven’t sacrificed ripper storytelling for whizbang production.

The best part of that ripper storytelling? The emergence of bully boy Billy (Dacre Montgomery) from the shadows to centre stage.

From being a newbie in Season 2, where he became known for nastiness, swagger and an awesome mullet, Billy now gets a starring role as a douche lifeguard hitting on the mums hanging council poolside.

But that’s just the warm up. Then Stranger Things takes a turn for the dark – and nail biting – and Billy gets dark and scary too, becoming a key figure in the terrifying goings on in Hawkins, Indiana, in the summer of 1985.

What’s new in Season 3? Well it’s 1985, so the Cold War is red hot and like every other race, the Russians want in on the Demogorgon action, having learned nothing from the disasters of the US scientists’ previous seasons of dabbling with the monster.

Then there is the other cold war, the battle of the sexes, as budding journalist Nancy (Natalia Dyer) fights for her rights and the fabulous younger characters experience the tribulations of first love.

All of this is set to the delightfully fluorescent palette of the decade, against a backdrop of infectious 1980s pop. Which just makes the dark, creepy bits that much more effective. There’s a cracker of an ending to episode one.

The firecracker with the most potential to burn those around him is Billy, in a turn that has critics sitting up and taking notice of the 24-year-old man behind the dude, Montgomery.

He’s so hard to look away from he’s drawn comparisons with another son of Perth, Heath Ledger who also featured in more teen fare in 10 Things I Hate About You.

“Australia has a tendency to breed amazing talent, but we haven’t seen anyone remotely as close to Heath Ledger, as Dacre Montgomery,” said website Panda Gossips.

“Like Heath, Dacre Montgomery has the brooding good looks and the instinctual, edgy talent, not to mention he’s a scene eater on Stranger Things.”

And a Reddit post remarks, “I got heavy old Heath Ledger vibes from this guy, he’s also Australian like Ledger. Would also make an interesting Joker I reckon, now I think about it.”

The comparisons are an honour for Montgomery, a fan of the late actor who tweeted in 2017, “An incredible human, an amazing life and a special story.”

Montgomery also found a connection with Ledger on Stranger Things when he met co-star Winona Ryder: “I remember the first thing she said to me was, ‘Oh, I knew Heath.’ That’s her association to Perth. It was really nice.”

WAAPA graduate Montgomery, whose only previous main role was that of the red Power Ranger in the 2017 superhero flick, was not always a heart-throb.

“High school was really tough,” the once-chubbier lad says. “I wasn’t good-looking enough. I didn’t play sport, so it had me in this really unique place.”

But now, the actor, who prefers to live a quieter life when not promoting the show, is beating fans away with a stick, with one commenting on a recent Instagram post, “Happy Father’s Day. This photo got me pregnant.”

And it’s not just Montgomery giving the world a thrill.

“As someone who doesn’t consider herself a hardcore  #StrangerThingsfan, I was completely charmed, grossed out, and thrilled by this new season,” said one Twitter user.

So clear your weekend schedule, find someone you can grab in the scary bits and enjoy the thrill ride of Stranger Things Season 3.