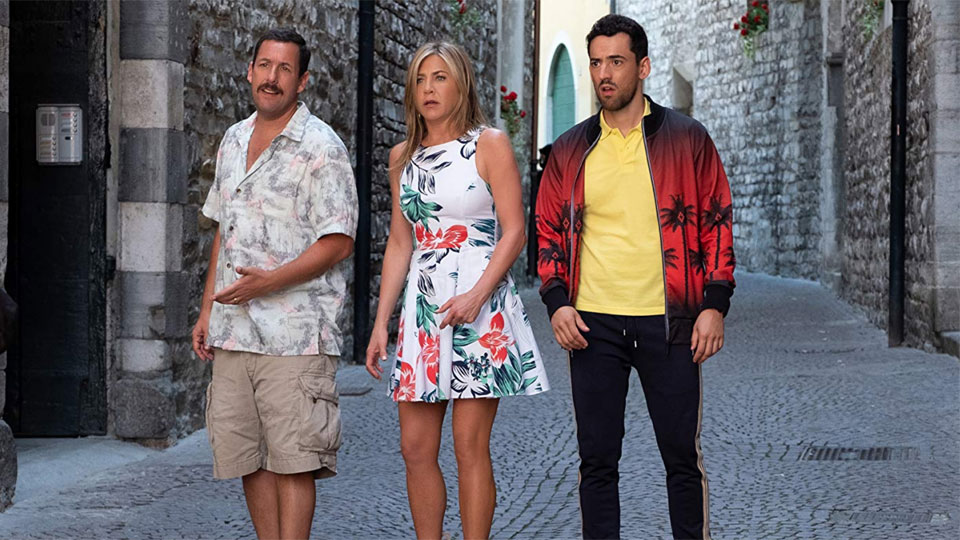 Adam Sandler, Jennifer Aniston and Luis Gerardo Méndez are as surprised by Murder Mystery as everyone else. Photo: Happy Madison Productions

The 97-minute “mediocre” comedy – which only scores a critics rating of about 45 per cent on Rotten Tomatoes (the movie’s audience score is still listed as ‘not yet available’) – was boasted about by Netflix in a tweet this week.

After 12 years of dodging the release of specifics about its viewer numbers, Netflix used its de facto PR Twitter account, @NetflixisaJoke, to hype a claim “30,869,863 accounts watched Murder Mystery in its first three days.”

That made Murder Mystery, whose executive producers include Sandler, Aniston and Chalize Theron, “the biggest opening weekend ever for a Netflix Film,” read the tweet.

That saw viewers chip in. “It was so bad I hate that my watching it counts as a success,” said one Twitter user. Because Netflix doesn’t operate under the traditional Nielsen rating system in the US, the numbers can’t be verified but film historian Peter Labuza is dubious.

“HBO claimed 19.3 million viewers for the Game of Thrones finale,” tweeted Mr Labuza, a doctoral candidate in cinema and media studies at the University of California.

“I have a hard time believing that a Sandler film which only a handful of people I know watched was more popular than Game of Thrones.”

Using the MPAA estimate of a $9 ticket, Netflix is claiming a $120 million domestic opening weekend , theoretically the third biggest opening of the year behind the two Marvel movies.

By Mr Labuza’s reckoning and using the Motion Picture Association of America estimate of US$9 a ticket, Netflix is claiming “a $120 million domestic opening weekend,” he tweeted.

That would make it “theoretically the third-biggest opening of the year behind the two Marvel movies.”

As to why Netflix is suddenly keen to talk turkey, “it wants big stars to work with them and big stars want to be in stuff people see,” is how Alex Weprin of The Hollywood Reporter sees it.

“Hence: talking numbers, ambiguous as they may be.”

What’s not ambiguous is that despite its interesting cast, including Gemma Arterton and Terence Stamp, Murder Mystery is no masterpiece.

It feels dated from the first set up – New York cop Nick Spitz (Sandler) whose idea of romance is an Amazon gift card (cue digs from women about their hopeless men) takes hairdresser wife Audrey (Aniston) to Europe where they are inexplicably blamed for a string of murders.

There’s a dead mogul, a beautiful young trophy wife, a factotum who’s been nursing a grudge, a sponging son, a movie star and some bad shooting.

Along with the bizarre framing of the Spitzes (despite a French detective saying “Here we need evidence to make an arrest”), there are a stack of flimsy plot devices and familiar tropes.

There’s also one unnecessary car chase where a Formula One driver is taken down on winding Italian roads by an amateur in high heels.

The big question is why Aniston’s super-charged Audrey would have spent 15 minutes, let alone 15 years, with her husband, who wears cargo shorts to a black-tie dinner and, in a running joke, is always hungry.

Aniston is as sparkly as always, albeit too ditzy to be authentic, and Sandler turns in his increasingly one note performance. The pair is reduced to saying “I love you” a lot to cover that it’s obvious that’s all they have to say.

The only sexual chemistry is a scene in the first class bar on a plane, when Audrey has a late night boozy rendezvous with flirty viscount Charles Cavendish (Luke Evans).

Adeel Akhtar almost steals the show as a modern Maharajah. Still, the drollest line in the Murder Mystery world went to Mr Labuza: