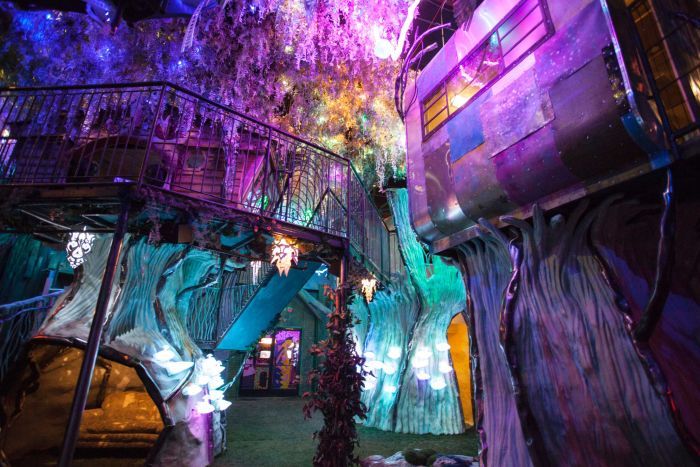 There are 70 rooms to explore — and no map — in the House of Eternal Return. Photo: Meow Wolf

Imagine a theme park where, in place of cartoonish familiarity, you encounter a strange, even cosmic, unpredictability – a sort of “alt Disney”.

Vince Kadlubek, co-creator of The House of Eternal Return, and chief executive of the art collective, Meow Wolf, that runs it, describes the park as “a fantastical multiverse”, “totally whacked-out” and “psychedelic”.

It’s like being “inside of a science fiction novel”, he tells RN’s Big Ideas.

The commercial theme park is bankrolled by Game of Thrones‘ George RR Martin, who has invested millions in it.

Since opening in 2016, the park in Santa Fe, New Mexico has become the most successful attraction in the state.

And while its founders don’t pretend ticket sales are unimportant, they say it’s not the main game.

These artists have a loftier aim than financial profit: they want to change your life.

‘There is no guide, there’s no map’

In the art world of Meow Wolf, visitors choose their own adventure through 70 rooms spread across 16,000 square feet.

The entrance is an old Victorian house, though it’s not quite what it seems.

“The house is the epicentre of a cosmic event that has opened wormholes into other dimensions,” Kadlubek said.

From it, visitors can go in any direction they choose and interact with rooms in any way they like.

See the fridge? Open it and find it’s not just a fridge, but a portal you can step inside.

Move a bookshelf to reveal a secret passageway. Crawl through a washing machine.

“There is no guide. There’s no map. There’s nobody telling you what to do. It’s totally in your control. You have agency,” Kadlubek said.

That concept of agency – of choice – is integral to the park’s design, and to Meow Wolf’s ethos.

“We are dictated by stop lights, rules and regulations, laws, social contracts; and you follow those rules or else you’re kind of antisocial.

“Rarely do we have the opportunity to just go anywhere we want, especially in the context of a commercial experience,” he said.

Consequently, he says, adults grow to lose their childish willingness to experiment with the new and unknown.

“As adults we forget how amazing it is to discover, explore, investigate,” Kadlubek said.

“We are overwhelmed with predictability.”

He says being immersed in something entirely unpredictable is a perfect antidote.

“When we have those moments where we can find spontaneity, that’s where excitement happens,” he said.

But he also believes it’s revelatory – and says people’s interaction with the park’s fridge is evidence.

For Kadlubek the fridge represents the possibility “that there is a world out there that is different than what has been sold to you”.

“I get to step into new possibility, and that’s transformational; that’s mind-blowing for people, this small act.”

‘Walking a line between art and entertainment’

If offering someone a “transformational” experience seems like a big responsibility, it’s not one Kadlubek takes lightly.

He also acknowledges that by charging an admission and “walking a line between art and entertainment” Meow Wolf opens itself for criticism.

He embraces the scrutiny.

“We are saying that we want to make a difference in the world. We are not a company that’s just saying, we want to sell a chicken sandwich.

“We want to change the world. And when I say that, that means that I am a target for every time we are not changing the world.

“And I say, awesome. Bring it. Because more companies should be a target for that criticism.

“More companies should put themselves up on stage and say: ‘You tell me how I can be better at trying to change the world’.”